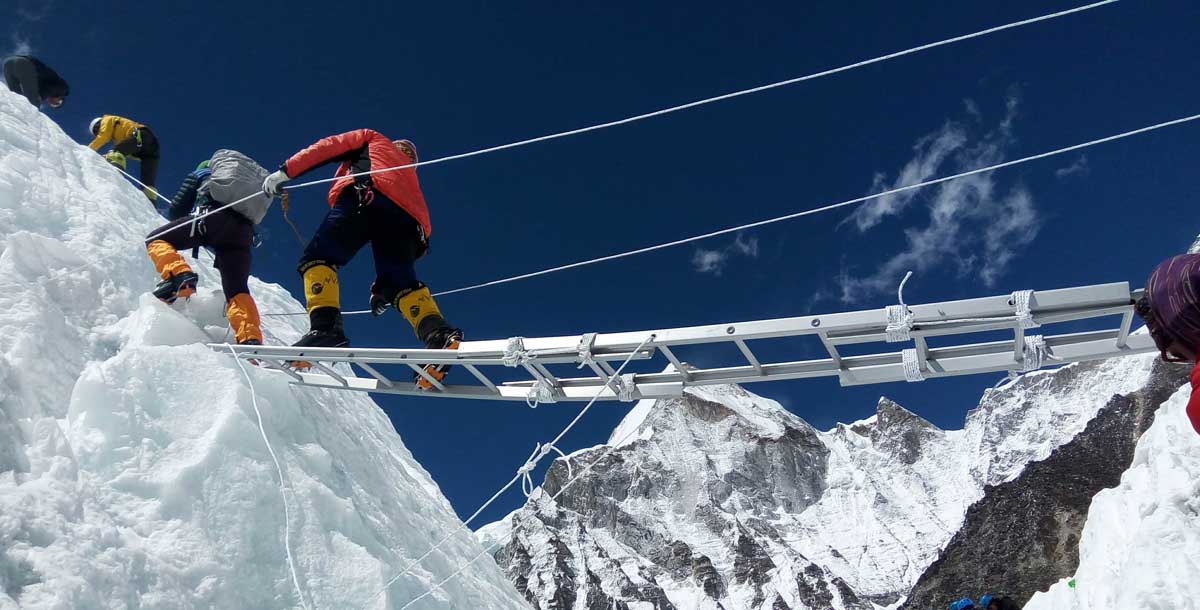 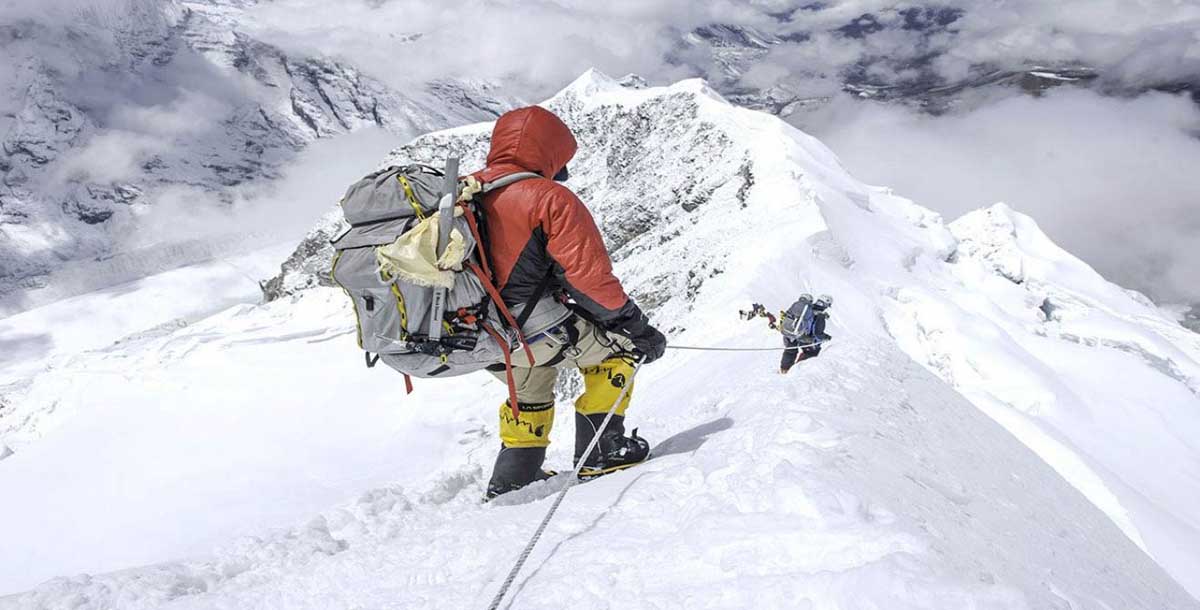 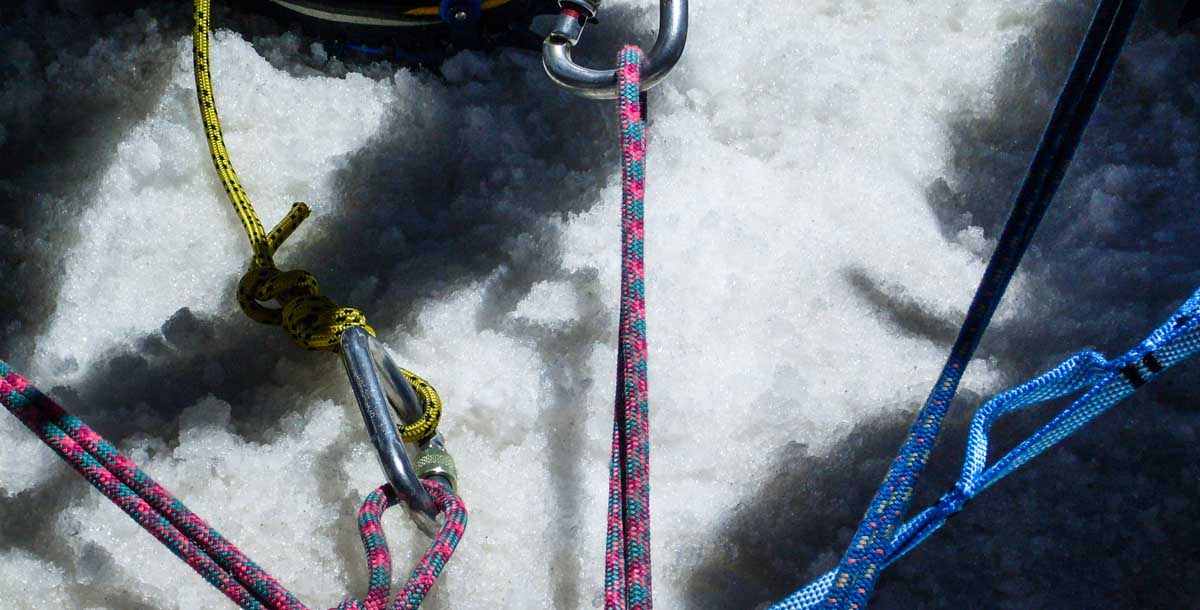 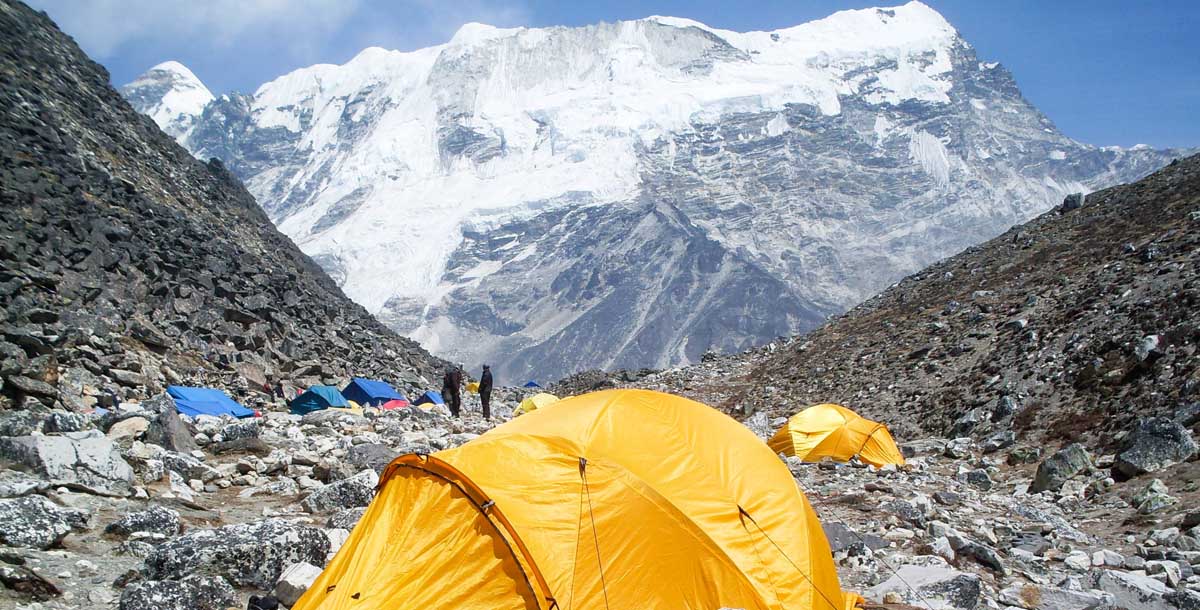 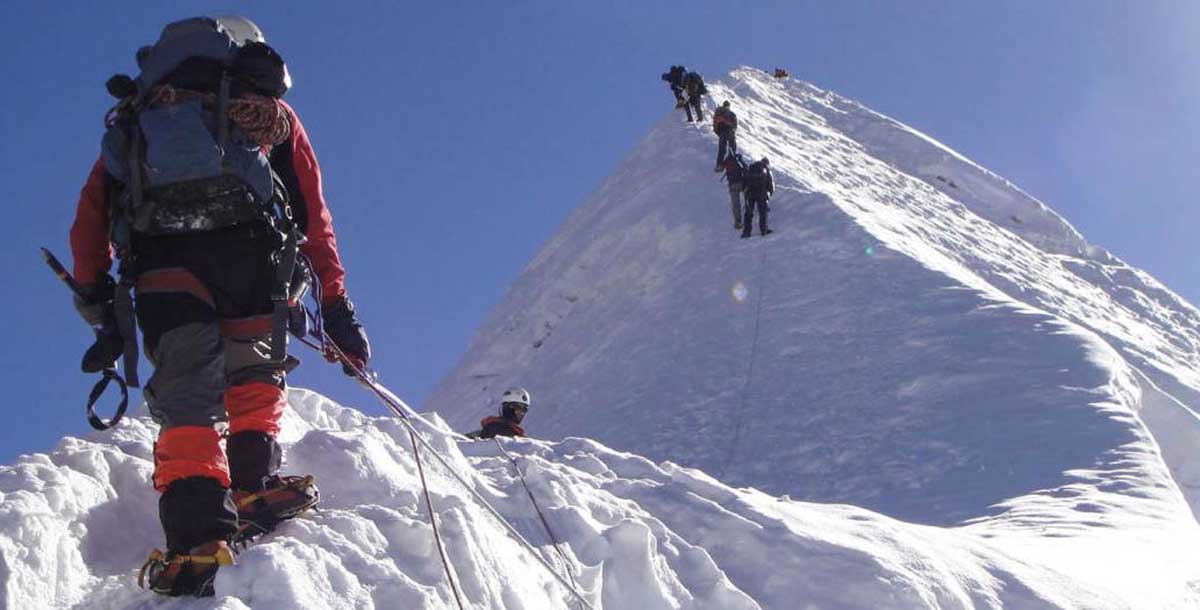 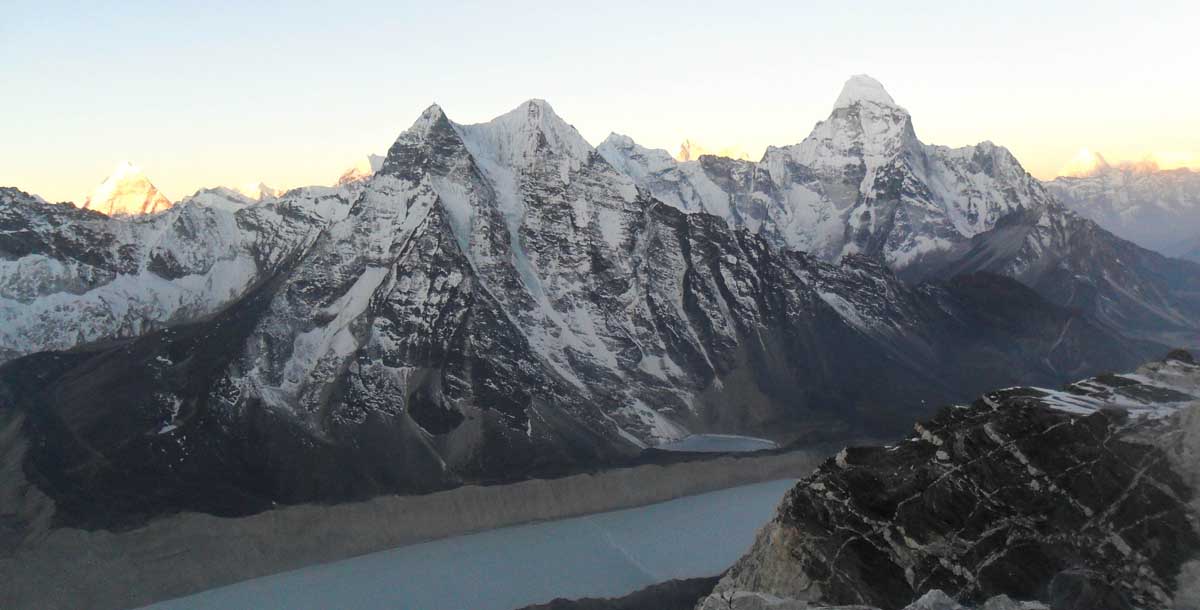 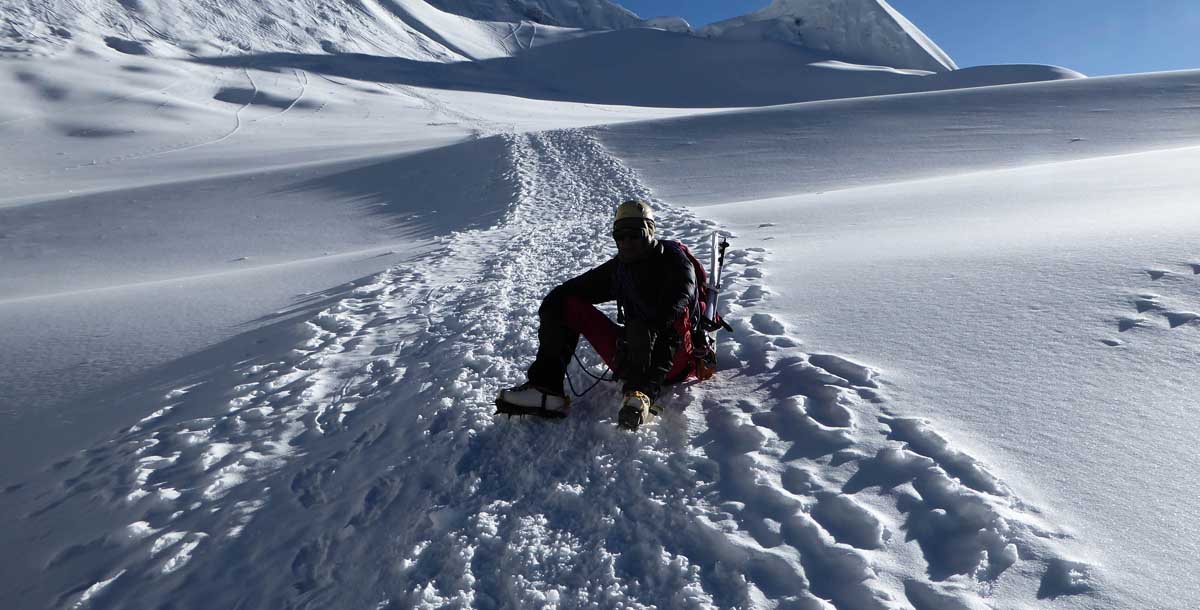 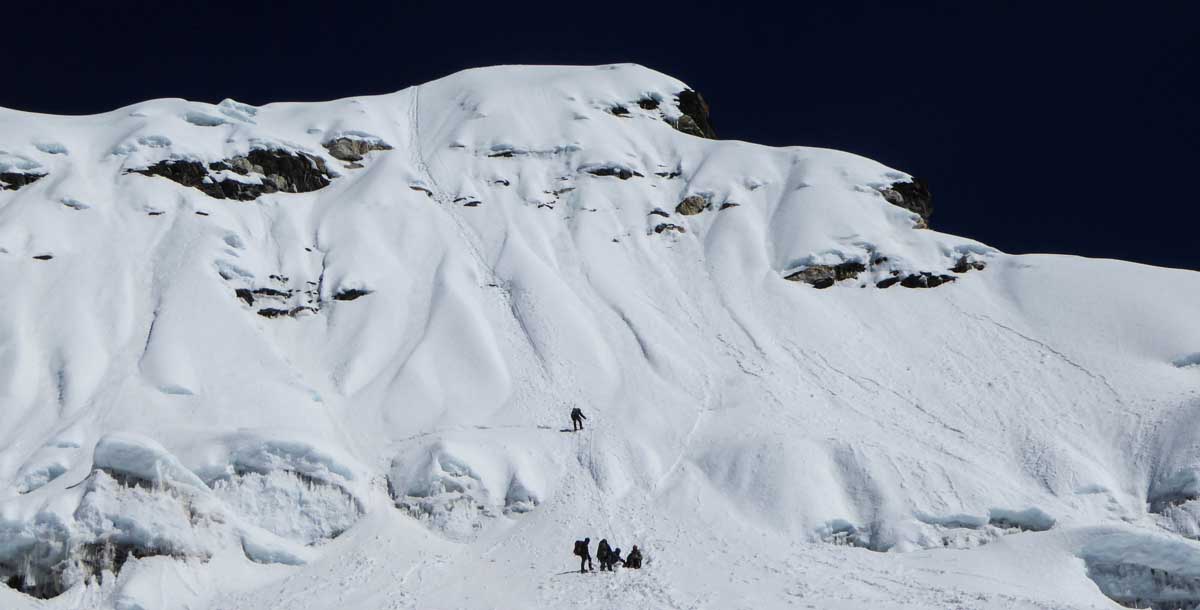 Imja Tse, Island peak (6160m) is the best trekking peak in the Everest region for novice climbers to develop the skills of climbing on snow and ice at high altitudes.

Island Peak is the number one rating climbing peak in the Everest Region of Nepal which has (6,189m/20,305ft) heights. It is also known as Imja Tse.   It is the extension of Lhotse Shar which is very popular for trekking trails that can be reached crossing Everest Base Camp. The name of the peak is Island because it is located on the top of Chhukung Glacier, the peak is very challenging for climbing but it is rated ‘moderate’; and although a good level of physical fitness is essential, previous climbing experience is not required.  From Dingboche, the Himalayas and Island Peak are clearly seen as a pyramid of ice and rock. The Himalayan ridge rising to the south from this point leads to the summit of Island Peak.

Island Peak Climbing and Trekking duration provide not only provides an enjoyable climb but also can see some of the most jaw-dropping scenery of the Himalayas in the Khumbu region which are the giant mountains, Nuptse (7,879m), Lhotse (8,501m), Lhotse Middle Peak (8,410m) and Lhotse Shar (8,383m) make a semi-circle in the north. One can see the views of Makalu (8475m) in the east, Baruntse and Ama Dablam in the south. Island Peak Climbing has provided many more opportunities of viewing the Giant Himalayas and peaks of the Everest Region.

If you are not experienced in climbing don’t worry we are here for you. Our well-experienced climbing guides will support and guide you in all situations during your summit and trekking. It is well said that every mountain top is within reach if you just keep climbing. Please don’t hesitate to contact us for more information regarding this trek and climbing.

Why Imja Tse is called Island Peak?
The original name is Imja Tse in the Sherpa language and still, they call it Imja Tse. This peak is surrounded by icy mountains which appear as an island in the middle of the glaciers when you look from the Dingboche village of Khumbu Region. Later in 1953 Imja Tse is named Island Peak by members of the British Mount Everest expedition. So, Island Peak became more familiar within the mountaineering industry.

Contact us to customize your trip - Customize My Trip

The Highlight of the Trip

Upon your arrival at the Tribhuvan International Airport in Kathmandu, you will be welcomed by a representative of the Himalayan Wander Walkers. You will be checked into your hotel. You will meet our trekking operator for briefing about the entire trek on this day. You can either rest or hang out around a famous tourist area in Kathmandu, Thamel. Overnight at hotel set with BB plan.

Your trek to Everest base camp starts from today and you will be transferred to the airport and will enjoy a 40min short scenic flight to the Himalayan foothills. The views from the plane are stunning, providing dramatic sights of terraced hills and the distant giant Himalaya. After landing at Lukla airport, we walk for 3 hours to the town of Phakding with few ups and downs along the Dudh Koshi River. Overnight: at teahouse. Meal: three times a day.

After breakfast, we continue trekking along the bank of the Dudh Koshi River and crossing this majestic river numerous times on exciting suspension bridges decorated with prayer flags. After entering Sagamartha National Park, from Larja Dobhan, the trail climbs up steeply with breathtaking views to Namche Bazaar, the gateway to the Everest region. Overnight: at teahouse. Meal: three times a day.

Today is a rest and acclimatization day in Namche Bazaar. Namche is a colorful village with many wonderful and interesting shops and vendors, fabulous food, and stunning views of the surrounding mountains. An early hike above town, before the clouds move in,  reward trekkers with a spectacular Himalayan sunrise and views of Mt. Everest, Lhotse, the beautiful Ama Dablam, and many more. On the way down, we can visit the Sherpa Museum that houses an exhibit on a traditional Sherpa lifestyle and a fabulous photography display by a local Nepalese naturalist.

Today we will trek to Tengboche which is a beautiful day to walk. The trial is easy till Phunki and from there we climb to Tengboche village after crossing the Dudh Koshi River. Tengboche is famous for its monastery which is the biggest monastery of the Everest region. It is located within the Sagarmatha National Park which is a UNESCO World Heritage Site. The monastery is blessed with panoramic views of the Himalayas, including Mt. Everest, Nuptse, Lhotse, Ama Dablam, and Thamserku. We will visit the monastery and the village in the afternoon.

The trail descends and passes through lush forests of birch, confer, and Rhododendron trees with the spectacular views of Mt. Everest, Lhotse, and Ama Dablam which help to energies your trek. Then the path goes downhill to Debuche and crosses the Imja River to reach Pangboche. We choose the upper Pangboche trail and admire the Himalayan vista and the Pangboche Monastery. We continue our walk to the Imja Valley and Lobuche River before ascending to Dingboche. It is a breathtaking village with beautiful barley, potato and buckwheat field complete with grazing animals dotted along with those fields.

Spending a day in Dingboche will help us to acclimate to the high altitude. On this free day, we climb a ridge located behind the village and see six of the world’s tallest peaks including Lhotse, Makalu, and Cho Oyu. Furthermore, we can also admire Cholatse and Taboche peaks. On our north-west we see more Himalayan peaks rising above the Khumbu Khola Valley. From another location on the ridge, we can also admire the picturesque Imja Khola Valley and the beautiful Dingboche village.

Today we will walk to the Chhukhung Valley which is situated unswerving lower than a huge rock wall that connects Nuptse with Lhotse. From here, you will have magnificent views of Amadablam (6856 m.), definitely, the most photographed peak in Nepal. Overnight: at teahouse. Meal: three times a day.

We then walk beside the Imja Khola to reach Pareshaya Gyab, a pleasant place nearby a small lake with very beautiful views of the Nuptse-Lhotse wall and Lhotse Glacier. Once we set our camp here you can keep your climbing stuff in order and get ready for your climb of the peak tomorrow.

We will begin walking up today early in the morning to reach the summit of Island peak. Here our walk becomes difficult once we arrive at the base of the sharp icefall beneath the peak. A great concern must be realized while going up the wall to come out on the periphery leading to the summit. After arriving at the summit, you will walk down to the Base Camp.

Today is easier to walk to descend to the lower altitudes. Following back the same route back as we came up. Overnight: at teahouse. Meal: three times a day.

The track today will go down quite abruptly as we walk back to Namche Bazaar. To arrive at the camp and to reach our overnight spot, we will have a steep climb. Overnight: at teahouse. Meal: three times a day.

We take our lunch in Phakding today and make the final way up to Lukla which becomes a surprise for the majority of the trekkers. We arrive at the airport in the early afternoon. Lukla is famous for celebrating the end of the trek. Overnight: at teahouse. Meal: three times a day.

Lukla to Kathmandu by Flight

We will wake up early in the morning and get ready for the entrance of our plane for returning back to Kathmandu. Then, we will transfer back to our hotel. Remaining day to explore in Kathmandu, Overnight at hotel set with BB plan.

Fly back to your home country.

Your stander meals (Breakfast, Lunch, and Dinner) during the trekking.

All accommodations in lodges/tea houses during the treks.

An experienced, helpful and friendly Trekking and Climbing Guide, porters

Arrangement of Emergency Helicopter service which will be paid by your Travel insurance company.

Tips for the guide and porter.

Peak climbing is a second step after the normal trekking who wants to experience the adventure beyond the trekking. There are more than 1300 peak with 6000 meters among which only one quarter of them are officially opened for climbing Nepal government.

Apart from mountaineering expedition, we also offer numbers of trekking peaks with altitude ranging between 5000m to 6600 for well experienced trekkers and beginner climbers. It obvious that all kind of climbing need technical skill and experience guide which Himalayan Wander Walkers provides you. Peak climbing in Nepal offers the best adventure trekking and expedition experience to all kinds of Himalayan Wander Walkers is a specialized in organizing climbing training course at base camp before the summit start.

Guiding, Food, and CampingIn Nepal, all trekking supplies - camping equipment, kitchen implements, food - are all carried by pack animals like mules, Yaks, and horses. Even Porters are common in Nepal. All trekkers are accompanied by a guide, a cook, and usually at least one horseman or yak herder. With the surest footing; they lead trekking groups across the passes. The horseman and cook will usually run ahead during a trekking day. They will have prepared a packed lunch for hikers and will go on to the night’s resting place to set up camp. They set up tents, cook dinner, and ready the area for arriving trekkers. When trekkers reach the campsite they are greeted with a hot cup of tea and biscuits in the dining tent. After six hours in the mountains, no drink will ever taste sweeter. For dinner, the cook will usually prepare a buffet of dishes that are as welcome as they are delicious.

Note regarding itineraries.Although we generally adhere to the schedule, the itinerary is subject to change for numerous reasons beyond our control, including weather and terrain conditions, suitable campsite availability, and the group's general fitness level. It is important to understand that our trek is logistically complex and it is not unusual that adjustments be made. Our guide will orient you each evening to the following day's plan; their good judgment is the key to the long history of successful treks that Himalayan Wander Walkers has led till now. Please remember that our ability to make adjustments as needed helps to ensure that your trek is successful.

How Can i identify Peak and Mountain?

Literary any mountain that is below 7000 meters is considered as a Peak. The Nepal Mountaineering Association (NMA) is a sole responsible for classifying certain peaks as trekking peaks. All the trekking agencies have to abide the rules and regulation conducted by NMA.

Mera Peak Climbing is the highest trekking peak among all trekking peaks in Nepal with a height of 6,476 meters. Mera Peak is hidden in the upper Hinku valley of Makalu Barun National Park. Mera Peak doesn't need much technical knowledge as it can be climb by novice climbers and mountaineers. Jimmy...