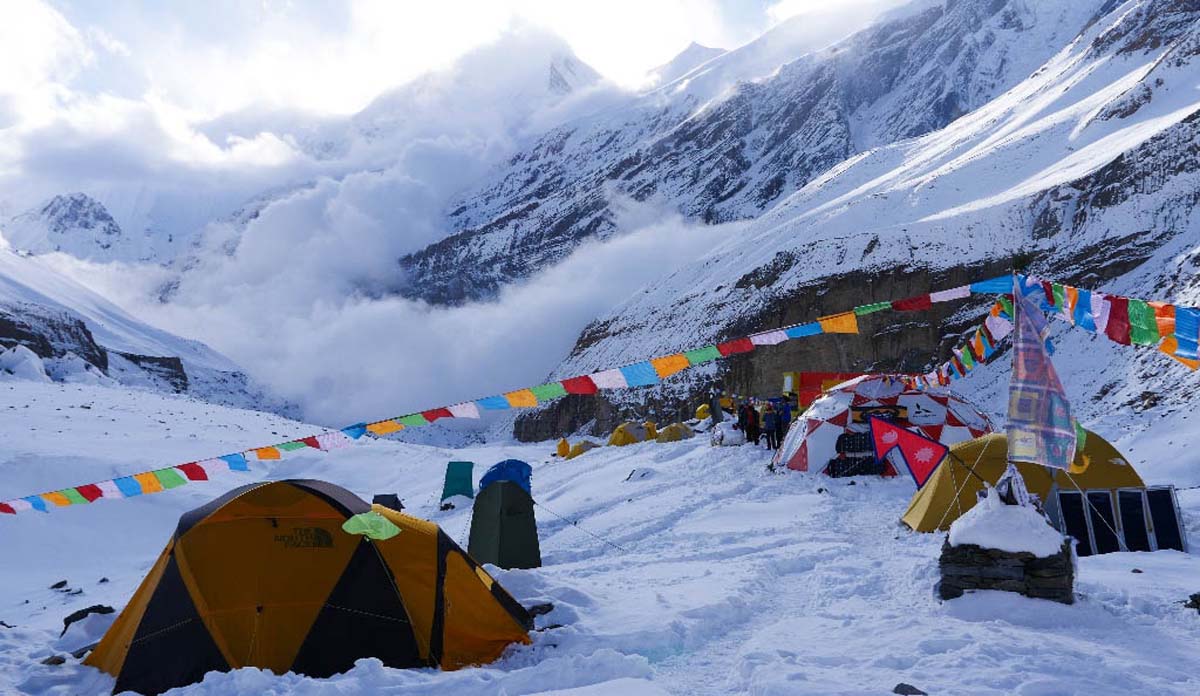 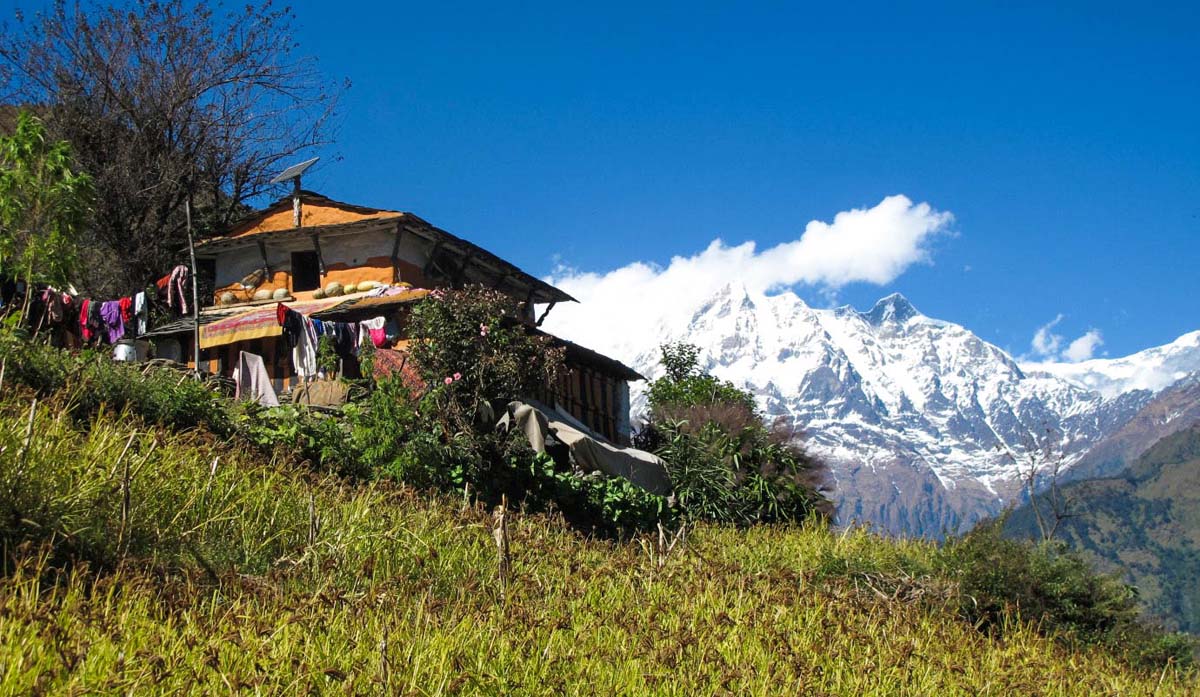 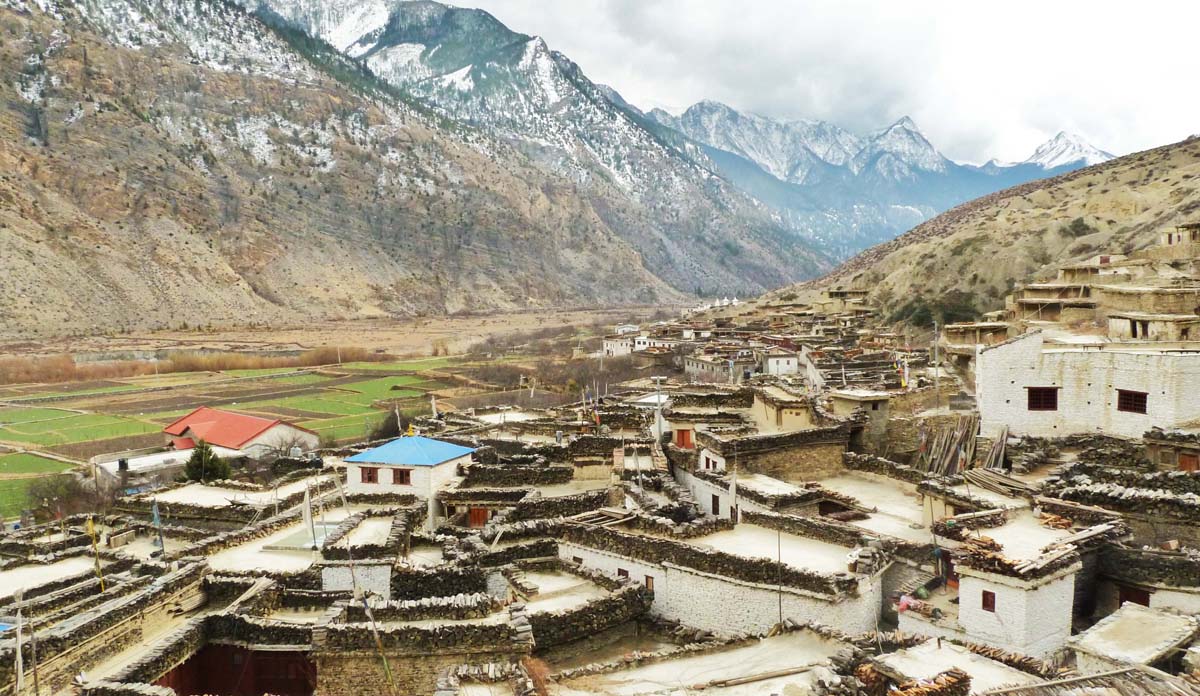 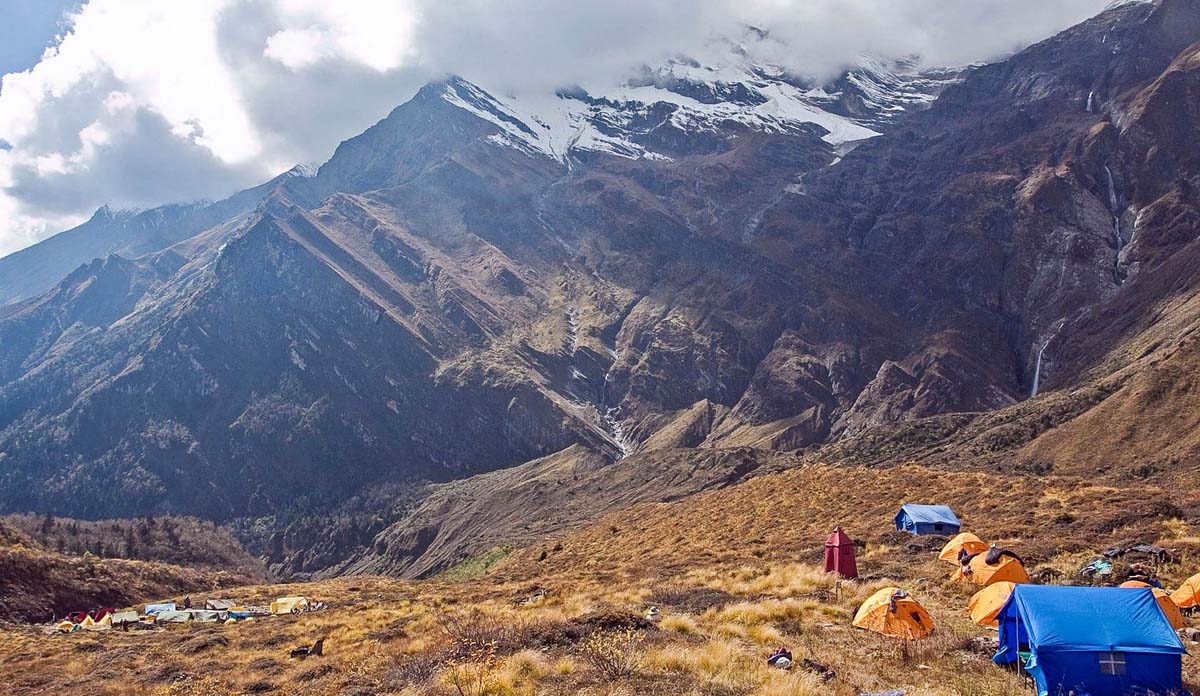 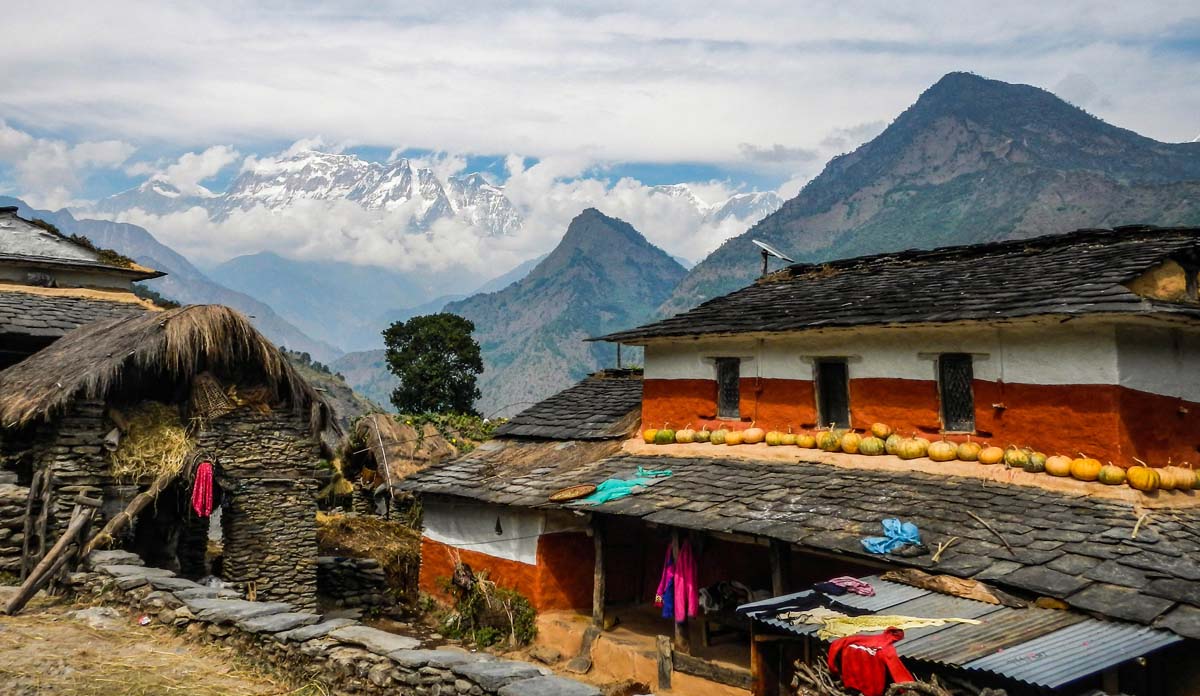 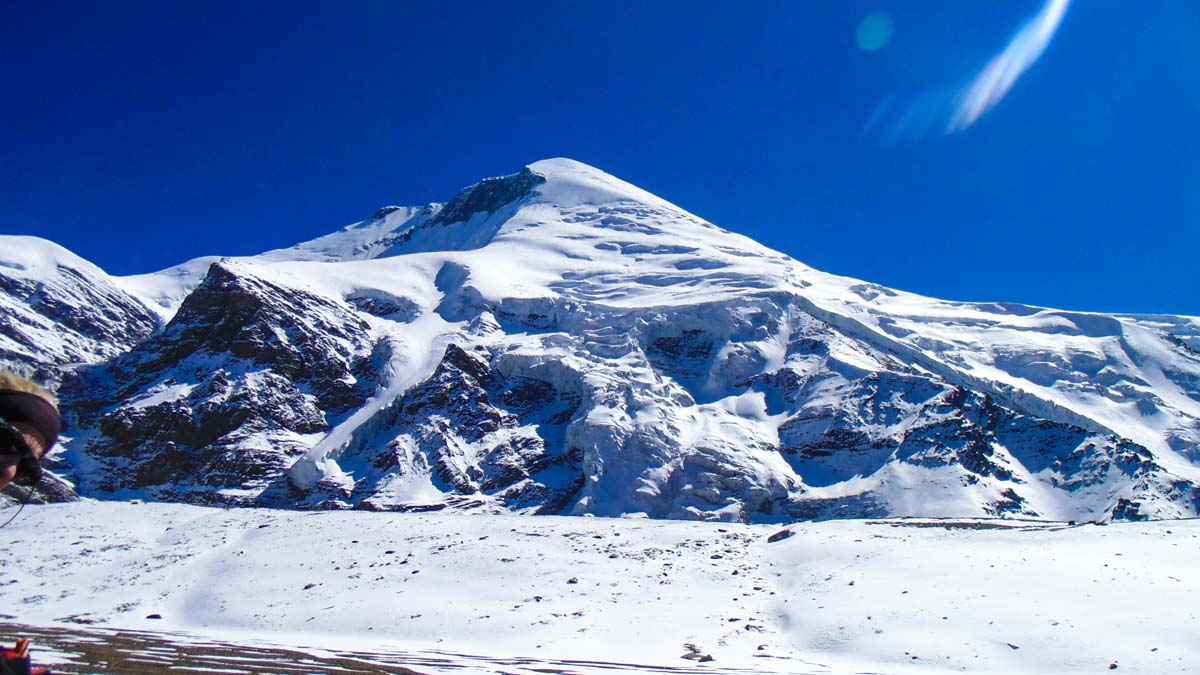 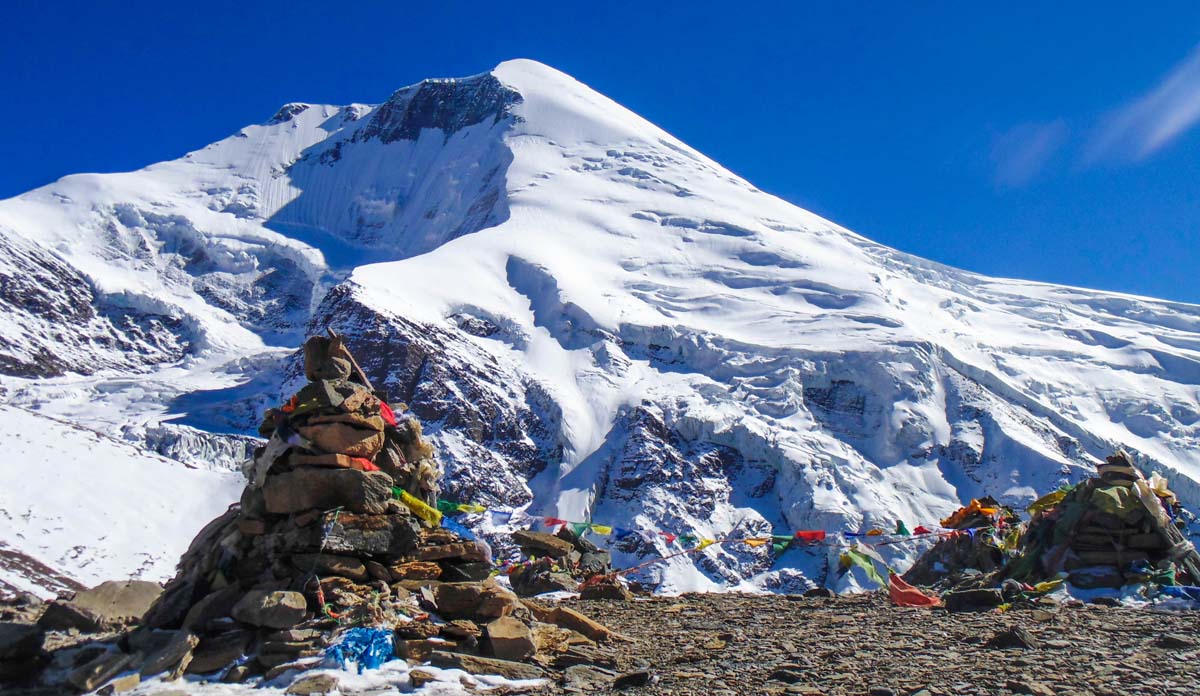 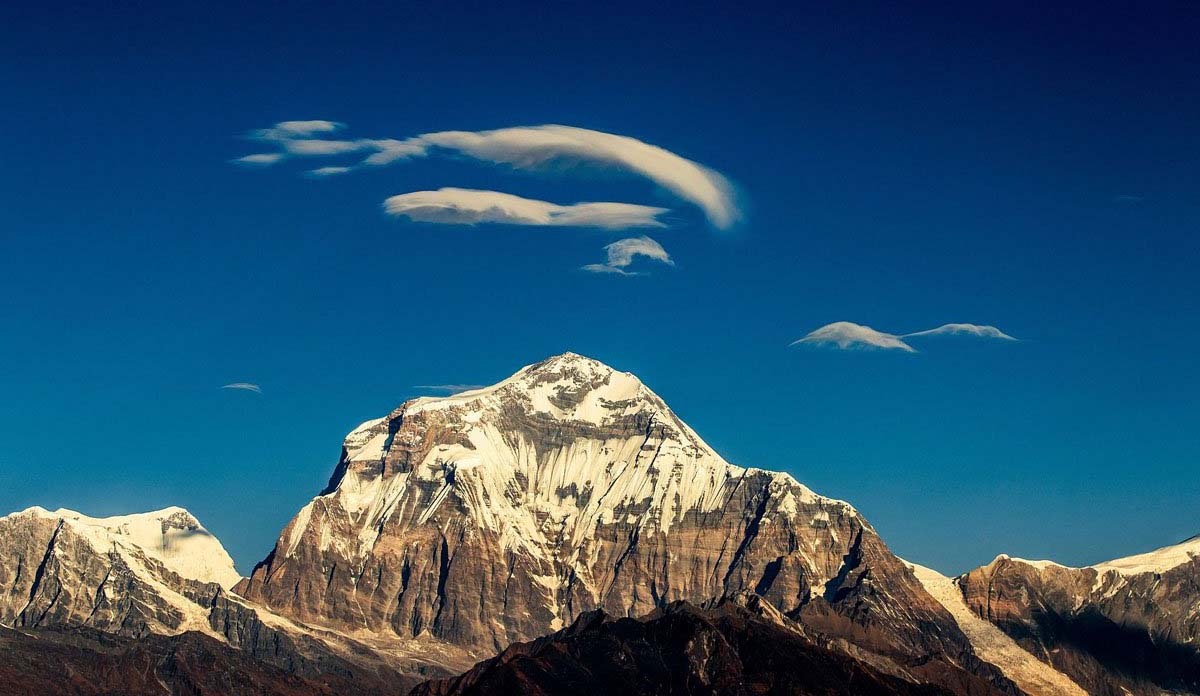 Dhaulagiri Circuit Trek lies between the Dolpo and Mustang Region of Nepal. This trek makes a clockwise round to Mount Dhaulagiri (8,167 meters), the seventh highest mountain in the world. Since 1950 AD this area was opened for trekking and first discovered by the team of French Expedition. During the discovery of Dhaulagiri in 1808 AD, the western explorer team thought it was the highest mountain in the world. After decades of years, Everest was discovered and officially became the highest mountain on earth. It is one of the most adventurous and challenging camping treks in Nepal. Thus, Himalayan Wander Walkers organized a full camping trek to the Dhaulagiri circuit with the support of our Sherpa team.

Dhaulagiri Circuit Trek offers an incredible view of Massif Mount Dhaulagiri, Tukuche Peak, Dhampus Peak, and even vistas of Nilgiri and Annapurna from the Mustang side. This trek is not only limited to the mountains but also the places that en route the journey to Dhaulagiri are worth visiting. The trail passes through beautiful Magar villages in the west of Dhaulagiri, lateral moraines, glaciers, scenic passes, and the Kali Gandaki valley of Mustang. This trek is a perfect destination for trekkers who love to explore the unspoiled and less traveled region in Nepal. The best time or season to do this trek is in spring (late March to May) and autumn (late September to Mid November).

The clockwise route is popular for the Dhaulagiri circuit or round trek. The journey begins from the capital of Nepal, Kathmandu, and driving to Dharapani via Pokhara. Actual walking starts from the Dharapani (Margar settlement above the Darbang Hill) to Sibang, Boghara, and further to Dhaulagiri Base camp. The journey gets harder when you reach the glacier area. After spending overnight in all three base camps of Italian Base Camp, Japanese Base Camp, and Dhaulagiri one Base camp you will head to a hidden valley crossing the French Pass at 5360 meters. Then you will again cross the Dhampus Pass at the height of 5258 meters and descent to Marpha village.  After the successful trek of Dhaulagiri, you will fly back to Pokhara from Jomsom and relaxation day in Pokhara. Next morning drive or fly to Kathmandu.

Arrival in Kathmandu-Transfer to Hotel, Welcome assistance by Himalayan Wander Walkers' representative at the Tribhuvan International Airport and transfer to hotel, rest at the hotel, and briefing about the trip.

Today after breakfast we will start the city tour to most historical and spiritual attractions in Kathmandu. These landmarks are considered World Heritage Sites; including the historic Hanuman Dhoka Durbar Square, the sacred Hindu temple of Pashupatinath, the famous 'Monkey Temple' (Swyambhunath), and the world's largest Buddhists stupa, Bouddhanath. Briefing regarding the trek with two-way question-answer with the trip leader (The Guide).

Our trekking guide will pick you from your hotel and transfer you to the Tourist Bus station around 6:30 am and the bus will depart from Kathmandu after 7:00 am. It takes 6 -7 hours to reach Pokhara.

Overnight accommodation with a BB Plan is arranged.

Today you will have breakfast at your hotel and drive to Dharapani into the Kali Gandaki Valley and up the tributary Myagdi Khola valley as far as Darbang situated at an altitude of approximately 1100 meters. Drive further to Dharapani where the first camp of the trip is set.

Today we will hike to a place called Muri. Six hours of ascending and descending hiking will take us to Muri. As we finish up with our breakfast at the campsite we will pack our stuff and will start descending passing through the various villages. After hiking downhill for some time, we will reach a suspension bridge. Crossing the suspension bridge the trail will ascend uphill. Walking along this uphill trail we will reach Muri. It’s a small village which is mostly inhabitant by Magar people.

Our trail starts along the descending cliff where we will cross a river and then continue along the terraced field. Climbing a ridge we will reach a pass and enjoying the views we will descend to Myagdi Khola and walk along the western bank to the village of Naura. From here, we will climb steeply to the hill and then descend along with the forests and terraced fields to reach Boghara. Overnight stay at tented in Boghara.

Today, the trail is difficult and we will trek under the full guidance of our trek guide. On leaving Boghara we will descend along with the forests and the terraced fields to Jyardan. Crossing Jyardan, we will trek along the winding rocky valleys and then we will steeply descend before climbing to the Lipase. We continue to climb along with the forests to Pilangkos Kharka and then finally climb to Dobhan. Overnight stay at tented in Dobhan.

Leaving the Japanese Base Camp, we will head towards the rough trail which is slippery covered with snow. We will carefully and slowly cross the glacier to reach Dhaulagiri Base Camp. We will be following the route along the Chhongardan Glacier and can get the views of the Tukuche peak (6920m) on the way.

Acclimatization and rest day at Dhaulagiri base camps

Our legs are hurting from yesterday’s uphill climb so this rest day will help us to recover. We will explore around Dhaulagiri Base Camp. You will also adjust to altitude if you are to explore around the Camp. If you climb a bit above Camp you will get a spectacular view of the Dhaulagiri Range. After exploring around for while we will return to base camp for the rest. Stay overnight at tented camp.

Today, we will start our trek in the early morning and follow the trail which passes through the left side of the Chhongardan Glacier. We will climb along the steep lateral moraine ridges and continues to ascend to the French Pass (5360m) enjoying the panoramic views of the Tukuche peak (6920m) and Mt Dhaulagiri (8167m). We will head towards the top of the pass which has multi-colored flags. Enjoying the panoramic mountain views we will descend along the moraine lateral ridges to the hidden valley.

Today, we will follow the trail which climbs up to the snowy mountain which heads toward Dhampus Pass. Crossing the pass we will steeply descend along the trail entering the Kali Gandaki Valley. From where we will descend further to Yak Kharka relishing the views of Annapurna and Dhaulagiri ranges.

We will follow the descending trail from Yak Kharka taking us to Marpha which is also known as the Apple Garden. From Marpha we will walk gently to Jomsom. It is a commercial hub for the trekkers of Muktinath, Upper Mustang with several tea houses and hotels. Also, the locally prepared apple brandy, Marpha, is a famous drink here.

Stay overnight at the lodge.

We take an early morning 20min flight from Jomsom to Pokhara; the guide will transfer you to the Hotel there in BB Plan. The day we give you a chance for exploring the beautiful Pokhara valley with its natural and cultural beauty.

Overnight at the hotel with a BB basis.

After having breakfast your trip starts with a drive back from Pokhara to Katmandu by tourist Coach about 6-7 hours driving (or take a short 30-minute flight) and overnight is arranged in Kathmandu as per the agreed category with BB Plan. In the evening Himalayan Wander Walkers will invite you to join in a farewell dinner in a typical Nepalese cultural restaurant.

Overnight at Hotel with BB basis.

Airport Arrivals and departure transport by car (We will collect you from the Kathmandu international airport) and transfer to Hotel.

3 nights’ accommodation (2 persons per room) in Kathmandu and 2 Nights in Pokhara with breakfast.

All land transportations (a private car/bus) 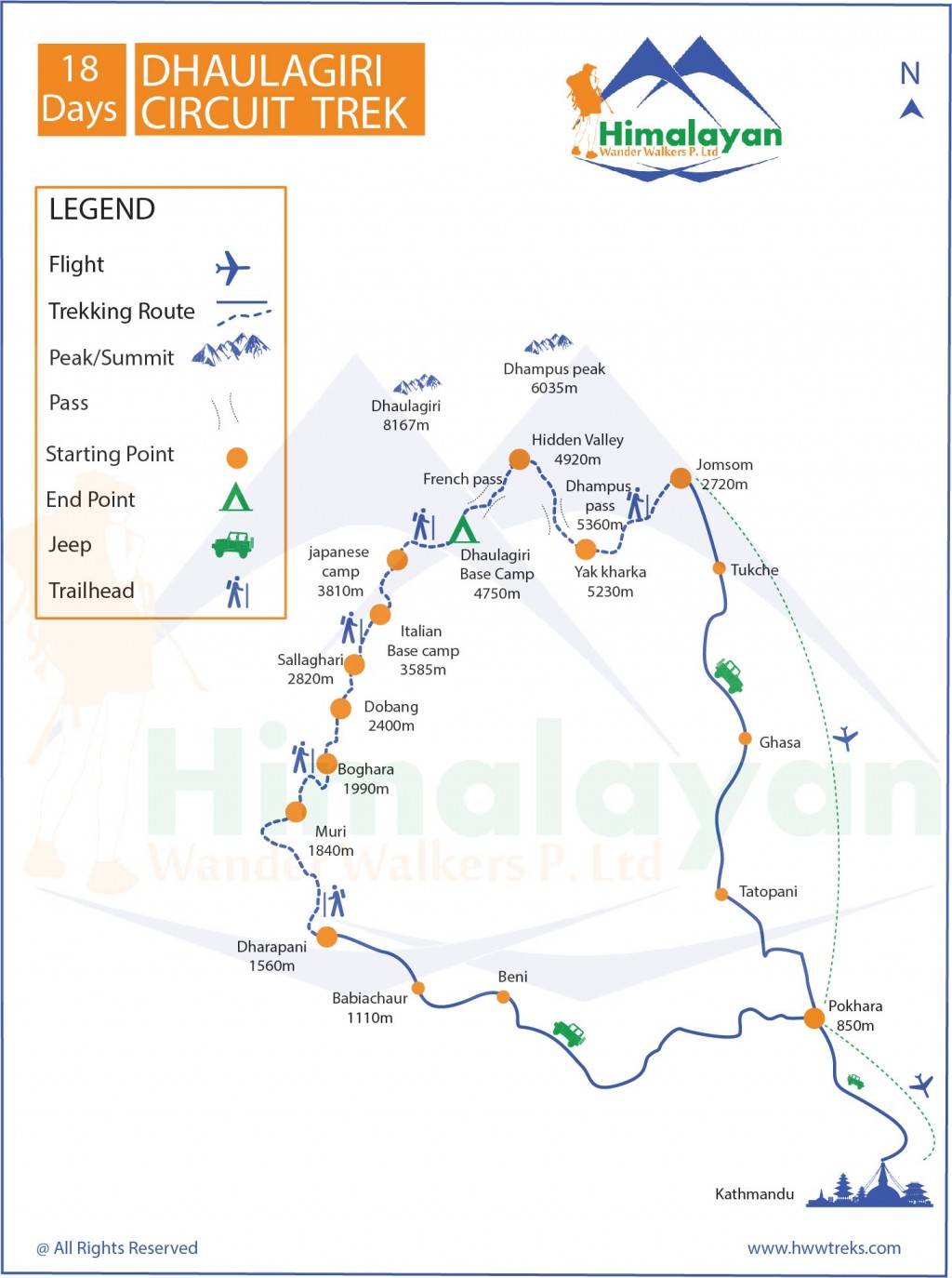 * The Price given here is per person based on a minimum of 2 pax. The price will be cheaper with an increase in the number of people.

* Single Supplement is applied (incase if you are single trekker)

Guiding, Food, and Camping In Nepal, all trekking supplies - camping equipment, kitchen implements, food - are all carried by pack animals like mules, Yaks, and horses. Even Porters are common in Nepal. All trekkers are accompanied by a guide, a cook, and usually at least one horseman or yak herder. With the surest footing; they lead trekking groups across the passes. The horseman and cook will usually run ahead during a trekking day. They will have prepared a packed lunch for hikers and will go on to the night’s resting place to set up camp. They set up tents, cook dinner, and ready the area for arriving trekkers. When trekkers reach the campsite they are greeted with a hot cup of tea and biscuits in the dining tent. After six hours in the mountains, no drink will ever taste sweeter. For dinner, the cook will usually prepare a buffet of dishes that are as welcome as they are delicious.

Gurja Khani-Dhorpatan Circuit is one of off-the-beaten- treks, a combination of cultural and scenic passes for Mountain View. This trek is located in the Dhaulagiri Region. It is dominated by the huge mountain-like south face of Dhaulagiri Himal (8,167 meters), Gurja Himal (7193m), Putha Himal...