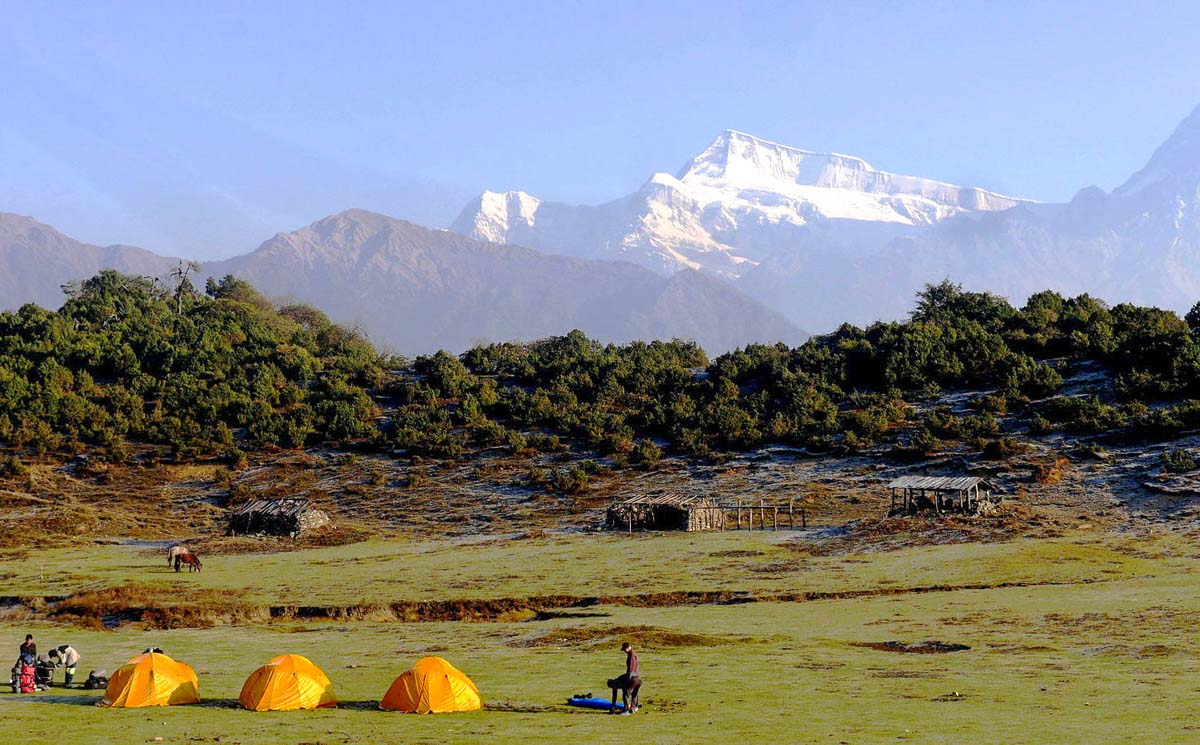 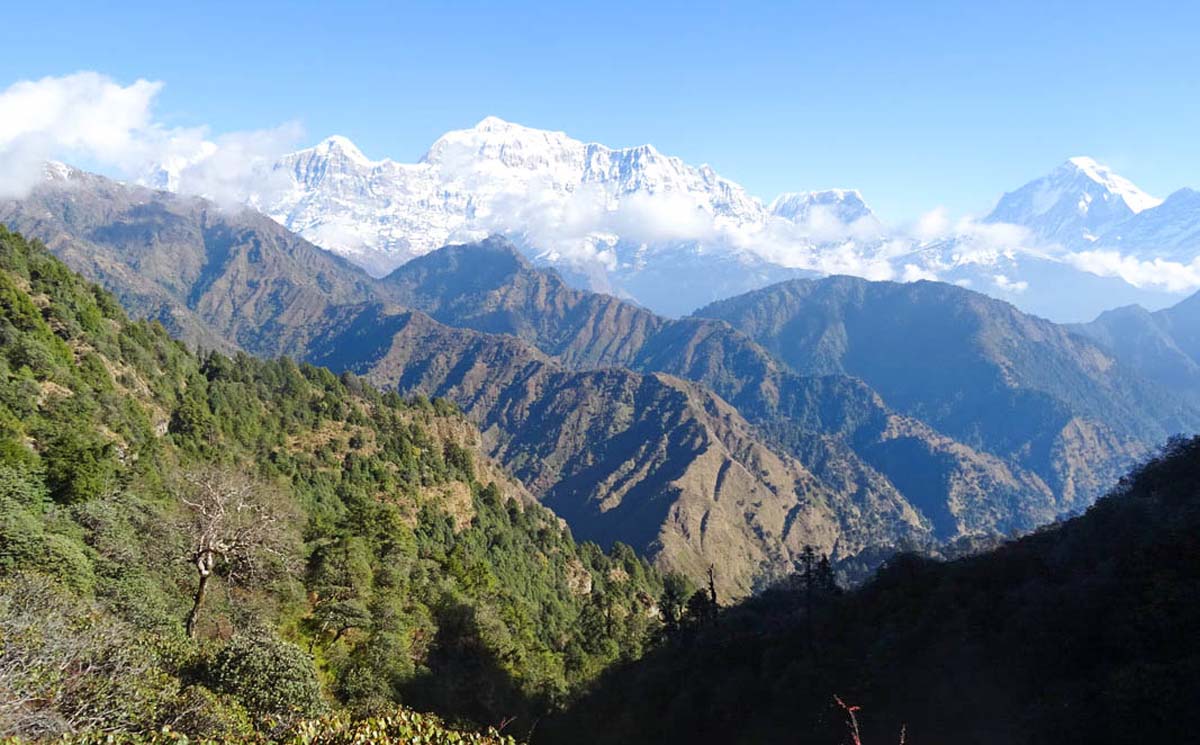 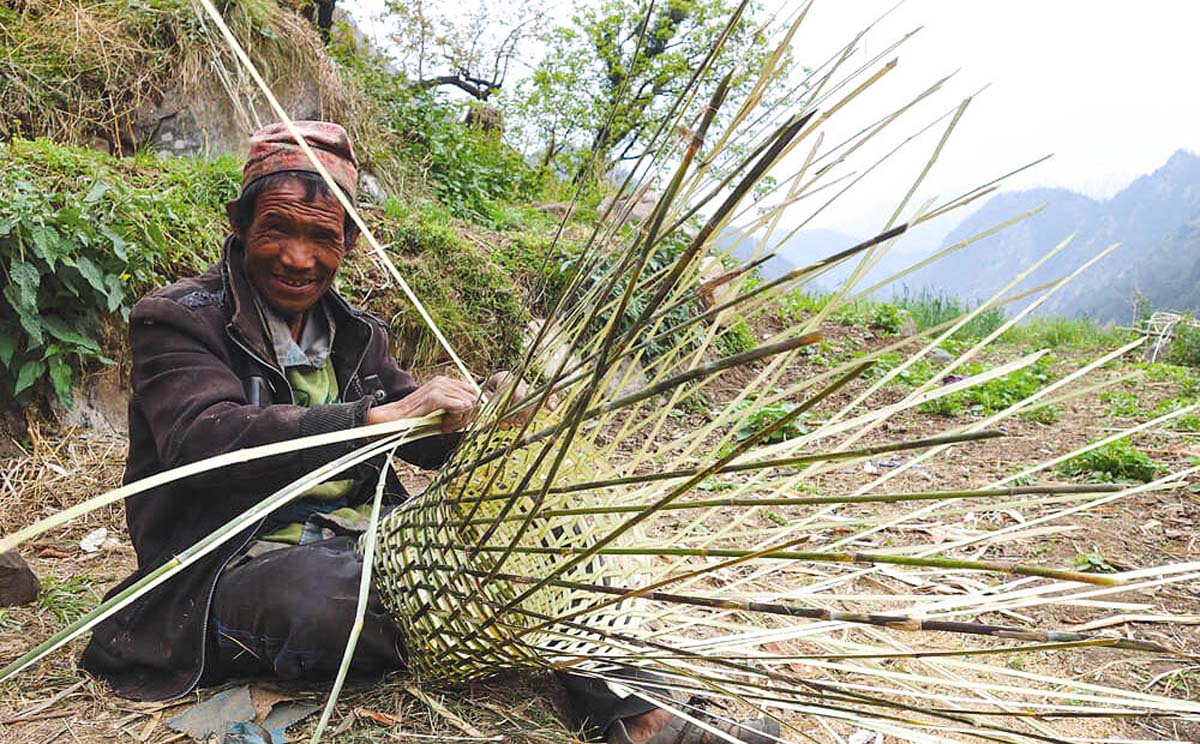 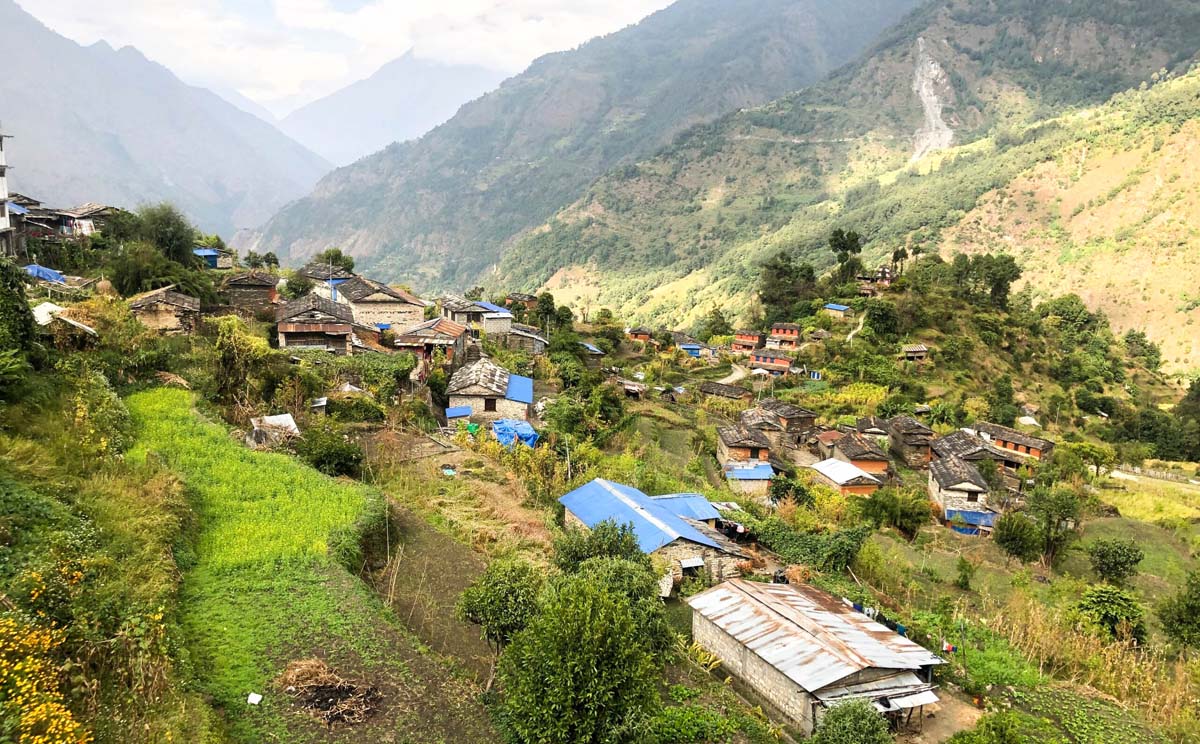 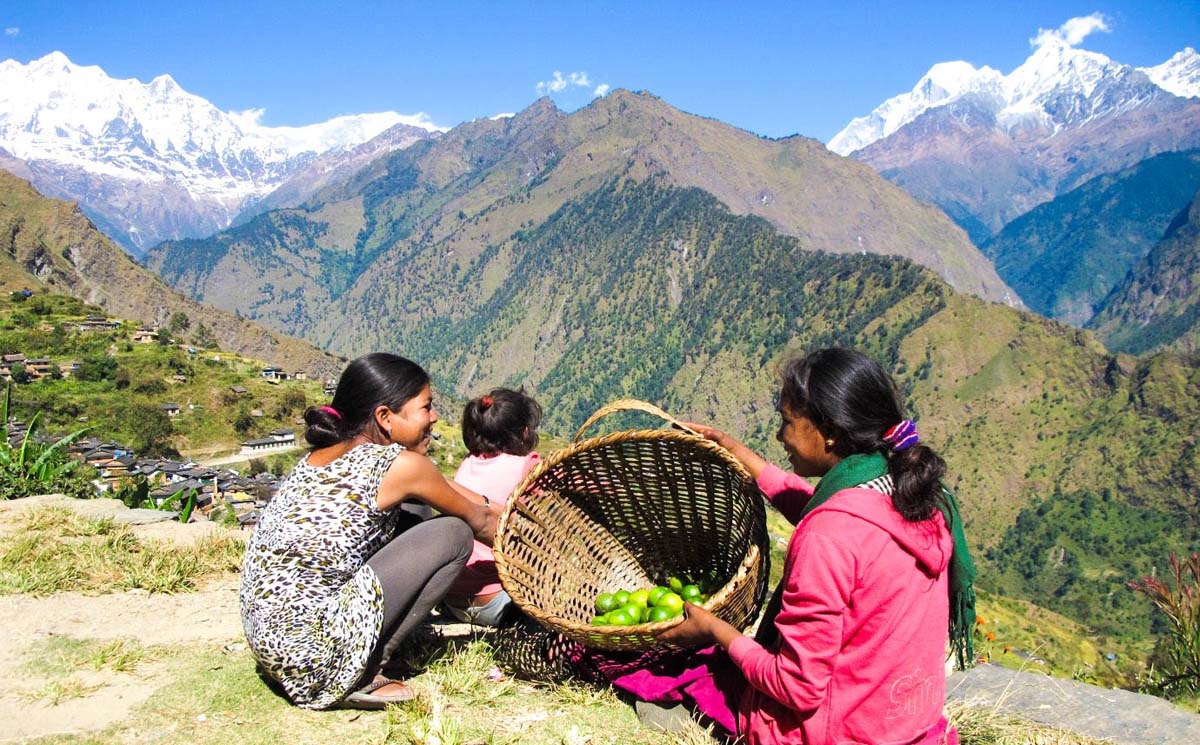 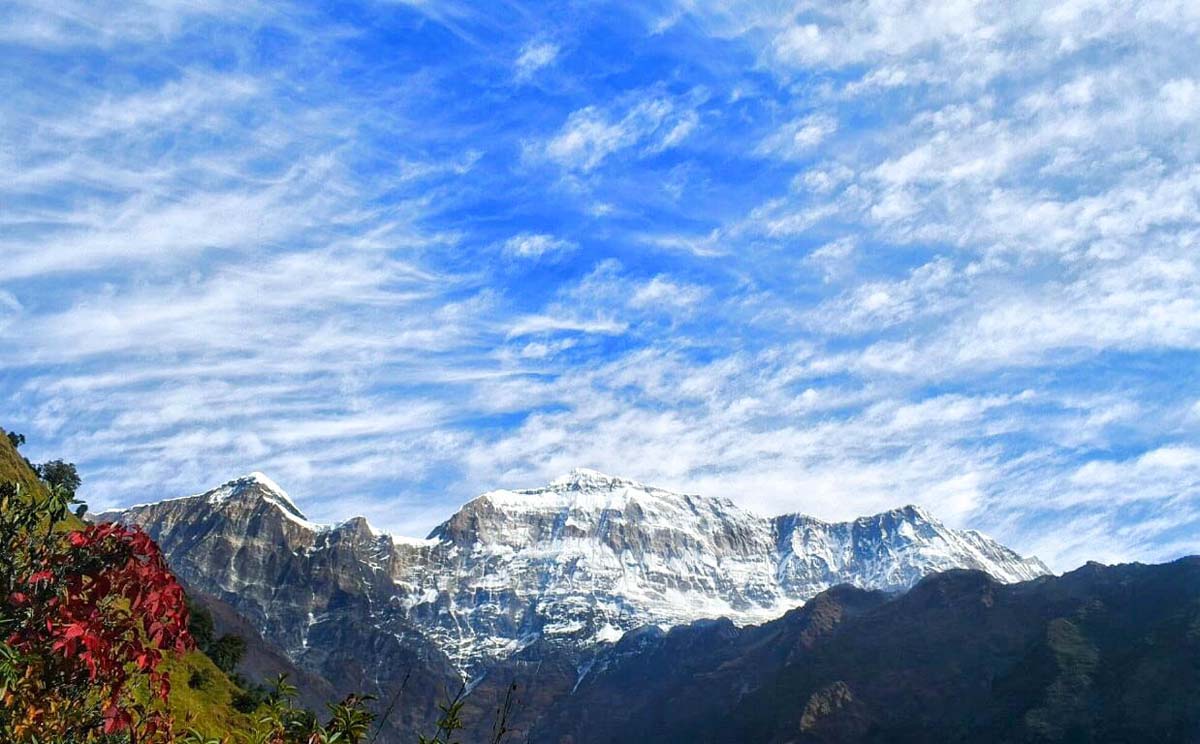 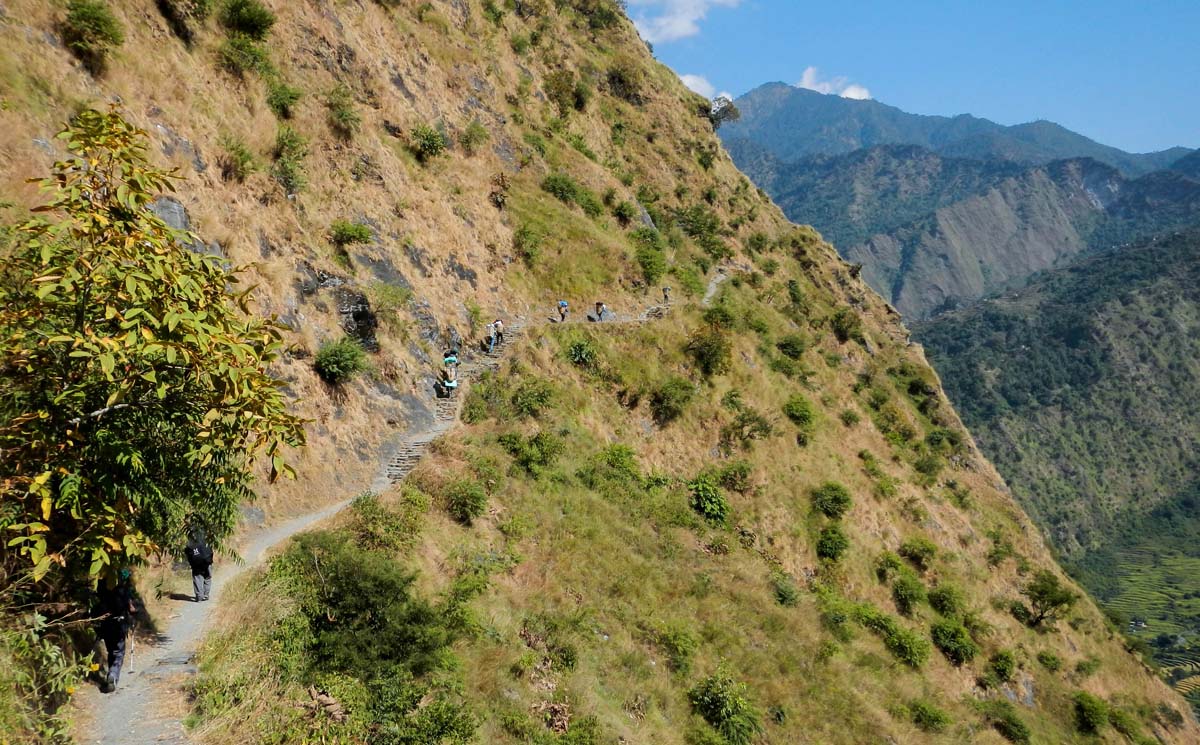 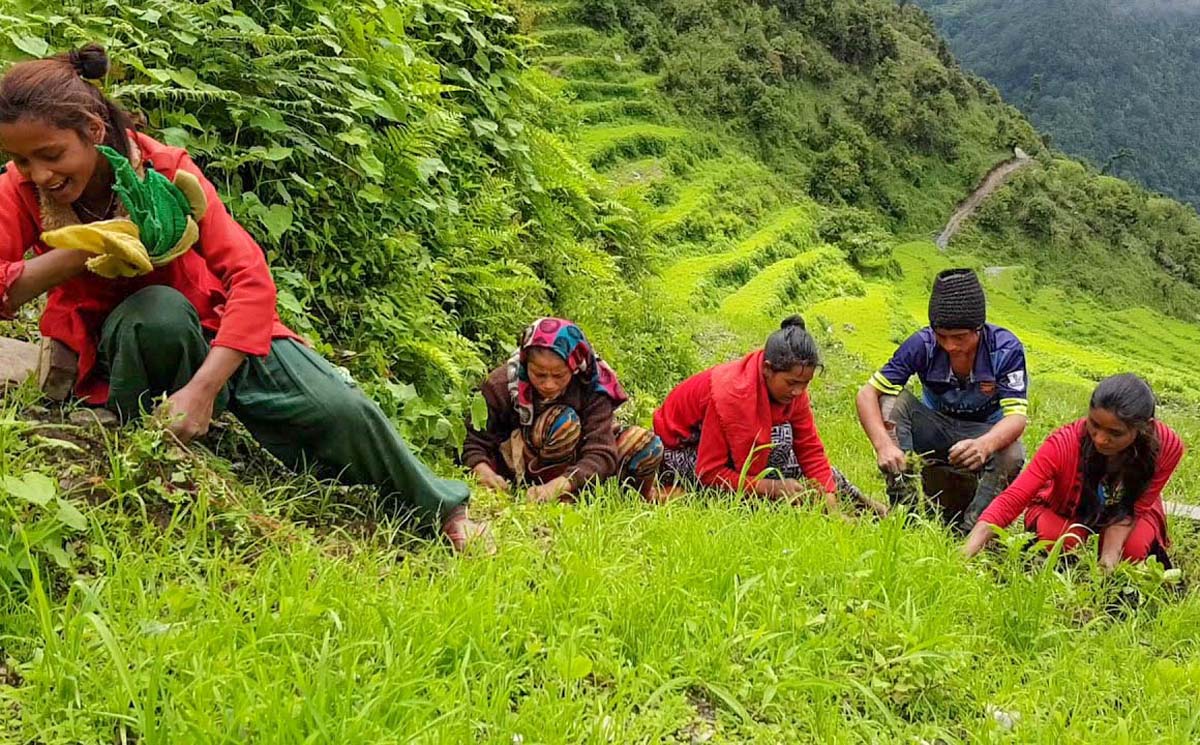 Gurja Khani Trek is recently discovered that lies in the Dhaulagiri region of central-western Nepal. The hidden village, Gurja Khani lies on the lap of Gurja Himal at the height of 2,650 meters from sea level between the south face of Gurja Himal and the Gurja Pass. In Nepali there is an old saying “Tuppi Mathi Thau Chaina, Gurja mathi Gauw Chaina” which literary means ‘there is no place above the cap; there is no village above the Gurja’. Thus it is considered the highest village in the Dhaulagiri Region. This trek offers you to explore the traditional villages, incredible scenery of Mighty Dhaulagiri, Gurja Himal, and Annapurna range.

The name Gurja Khani is derived from the name of the ‘Gurja Peak’ and ‘Khani’ means mining in the Nepali language. This village was formed during copper mining when the Chantyal and the Bishwakarma people move there as miners and processors respectively. Although the mining was closed long ago the ruin tunnels are still there. Gurja Himal Trek is one of the best homestay treks in western Nepal. As mentioned in the Himalayan Wander Walker’s Corporate Social Responsibility, we strongly suggest all our guests do the homestay trek in this area. So, the local host can directly benefit from the travelers. For those who are willing to visit this hidden gem but not physically fit enough to trek for hours long then, we organize a camping trek with additional days to itinerary given below.

This trip starts from Kathmandu and driving to Dharapani via Pokhara and Beni with a total distance of 325 kilometers approximately. From Dharapani trek begins to Gurja Khani by spending a night at Lulang village. The toughest day will when you trek from Lulang to Gurja village that takes 8-9 hours walking. After your hard climb, you will have an extra day to explore the village. This will provide you a glimpse of rural Nepal and lives in the mountain. On your day four trek, you will retrace to Lulang and then to Darbang. During your last day of the trek, you will stay overnight in Singa Hot spring. Finally, you will drive to Kathmandu via Beni and Pokhara.

Arrival in Kathmandu-Transfer to Hotel, Welcome assistance by Himalayan Wander Walkers' representative at the Tribhuvan International Airport and transfer to hotel, rest at the hotel, and briefing about the trip.

Today after breakfast we will start the city tour to most historical and spiritual attractions in Kathmandu. These landmarks are considered World Heritage Sites; including the historic Hanuman Dhoka Durbar Square, the sacred Hindu temple of Pashupatinath, the famous 'Monkey Temple' (Swyambhunath), and the world's largest Buddhists stupa, Bouddhanath. Briefing regarding the trek with two-way question-answer with the trip leader (The Guide).

Our trekking guide will pick you from your hotel and transfer you to the Tourist Bus station around 6:30 am and the bus will depart from Kathmandu after 7:00 am. It takes 6 -7 hours to reach Pokhara.

Overnight accommodation with a BB Plan is arranged.

Today you will have breakfast at your hotel and drive to Dharapani into the Kali Gandaki Valley and up the tributary Myagdi Khola valley as far as Darbang situated at an altitude of approximately 1100 meters. Drive further to Dharapani where the first camp of the trip is set.

As normal trekking days, you will start your trek after breakfast. The trail passes through woodland interspersed with terraced fields, where you will see villagers busy with different tasks depending on the agricultural season – ploughing, planting, harvesting, or threshing. In about an hour you arrive at the even more picturesque village of Takam – slate roofs, and stone-walled house. Continuing, follow the jeep track as it climbs to negotiate a landslide-prone cliff section and winds around to reach Sibang (1790 m) in 30 minutes. The jeep track ends here. After 3 hours walk takes you to Lulang village (2410 m) via Phalegaon. Phaegaon the path descends gently (passing below the village of Muna) to reach a bridge across the Dar Khola (a tributary of the Myagdi) in less than an hour.

Today you will start your trek earlier than normal days because this day will be the longest one. Track any footpath up through Lulang to reach the main trail which emerges from the village on the upper left side as you look uphill. The path has been repaired and the landslide opened up views of Gurja Himal which can be enjoyed much of the way down. On the halfway, you will reach the Gurja pass and descent to Gurja Khani. The path arrives at a flattish grassy meadow. There are a water tap and an empty building on the right, with the sheer face of Gurja Himal partially visible above this. The village of Gurja Khani is also visible to the left and is reached on a level footpath about 15 minutes from here. Near the village, avoid the path which forks right and rises up to the school.

Rest and side trek to Gurja Himal Base Camp

Gurja Khani is a pleasant place to spend a few nights. The villagers have built a community bathhouse with hot showers heated by green hydropower. Things to do include pony riding walks (flora & fauna; temples; village crafts; mining tunnels), and day-hike to the foot of Gurja Himal.

Retrace back to Lulang village (2450m)

Today you will return to Lulang village via Gurja Pass.

Retrace to Darbang via the route to Lulang. Most trekkers reach Darbang in one day, and fast walkers can make it to Beni or even Pokhara for the night. But you will walk to Darbang and drive to Singa Tatopani.

Stay overnight at the lodge.

Drive to Pokhara and Sightseeing around

After breakfast, you will be driving toward Pokhara via Beni for about 4 hours. Along the way, we can some amazing views of the Mountains shining brightly on a clear sunny day. We can even add some sightseeing tours in Pokhara in the evening time. We can also relax by boating for one hour in the famous Phewa Lake. Overnight stay in Pokhara

After breakfast, you will return back to Kathmandu which is of 6/7 hours drive. You have the option to extend your trip to continue onto Chitwan jungle safari, rafting adventure, Kathmandu valley shopping tour, and scenic Everest flight, mountain biking, and other activities.

Airport Arrivals and departure transport by car (We will collect you from the Kathmandu international airport) and transfer to Hotel.

3 nights’ accommodation (2 persons per room) in Kathmandu and 2 Nights in Pokhara with breakfast.

All required permits for Dhorpatan.

Guiding, Food, and LodgingTrekking in Nepal, all trekking supplies - Teahouse trekking means staying and eating in local lodges. We stay in single rooms where possible, but often you will have to share. The rooms are basic, normally just a bed with a pillow, blankets. A few have electric lights and all have a spacious dining room-lounge. We eat at teahouses and, although the food is usually plentiful and delicious, the menu is not extensive. They offer a variety of potatoes, rice and noodle dishes, as well as soup and seasonal vegetables. Beers and local spirits are often available, but that will be at your own cost. A variety of cereals, bread, and egg dishes are generally available for breakfast. There are also snacks available such as basic biscuits, chocolate, and soft drinks and in some areas, you will find fresh fruit in season. It is normal to meet your porter in the teahouse where you will stay overnight. So, pack your necessary things in your own day pack.

Dhaulagiri Circuit Trek lies between the Dolpo and Mustang Region of Nepal. This trek makes a clockwise round to Mount Dhaulagiri (8,167 meters), the seventh highest mountain in the world. Since 1950 AD this area was opened for trekking and first discovered by the team of French Expedition. During...