Activity Per Day
4-5 hours per day

Three days Kathmandu city tour is a family and friend group tour which is child friendly. Heritage sites are the attraction that includes both natural and artificial monuments, listed by UNESCO as an endangered property of the world. The heritage sites have their own unique features and value which differentiate from other sites. Explore the unique art and architecture, culture, and tradition, unparalleled feature of the landscape of Nepal which is UNESCO listed world-famous sites. Description of the monumnets and attractions are given below. 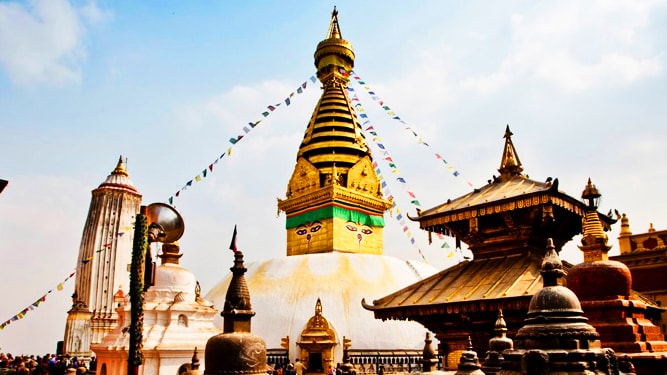 Swayambhu Stupa is the most sacred among the Buddhist pilgrimage sites in the Kathmandu valley. The monument is listed under the UNESCO world heritage sites. The myth of Swayambhu is closely related to the origin of Kathmandu valley and it is also the oldest religious site in the valleys. Swayambhu stupa is famous among the Newari Buddhist but the sites are center for all the Buddhist and Hindu people of the valley. There is a long stair from the eastern side of the stupa which is said to be 365 steps and was built by King Pratap Malla who was the famous king of Kathmandu. You will have a spectacular view of Kathmandu valley from the hilltop of Swayambhu stupa.

Kathmandu Durbar Square holds the same popularity as another durbar square of the valley. The main monument inside the peripheral is the Kumari Ghar (House of Living Goddess), Durbar square and it’s courtyards, Basantapur tower, Taleju temple, and other different temples’ constructions in its surroundings. The white part of the durbar square was the conference hall and was built with European style during the Rana regime. The northern side of the durbar square is a busy street of the local vendor and street markets. The alley leads you towards the old and typical market junction of Indra Chowk and the Asan Tol. 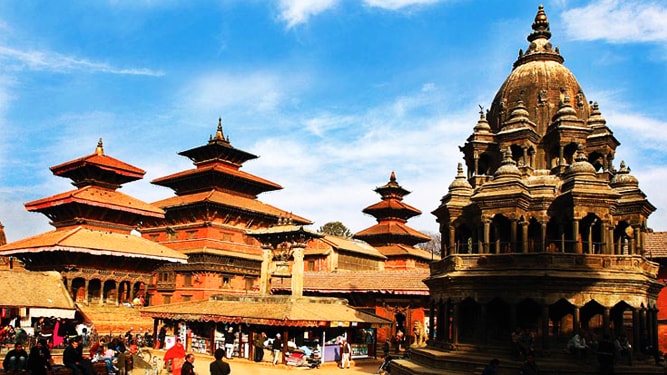 The Kathmandu valley consists of three main cities Kathmandu, Patan, and Bhaktapur. Before the unification of the greater Nepal done by King Prithvi Narayan Shah in the 18th century, these three cities were independently ruled as a separate kingdom. These old cities of Kathmandu Valley have Durbar Square (Royal Palace) to each.

Among them, Patan Durbar Square exhibits the fine wood and metal art and craft on the struts, windows, and the doors of the palaces. There are beautiful courtyards in the palace peripheral where you will see fine art and architecture of typical Nepalese Artists. The Patan museum inside the palace is the finest and the well-managed collection of wooden and metal art where you will also observe the detailed procedure of making metal statues in the museum. The palace frontier is filled with different styles of temples structures. Due to the fine art and architecture which fills the Patan city, it is also known as Lalitpur (The city of Beauty) 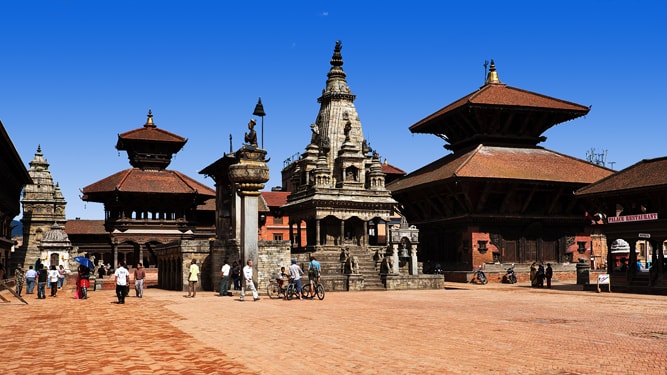 Bhaktapur Durbar square is in the city of Bhaktapur which means the city of devotees. This site is 13 km far from Kathmandu city and also the smallest district in the whole Nepal. Bhaktapur Durbar square is famous for its magnificent Golden gate which displays the masterpiece of metal art existing from the 18th century. The Durbar square also portrays the 55 windows palace which is the example of fine Nepalese wooden art craft. The frontier peripheral of Durbar square has various structural temples and a resting spot for the local people. You will also visit the museum of stone sculpture and the collection paper painting in the same building of the palace. You will also visit the alley of the old cities where you will find interesting shops and the local lifestyles of the people. The pottery making activities and farmer drying cereals in the sun will exhibit the 12th-century activities of the cities. Other famous sites in Bhaktapur are the Five-story temple, Dattatreya temple, and the Peacock window. 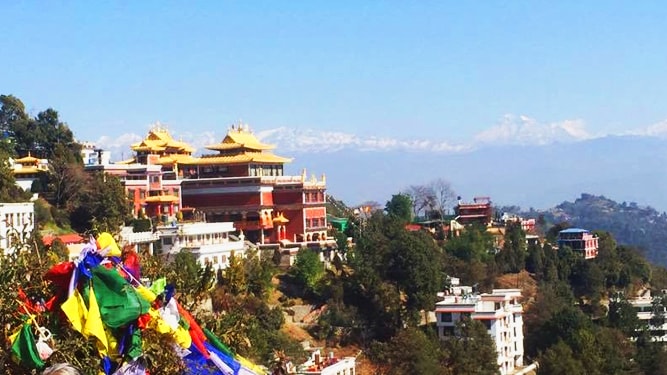 Namo Buddha pilgrimage sites are popular among Buddhist followers from different corners of the world. It is located 40km away from Kathmandu city which takes about 2hours to drive towards the eastern side. The place has the religious history of the previous life reincarnation of Lord Buddha who sacrificed his body for the mother tigress which was in a state of death because of hunger.  The place is believed to be highly spiritual where Shakyamuni Buddha achieved great compassion. Among the three most holy Buddhist stupas in the valley, Namo Buddha stupa is one of them which is constructed over the holy hair and bones of Buddha’s previous live body. This site is equally popular with its calm and peaceful environment which is isolated from the crowded city of Kathmandu valley. People visit these sites for many purposes, some visit for religious purposes, and some for the recreational. This place is also famous for the meditation retreat center for foreigners. 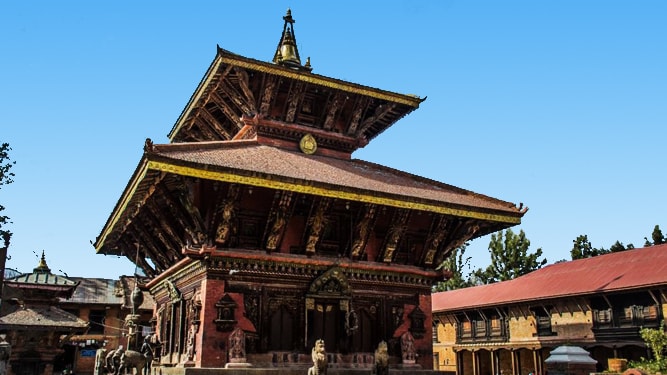 The ancient temple situated on the hilltop of Change or Dolagiri which is located 12 km east of Kathmandu and few miles north from Bhaktapur. Changu Narayan temple is considered to be the oldest structure in the history of Nepal. The Kashmir king gave his daughter married to the Bhaktapur king and the temple was named after her. This heritage site is located on a very calm and peaceful hilltop from where you will witness the spectacular view of surrounding cities of the valleys and the breathtaking view of the great Himalayas. While visiting these sites you need to walk up for ten minutes from the vehicle stop. On a way to the temple, you will see different art and crafts shops and workshops exhibitions. Then the temples’ peripheral is filled with ancient statues of Hindu God and Goddesses, temples and chariot for the festival which is laid on the corner of the courtyard. The main temple is built with two-level roofs dedicated to the Lord Vishnu. There are two ancient stone pillars, the inscription written in Sanskrit is the oldest structures of Nepal which date back to 464 AD by Lichchhavi king Mandev. The sites are the example of many fine stones art and the center of religious belief. 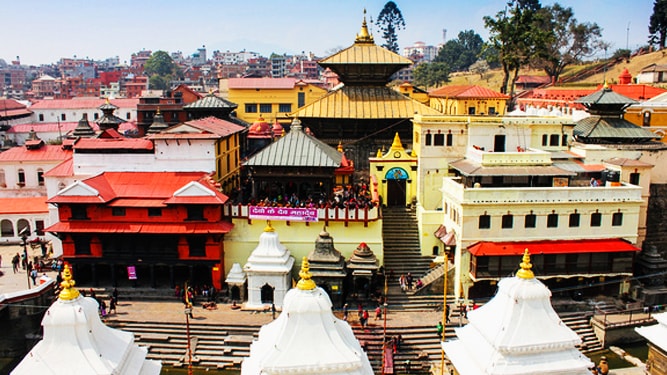 Pashupatinath temple is the holiest Hindu temple in the whole Nepal where devotees far from India and other Hindu people come to visit this holy sites. Pashupati means the Lord of the beast and people believe that if once in a lifetime they visit the temple, in their next life they don’t need to rebirth as a beast or animal. The temple is dedicated to Lord Shiva and the main sanctum of the temple is decorated with the Shiva Lingam. Non-Hindu people are not allowed to enter the main temple and only could peep from the outside. But one can visit the whole temple peripheral from the viewpoint which lies opposite of the temple across the river.

The temple is situated near the holy river of Bagmati and the cremation activities are done aside from the holy river by the Hindu people. You will see a series of white temples across the river to the opposite side of the main temple. These stone-made temple are the shelter for the Sadus who are the followers of Lord Shiva. While visiting the holy sites, at the same time you will see the ritual activities done by the family priest which is done for their passed away family members. You will see both the culture and art in these holy sites of Pashupatinath temple.

Boudha stupa is the largest stupa in Nepal and somehow in the whole world. The stupa is decorated with golden polish on the harmika and the white dome constructed on the mandala shape of the base and small mani wheel surround it. The stupa is the center of the Buddhist followers but non-Buddhist also worship these sites because in Nepal people respect each other religion. You will see people from the Himalayas of Nepal and the Tibetan people making circumambulate to the huge stupa.

The stupa area is very congested but you will find a neat and calm environment inside the main gate of the stupa. There are many shops of Thanka paintings, statues, prayer beads around the stupa. A rooftop cafe which offers a wonderful view of the stupa and the monasteries where you will see the ritual activities done by the Tibetans Buddhist lama. The big statues of Buddha and other Bodhisattva have magnificently decorated the main chapel of the monastery. The ambiance of the Boudha stupa will really give you a positive vibrant to your spirituality.

All land transportations as mentioned in the itinerary

Other expenses not included in include section

Booking must be done atleast before 3 days of your arrival. Please let us know your other information regarding this trip. This is the right tour, you can amend it as per your requirement and interest. We do all kinds of reservations and bookings related to Flights, vehicles, and hotels. We would love to hear from you to serve a rewarding trip.

The most important consideration for any tour is staying warm and dry, lightweight, breathable, moisture-winking under layers are highly recommended. Insulating layers and jackets are necessary.

Bandipur, an untouched Newari settlement beautifully preserved town, 143 kilometers away from the capital city of Nepal lies midway between Kathmandu and Pokhara in the Tanahun district of western Nepal. Your visit to Bandipur will leave you speechless, the sacred cave, temple, shrines,...