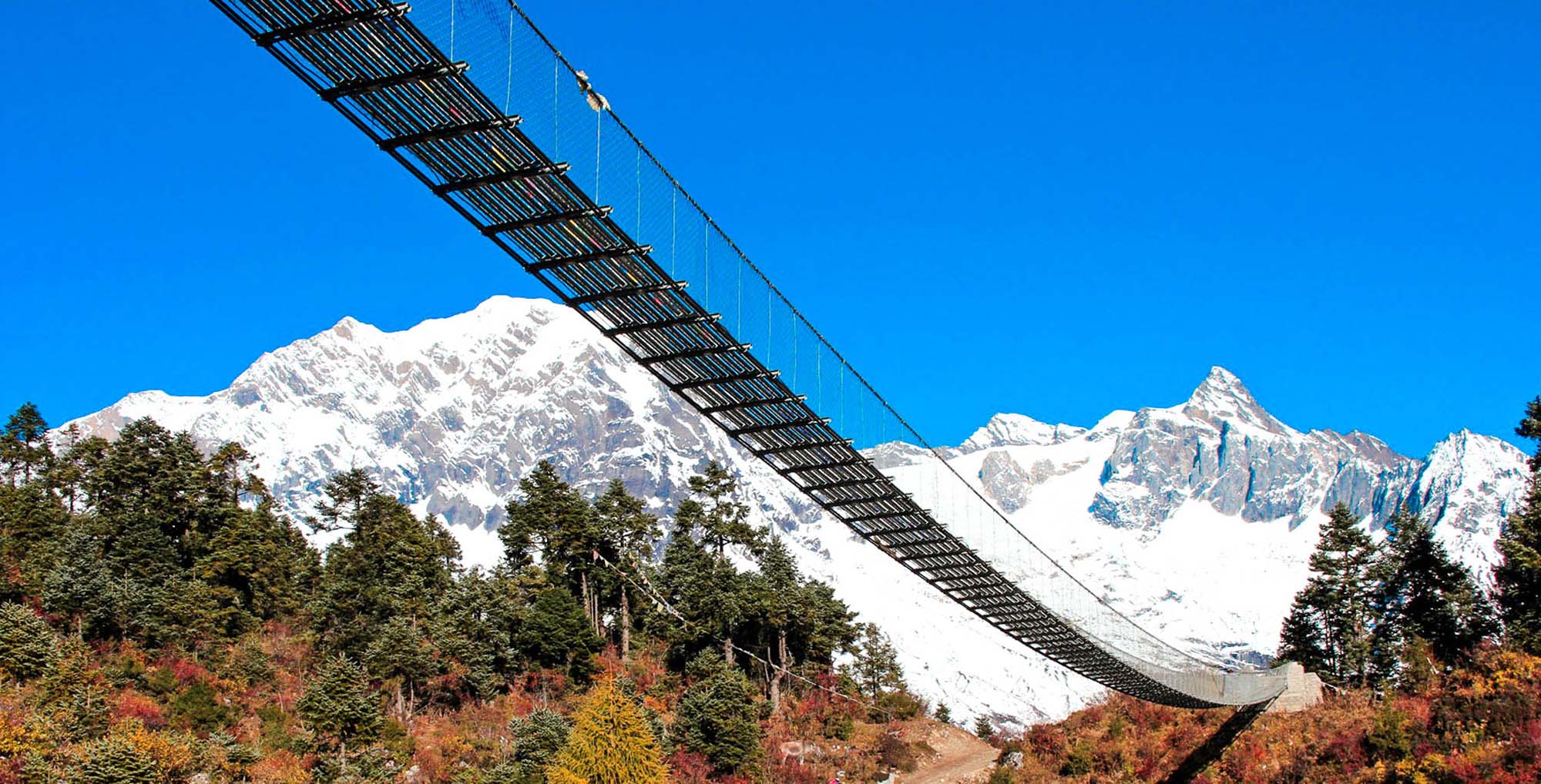 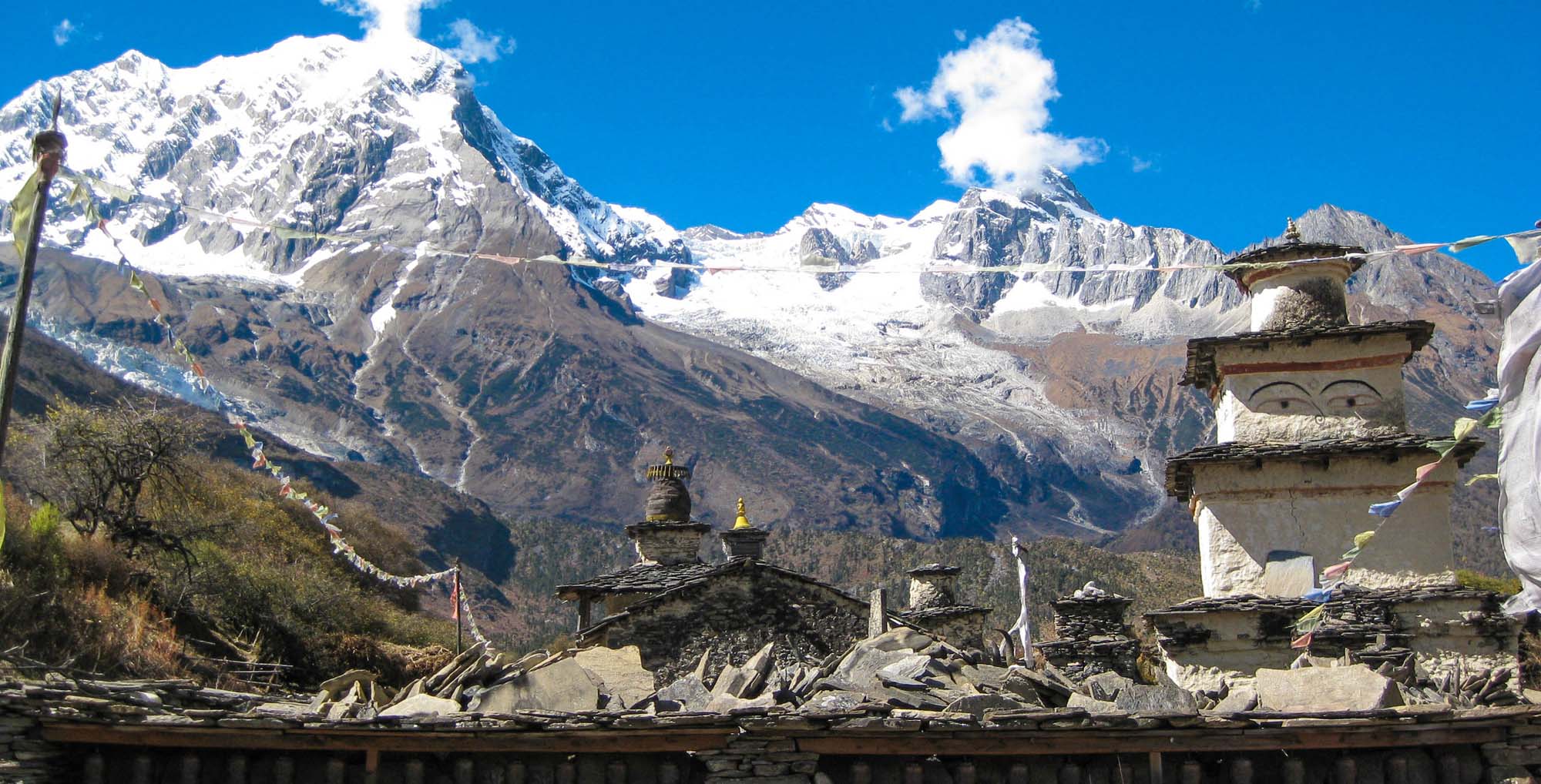 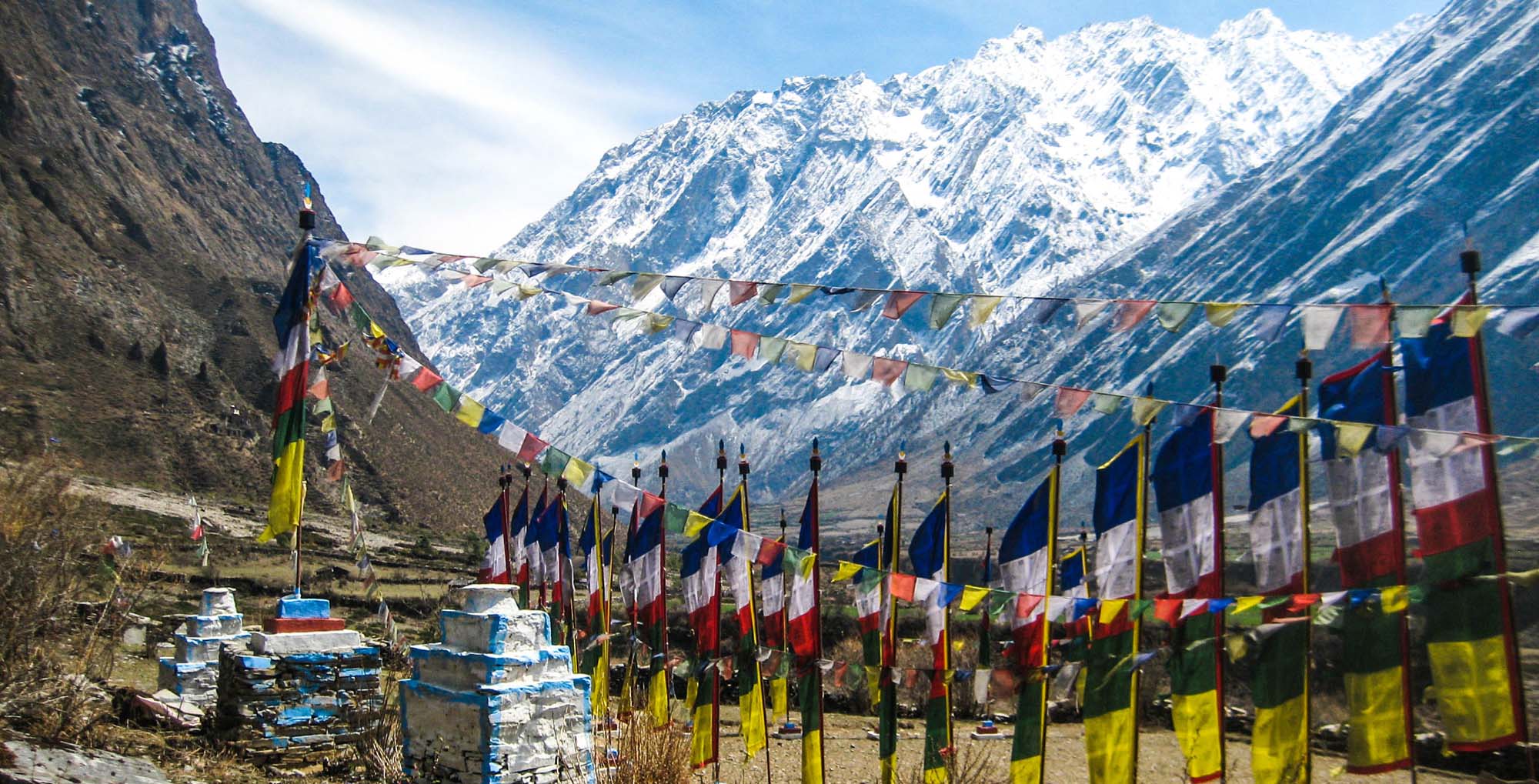 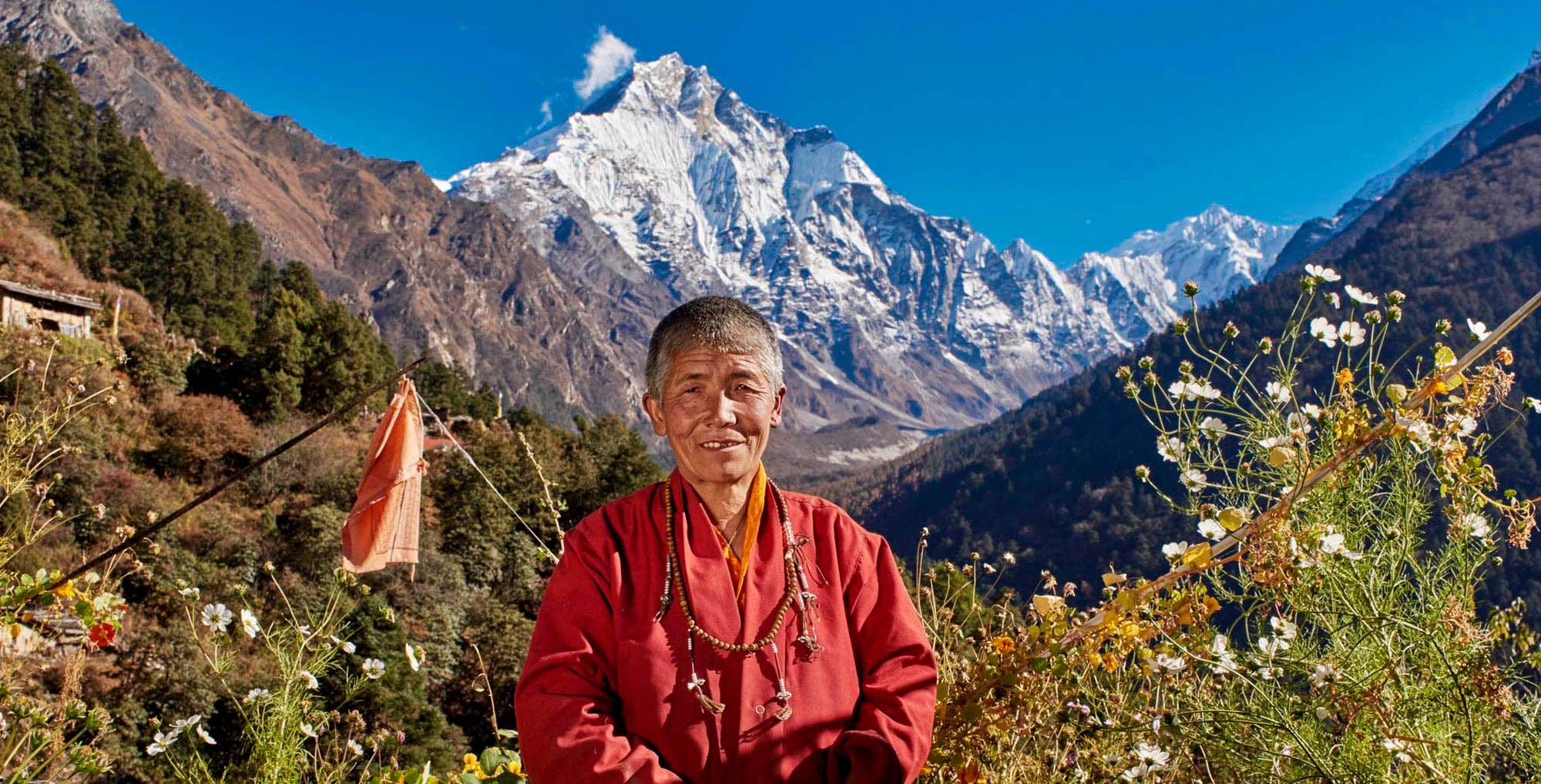 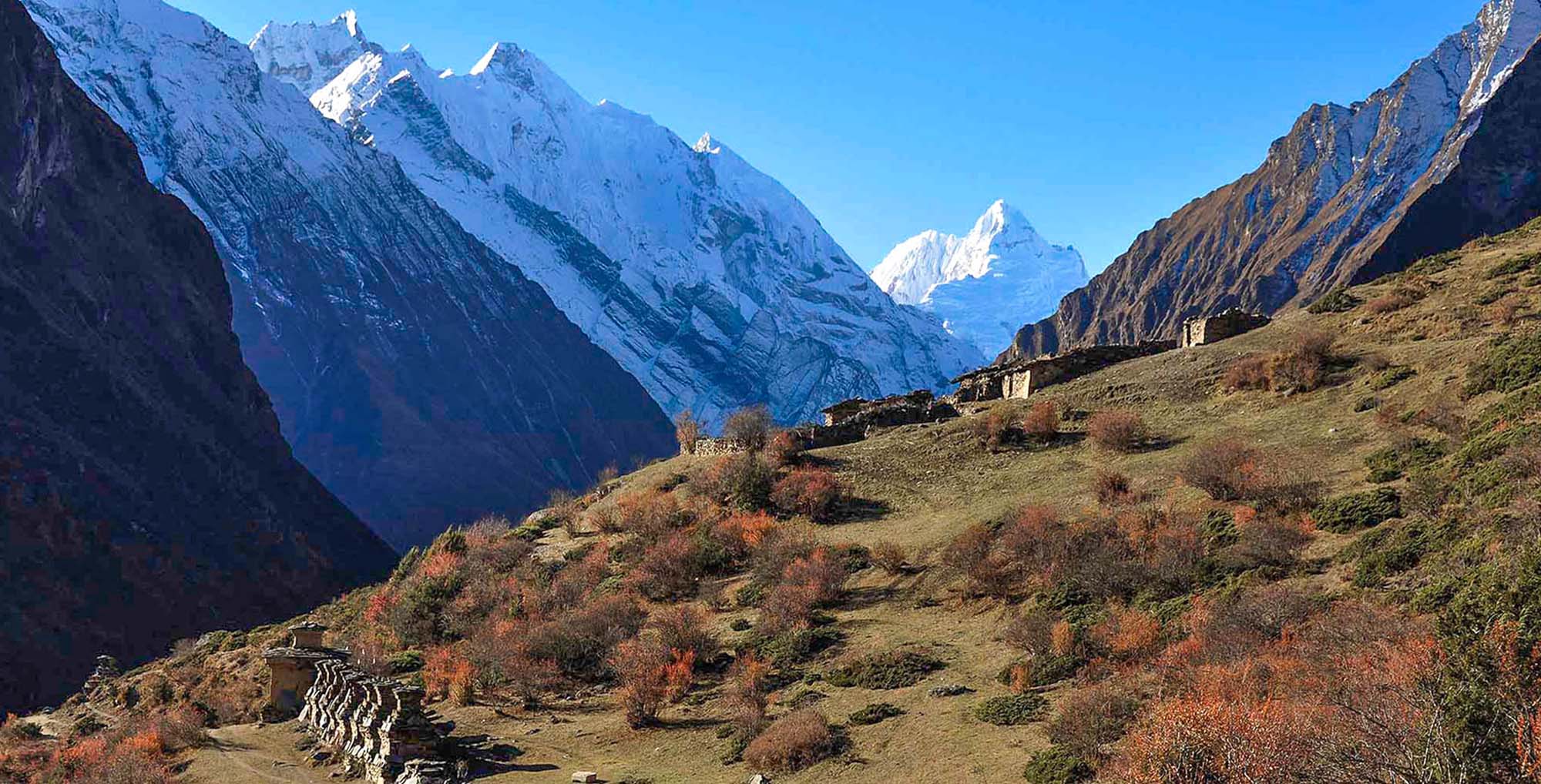 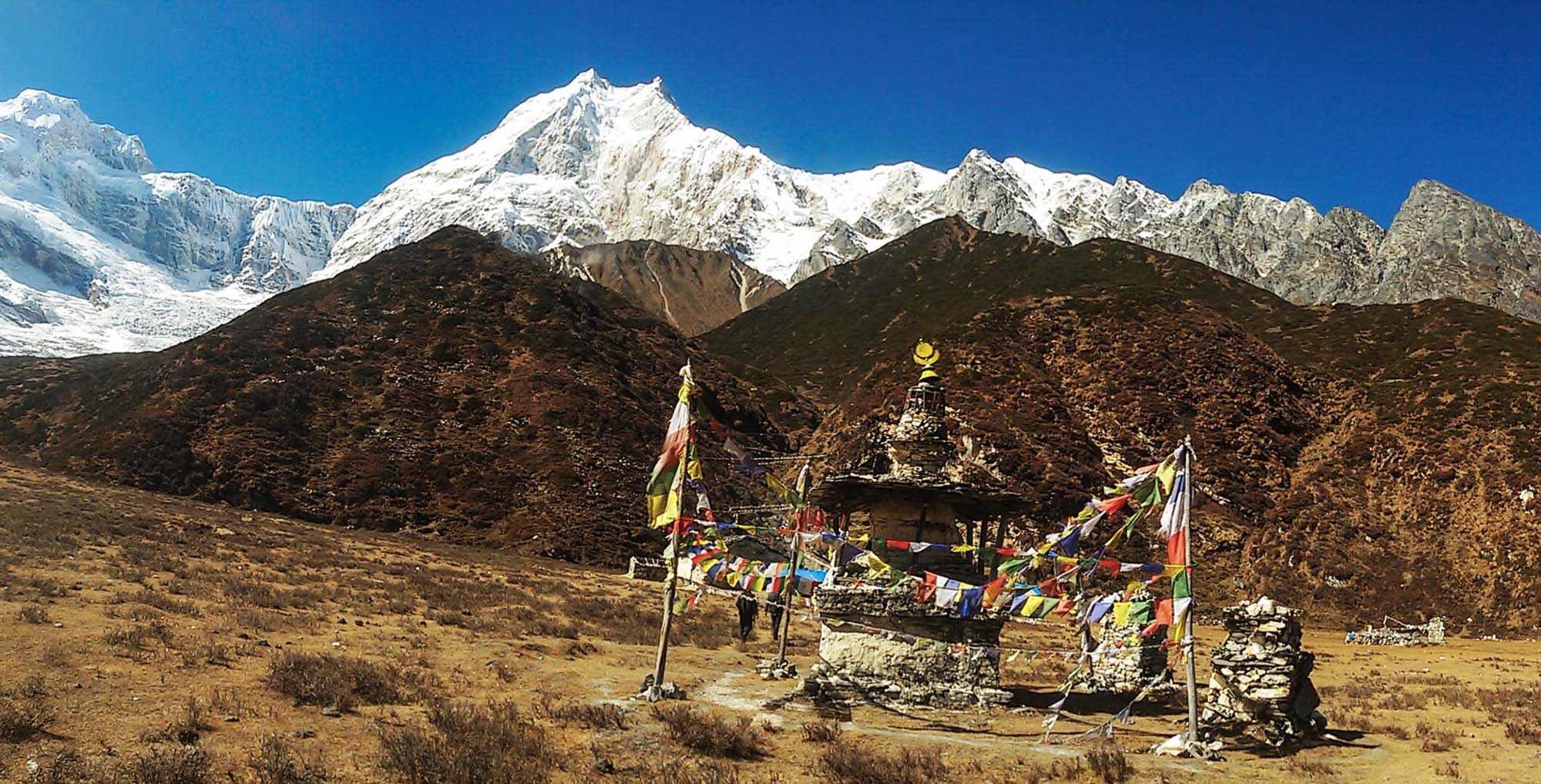 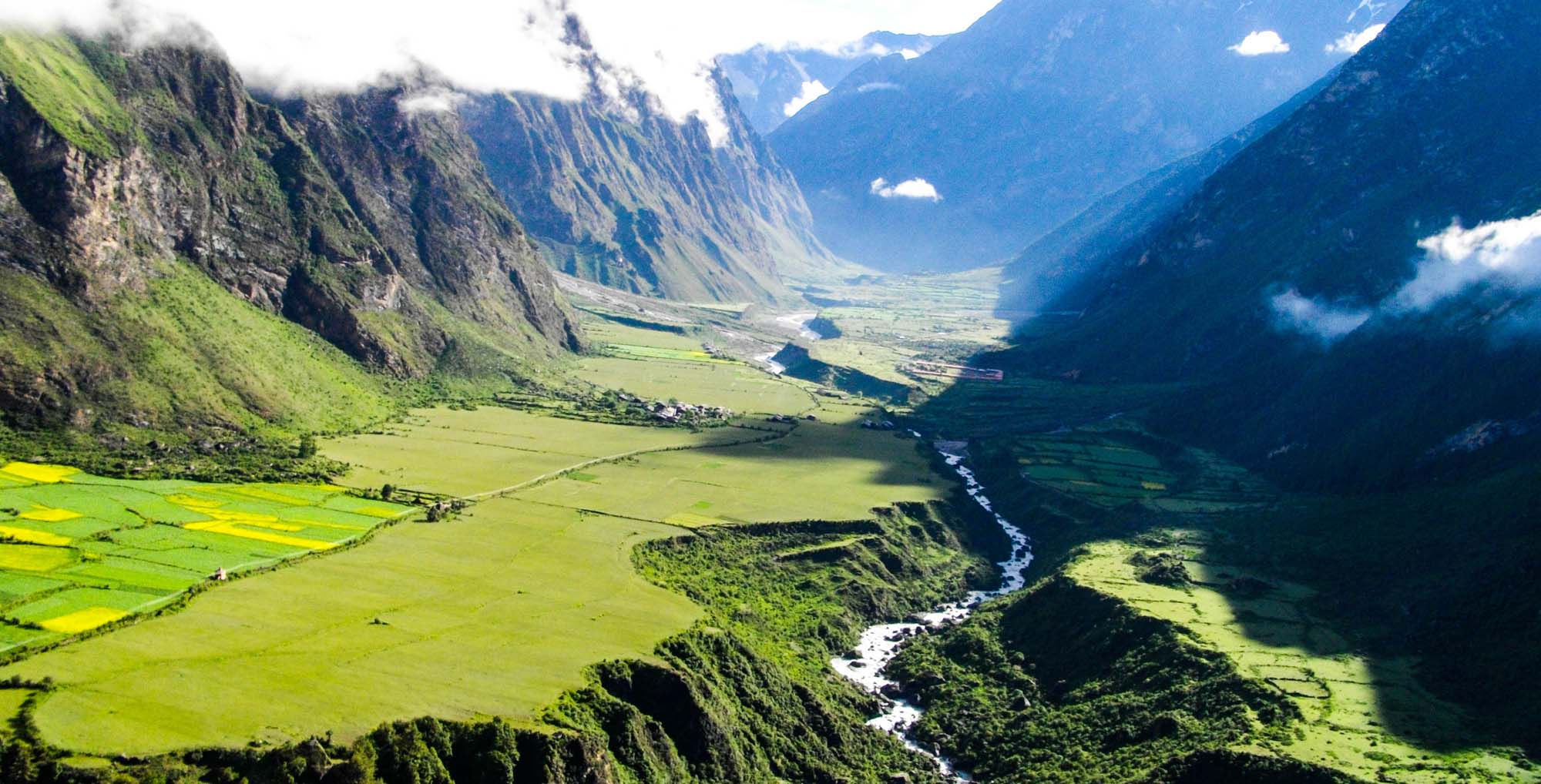 Tsum Valley Trek is a hidden treasure of  Gorkha district of Nepal, situated in the northern Gorkha between the majestic scenery of the Boudha Himal and Himal Chuli to the west, Ganesh Himal to the south, and Sringi Himal to the North with the elevation varies from 1905m in Lhokpa to over 5093m at Ngala Dhojhyang pass on the Tibetian border. The Tsum valley was restricted until the year 2007. Local people are known as Tsumpa and they have their own unique culture, tradition, & dialect mostly related to the Tibetan language. The Tsum valley comprises many religious monasteries such as Dhephyudonma Gompa, Rachen Gompa, and Mu Gompa.  In summer they celebrate festivals like Dhacyhang (Archery), Saka Dawa (literally it is the fourth month of the Tibetan calendar, a month Honoring the Buddha’s Life), and Fanning (Picnic). The fascinating landscapes of this wonderful valley will make the imaginations of trekkers beyond expectations.

The trials are decorated with artistic Chortens and lined with Mani walls made of thousands of stone slabs carved with drawings of deities and inscribed with prayers. The circuit traverses across Tsum Valley, the Manaslu area in Nepal, and the southern parts of Tibet. The Buddhist saint Milarepa and Guru Rinpoche are believed to have meditated in the caves of these mountains due to their remoteness and inaccessibility. Even though this area is remote but the landscape is amazing.

Tsum valley has a long history of Buddhism. The famous KyimoLung, a pilgrimage circuit in the central Trans-Himalaya, is well known for its centers of learning and meditation. This sacred valley and its people have been bypassed through mainstream development for centuries where still we can visit some Buddhism pilgrimages sites.

Himalayan wander walkers had organized this trek many times and send a guide who speaks both English and Tibetan fluently. This trek begins from Arughat in the Gorkha district, which is easily accessible from Kathmandu. We also offer a Manaslu circuit trek with Tsum valley. Furthermore, please don’t hesitate to contact us.

“Explore the secret Tibetan Buddhist isolated Himalayan Valley through the off-beaten route which provides spectacular views of the majestic mountains and cultural bliss of Tsumpa people.”

Upon your arrival at the Tribhuvan International Airport in Kathmandu, you will be welcomed by a representative of the Himalayan Wander Walkers. You will be checked into your hotel. You will meet our trekking operator for briefing about the entire trek on this day. You have to come one day earlier for the Special permit. For that, we need to show your original Passport in the Immigration office. You can either rest or hang out around a famous tourist area in Kathmandu, Thamel. Overnight: at the hotel set with BB plan.

Today after breakfast we will start the city tour to most historical and spiritual attractions in Kathmandu. These landmarks are considered World Heritage Sites; including the historic Hanuman Dhoka Durbar Square, the sacred Hindu temple of Pashupatinath, the famous 'Monkey Temple' (Swyambhunath) and the world largest Buddhists stupa, Bouddhanath. Briefing regarding the trek with two-way question-answer with the trip leader (The Guide). Overnight: at the hotel set with BB plan.

Early morning our guide will pick you up from your hotel and escort you to the bus station. The bus drive to Machakhola takes about 8-9 hours. The bus will stop in different places for a toilet break, breakfast, and lunch. Coupole of year back all trekkers start their trek to Tsum Valley or Manaslu from Soti Khola. But now the driveable road had reached Machakhola. We take a drive from Kathmandu to Dhading Besi on a nice, paved road enjoying the views of the hilly areas, terraces, and fields. The road continues to lead to Arughat. From Arughat the off-road follows the Budhi Gandaki River that finally drops you to Machakhola.
Overnight: at teahouse. Meal: three times a day.

The next day, From Machhakhola we follow a narrow trail that takes us to Tharo Khola and finally to Khorlabesi. After a few ascends and descends, we reach a popular hot-spring, Tatopani. We will spend some time here and can enjoy the natural sauna in the hot -spring and relieve all our tiredness and stress of the trek. We climb another ridge and cross the Budhi Gandaki on another suspension bridge. After this, we climb a staircase and then cross a landslide and a ridge to reach Doban.  After crossing a suspension bridge, we again climb the stone staircase then go down to the river and climb some stairs again to reach Thado Bharyang. Then we cross the west bank of Budhi Gandaki, climb over a ridge, walk along the river to reach the village of Jagat.
Overnight: at teahouse. Meal: three times a day.

On this day, we first reach Salleri after climbing a rocky ridge and then go towards Sirdibas.  We continue to Ghatta Khola and then walk upstream through a long suspension bridge to reach a Gurung village in Phillim.  We take the trail up through Philim and we will pass by Ekle Bhatti where the trail separates between Tsum and Manaslu. As we trek, we will notice the welcome board, so we head towards Lokpa. On the way, we will see a few villages and rivers. The rivers begin to narrow down as we meet the convergence of the Syar River from the Tsum valley. Taking a right turn, the trail takes us forward, eventually reaching the Lokpa village.
Overnight: at teahouse. Meal: three times a day.

Before heading to Lokpa, we will register our permits of Manaslu and Tsum valley at the entry checkpoint. Climbing a ridge over Sallery, we will walk along the river bank crossing the Budhi Gandaki river via a long wide suspension bridge. Continuing to trek, the valley opens up as we head towards Phillim. The trek throughout is a very pleasant one. We will pass by Ekle Bhatti where the trail separates between Tsum and Manaslu. As we trek, we will notice the welcome board, so we head towards Lokpa. On the way, we will see a few villages and rivers. The rivers begin to narrow down as we meet the convergence of the Syar river from the Tsum valley. Taking a right turn, the trail takes us forward, eventually reaching the Lokpa village. This village is the first village in the Tsum valley that gives us the opportunity to view the beautiful Manaslu range. This village is isolated and is a hidden valley of happiness blessed by Padmashamva centuries ago.
Overnight: at teahouse. Meal: three times a day.

Chhokangparo to Nile (3361m) visit Rachen Monastery on the way

Fly back to Home Country

This trek can be done in 16 days or less according to your time availability.

Transport from Kathmandu to Arughat back to Kathmandu by local bus.

Tea House/lodge accommodation during the trek.

Three-night Accommodation with breakfast in Kathmandu.

All Standard Meals (Breakfast, Lunch, and Dinner) during the Trek.

Trekkers with accompanying porters (generally, 1 porter per 2 trekkers) to assist with carrying gear during the trek. (We cover the porters’ meals, lodging, salary, transport, insurance, equipment, and other essentials.)

All Government and local taxes.

Farewell Dinner in Kathmandu before your international departure

Meals (meal and dinner) in Kathmandu

Tips for guide and porters

Guiding, Food, and Lodging
In Nepal, all trekking supplies - Teahouse trekking means staying and eating in local lodges. We stay in single rooms where possible, but often you will have to share. The rooms are basic, normally just a bed with a pillow, blankets. A few have electric lights and all have a spacious dining room-lounge. We eat at teahouses and, although the food is usually plentiful and delicious, the menu is not extensive. They offer a variety of potatoes, rice and noodle dishes, as well as soup and seasonal vegetables. Beers and local spirits are often available, but that will be at your own cost. A variety of cereals, bread, and egg dishes are generally available for breakfast. There are also snacks available such as basic biscuits, chocolate, and soft drinks and in some areas, you will find fresh fruit in season. It is normal to meet your porter in the teahouse where you will stay overnight. So, pack your necessary things in your own day pack.

DRESS CODE FOR VISITING MONASTERIES, AND TEMPLES IN NEPAL

Note regarding itineraries
Although we generally adhere to the schedule, the itinerary is subject to change for numerous reasons beyond our control, including weather and terrain conditions, suitable campsite availability, and the group's general fitness level. It is important to understand that our trek is logistically complex and it is not unusual that adjustments be made. Our guide will orient you each evening to the following day's plan; their good judgment is the key to the long history of successful treks that Himalayan Wander Walkers has led till now. Please remember that our ability to make adjustments as needed helps to ensure that your trek is successful.

“Explore the sensational view of Nubri Mountains including Mount Manaslu (8th highest mountain in the world with 8,156m), Tibetan immigrant’s culture, and experience the dramatic Larke Pass of 5,100 meters.” Manaslu Circuit Trekking, one of the best treks in Nepal...