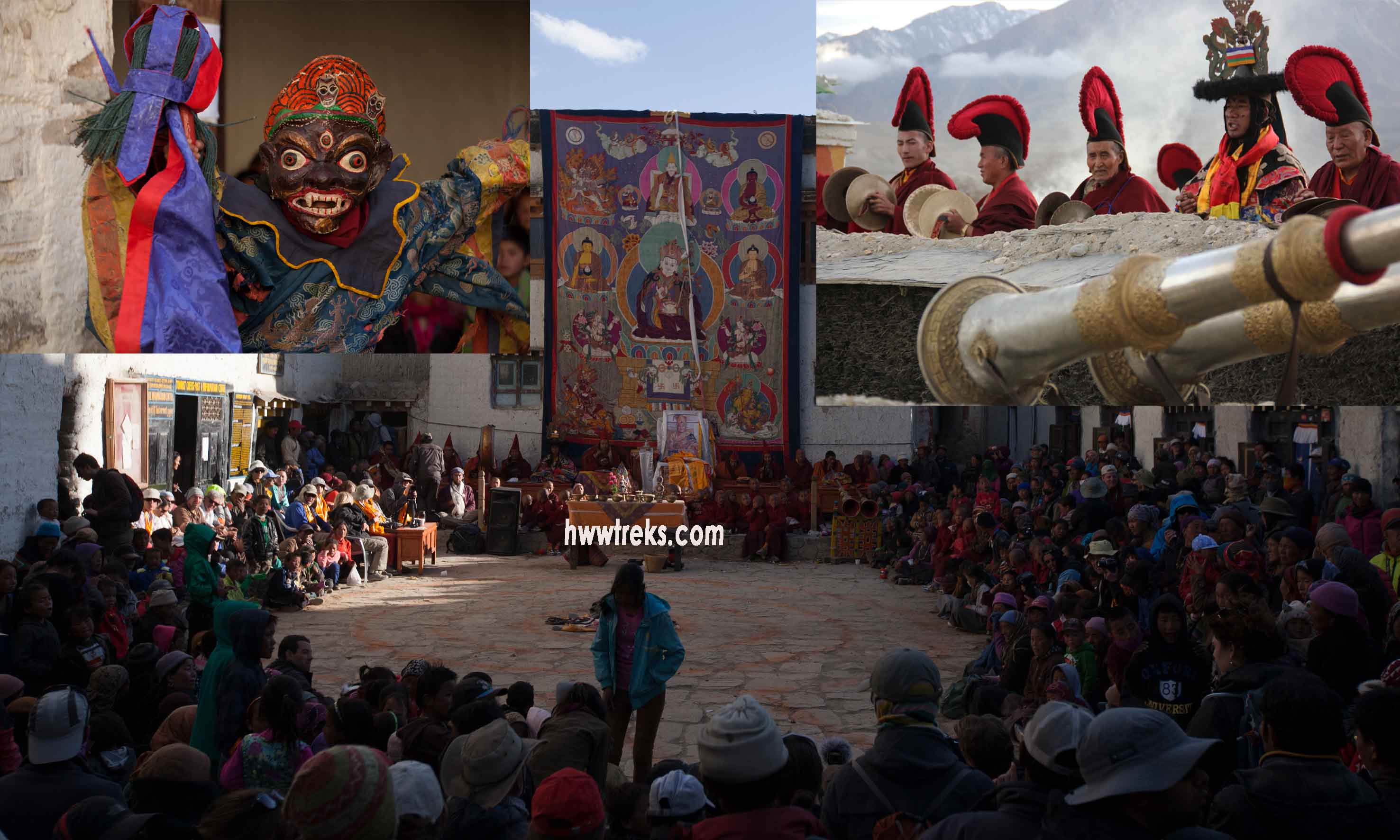 The Tiji Festival is an auspicious Buddhist religious event started by late Sakya Trizin Ngawang Kunga Sonam, a scholar who was brought by King Samdup Rabten of Lo Manthang at the end of the 17th century in order to cleanse the territory of demons. During that time the monks had been residing in Chhode Monastery and performed Vajrakila practice associated with rituals and last for three days. Vajrakila is a practice that was introduced in Nepal by Guru Rimpoche or Padmasambhava, the Tantric Master in the 8th century. Since then monks of Chhode monastery perform this religious mask dance every year. Generally Tiji festival happens between the month of April and May considering the Tibetan Lunar calendar within the capital town, Lo-Manthang. It is a three days celebration, a victory of good over evil and consists of prayers, chants, and dances performed by monks dressed in very colorful dresses.

Himalayan Wander Walkers have provided every detail of tiji Festival in this blog via photo, video and in written form to guide you for this vibrant festival of Lo people. Please go through the details blog of Tiji festival given below.

Tell us about your trip to Mustang, Nepal and what you expect from it. We will answer your questions in 24 hours and help you design a trip with a comfortable itinerary to best meet your needs.

Where and when does Tiji Festival happen?

One of the main reasons of international tourists comes to visit Upper Mustang for its vibrant religious Tiji festival, locally known as Tenchi. Tiji Festival is popular religious ceremony that held at the courtyard of Lo-King's palace in ancient walled city of Lo Manthang, northern Mustang region of Nepal bordering with China by Kora la (4,660 meters), it has been considered the lowest drivable path between Tibetan Plateau and the Indian subcontinent. It is currently being planned as a vehicle border crossing between China and Nepal.

The date for Tiji Festival 2022 is already updated. Tiji festival will be celebrated on english date of 27th, 28th and 29th May 2022 in Upper Mustang. According to the Tibetan, lunar Calendar is held annually for three days from the 27th to 29th of the 3rd month every year. It is possible to do the whole trek depending upon the teahouses.

How to Reach Upper Mustang?

To reach Upper Mustang, flight is the best option to save your time. Majority of the travelers from Kathmandu drive to Pokhara and take a flight to Jomsom. From Jomsom some prefer to trek and others drive to Upper Mustang. If you have enough time then trekking is recommended to experience the authentic culture of Lowa, locals of Mustang. Read our Upper Mustang Travel guide for more detail.

Among the three major Temples (Gompas) Thubchen and Chode Monasteries will remain busy during the Tiji Festival. All the three days monks chant prayers in the morning.  If you are morning person then you can participate and assemble with the monks in Thubchen Monastery. Each day the actual mask dance of Tiji festival starts around 2 PM and lasts for about 3 hours. All morning of the first day you could see locals sweeping the palace square and sprinkling water into the alleys and the main square where the dance would happen. Monks are shuffling around the village carrying furniture, carpets, masks and all sorts of instruments that would be used later in the festival ceremony in the palace square.

Most of the foreigners take advantage of this hustle and bustle and leave the village for hikes around Lo Manthang. Marzon is one of these places, a collection of caves all dug in one impressively large rock, pocked with holes in its entirety. Locals say that it used to be both living quarters and meditation caves of Bonpo Lamas in the early time. There are numbers of things that you can do such as horse riding, four wheel drive, visiting Yak herders (Dokpa), Hiking to Teri Khecho Ri, hiking to Thinger (summer palace of Lo-King) and exploration of caves and monasteries in Chosar. During your stay at Lo-Manthang there are number of things to do which are worth to experience them.

The festival last for three days which are explain in detail below. 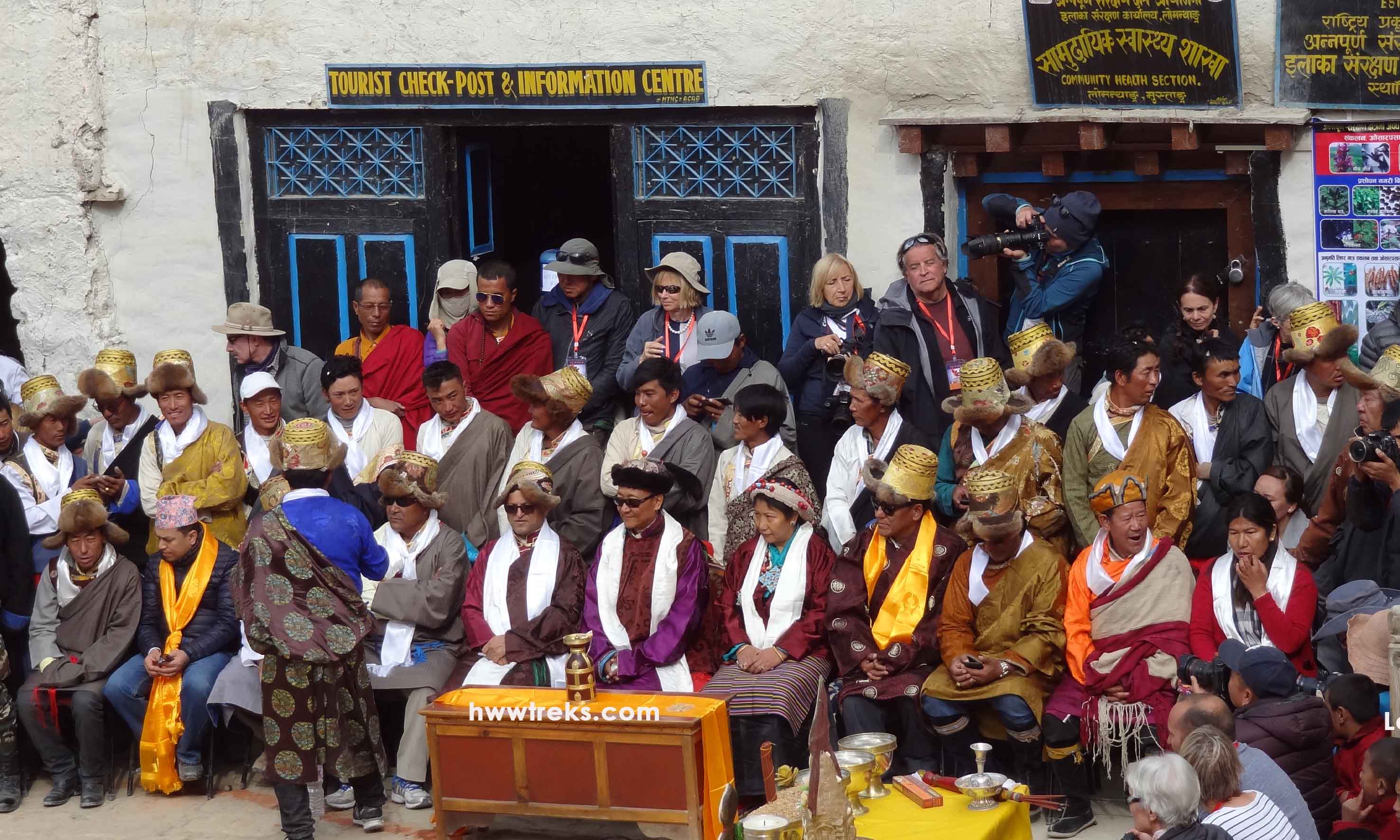 Today, on the first day of the festival, the monks performed a dance called “Tso Chham” in which they reenact the harassment of the demon, Ma Tam Ru Ta. The sacred dance is the part of the meditation practice based on the Tantra text related to Vajrakumar/Vajrakila. Its original name is Tenpa Chirim that confers the benefits of Buddha’s teaching to all sentient beings. According to the Buddhist tradition in Mustang the performers of this dance receive the empowerment of Vajrakila especially the Tsowo (Head of the mask dancer), who had to complete a three-month meditation retreat before the festival. Tiji festival is attended by the members of the Mustang royal family as well as by all the villagers of the seven provinces of Upper Mustang who come to witness this sacred dance. 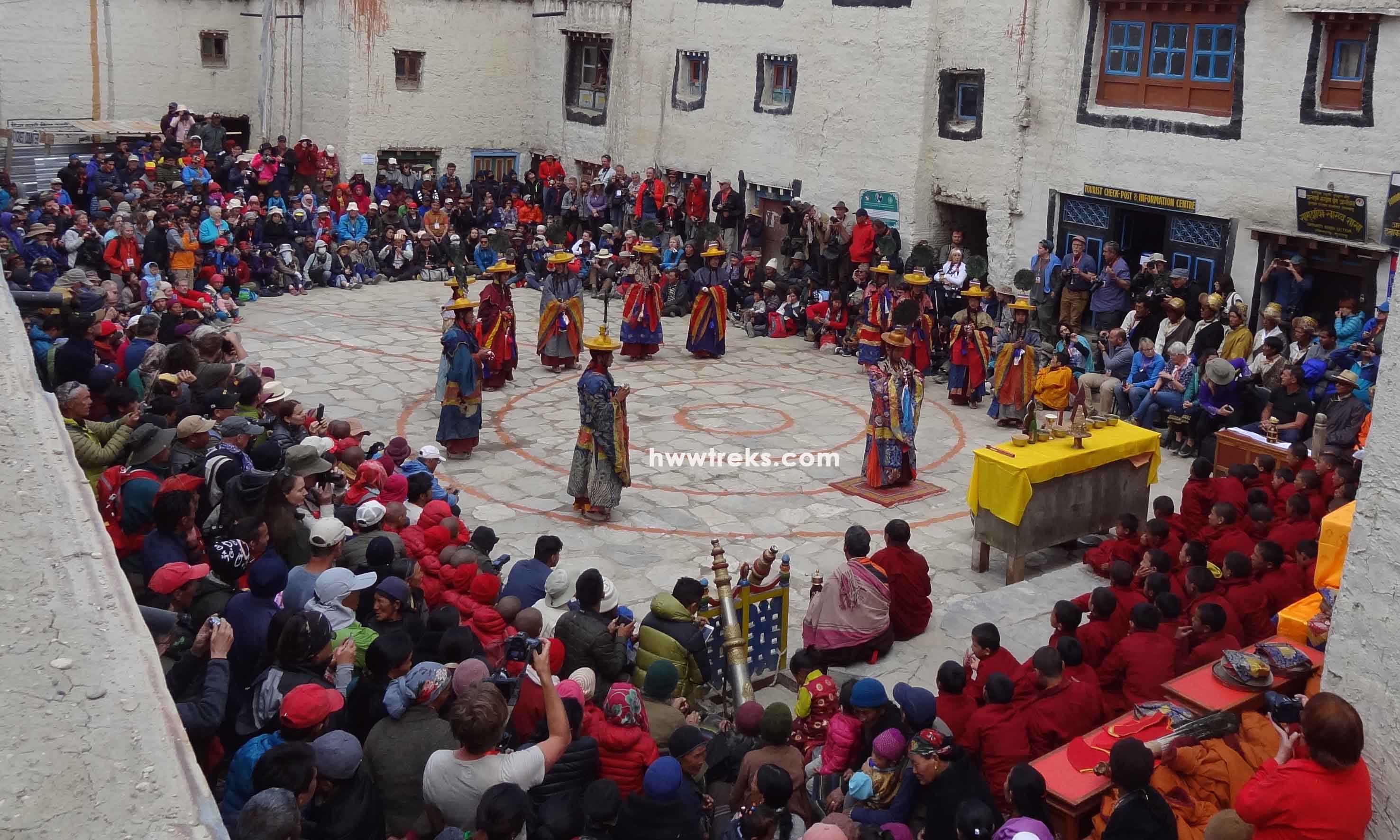 The dances performed on the second day of the festival are called Na-Cham that has different significance. It marks the birth of Dorje Sonam, whose demon father is watching the event from under a blanket in the middle of the square. Of course, the birth is actually a rebirth that goes through a Bardo and the dances are performed first by the same dancers as in the first day, followed by terrifying manifestations that are meeting the soul in his way through the Bardo (transition of Death and Birth) till its rebirth. The dances have a sense of comic on occasions to be pleasing to the audience that cheers when they feel that the demon would be further challenged.

You will witness numbers of dances including some terrifying masks which resemble the protector deities of the royal families who try to guard the soul in its travel through Bardo.  Dance of skeletons who come shivering are the deities that come to receive the soul of death.  Then the group of dancer with animal masked deities can be seen on various frescos in Tibetan Buddhist temples; bird, tiger, horse, pig, etc. The dog masked performer keep conferring over a box that contains the demon – shampa and he make give a piece of the death shampa to all the surrounding masked deities whom they are able by this process to fold them into Buddhist transforming them in protectors of the dharma and fighters against the demon. 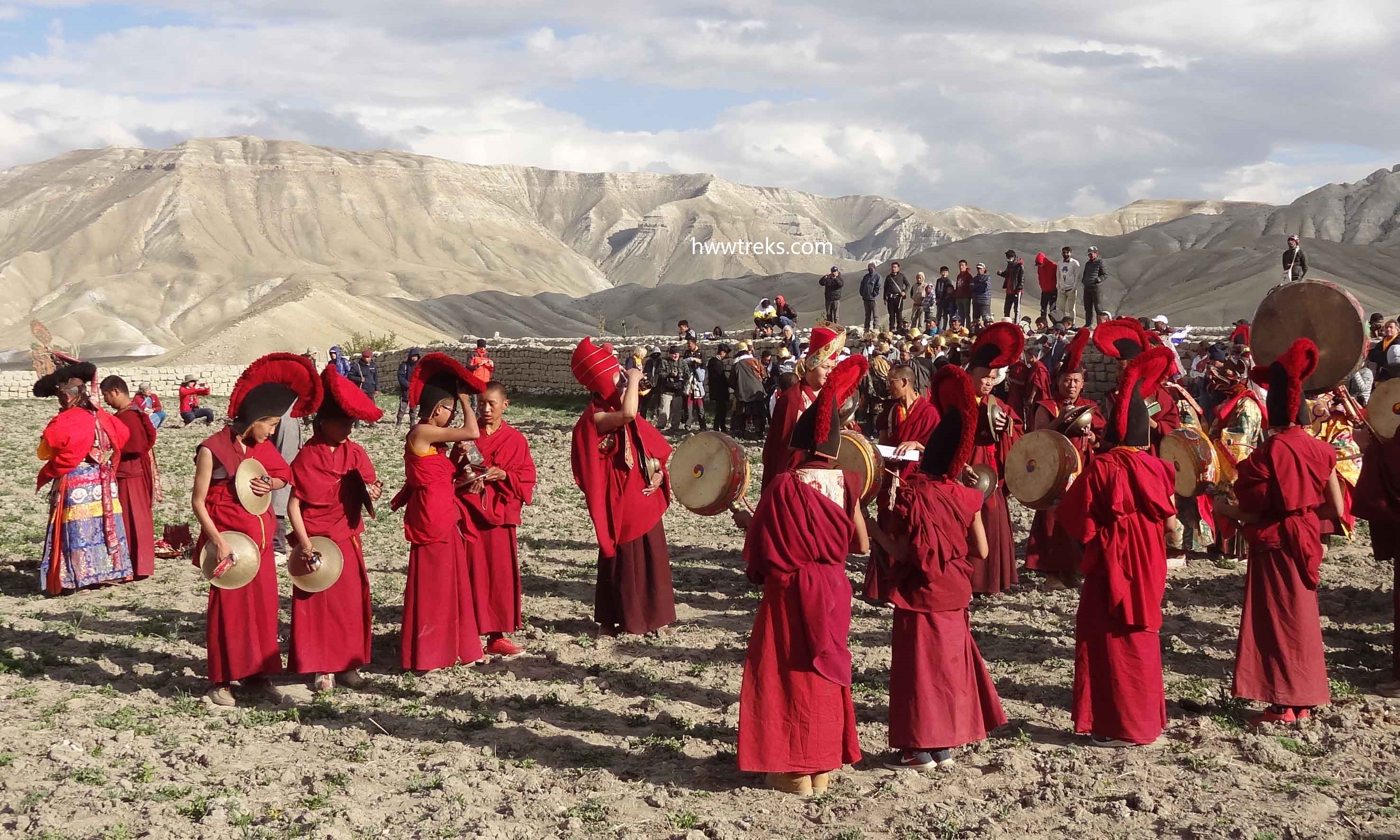 On this last day, the entire setup has changed: no more circle for the dancers, the place for the drummers were in the middle of the square; the audience was quite small, most of the foreigners left already because of the limited 10 days of permit. But the third day is the most interesting of entire festival. All the villagers of the entire Upper regions surrounding Lo Manthang assemble in one tiny square. If you are planning to visit upper mustang during this grand festival, we recommend every visitor to keep full three days to witness Tiji.

The haunting music of the telescoping trumpets and drums gave way to the Tsowo, who impersonating Dorje Sonam was keen to destroy once and for all the demon. Tsowo use different Buddhist tools such as a three colored rope, Tibetan bell, the purbhu (sacrificial knife) or dorje that is carried by all lamas. Then the entire team of performers walks outside the ancient wall with chanting and spiritual music. You will see how the local people are mesmerized by the sounds and the elements of the entire show the monks were able to put together. This will end up in an open field at edge of the town.

In the field, Tsowo does his final spiel (or spell). He start his dance by the incessant drumming and haunting horns and took a bow and hit somewhere in the field, symbolizing that he hit the demon, or remaining demons, right in the middle of the forehead. He took after that a slingshot (used by Tibetan cattle herders) and sent two stones in the same direction hitting symbolically the demon again. All was done on the background of gun power fired from old muskets by the many locals in charge with this task, probably about 10 shots at a time. The noise was terrifying and was supposed to scare any other demons that may have had any ideas to come on this realm.

Tsowo’s last act was to recites prayers and dispose of each of the demons’ food, a process done with the same noise of gun powder muskets. The job completed, Tsowo and his entire monk retinue started to get back in town with all the audience following in pursuit and all passed together inside the walled city, now cleansed of all evil, stepping at the main gate over a hay fire where we were supposed to spit out all our evil left in each of them. Then all the mask dancers including the Tsowo return to the palace square and the king and locals offers Tibetan scarf (Khatak) to all the performers as a thanks giving way.

Day 5: Drive to Sangmochen and hike to Chungshi Cave Monastery.

Day 17: Fly from Jomsom to Pokhara transfer to Hotel

Day 18: Tourist Bus Journey or Fly back from Pokhara to Kathmandu

Day 19: Final Departure to your port of Destination

There are two main reasons that the details of this story is still lacking. They are locals do not know the details of the dance no matter that probably they watched it numerous times. Second reason is that this is all about tantric teaching and normally monks refused to answer.

Tiji Festival is popular religious ceremony that held at the courtyard of Lo-King's palace in ancient walled city of Lo Manthang. Tiji festival is celebrated every year between April and May in Upper Mustang. During tiji all the guest houses and hotels of Lo-Manthang get busy with their guests who came to witness the mask dance of local Monks by trekking, overland drive and some even by helicopters. 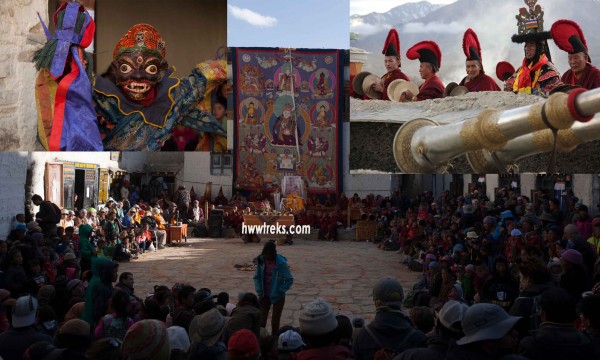 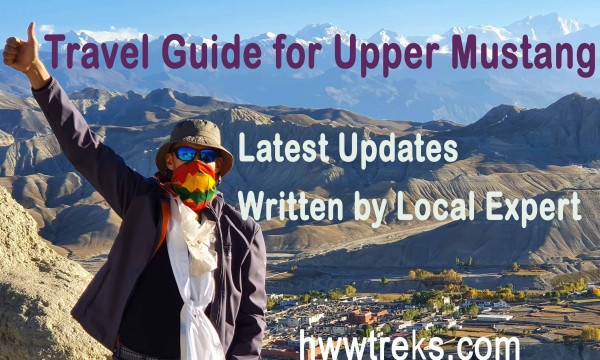 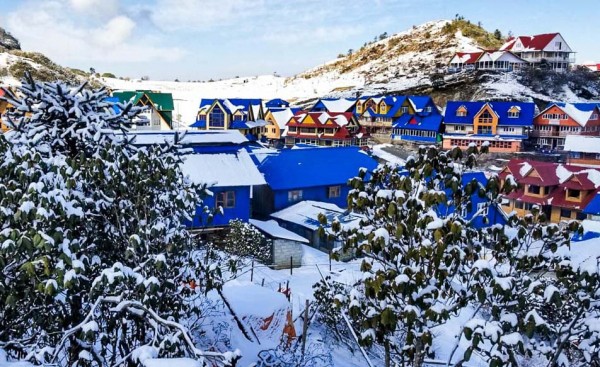 A short Trip to Kalinchowk 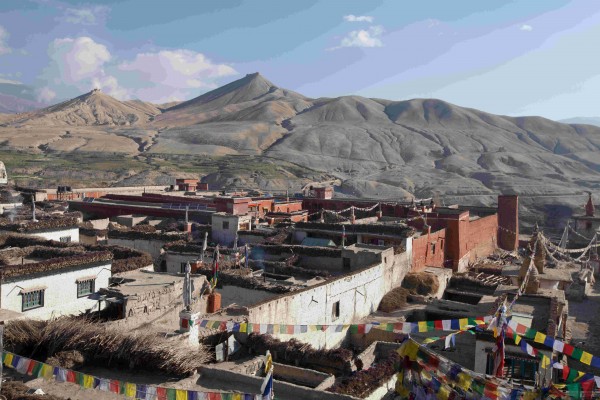 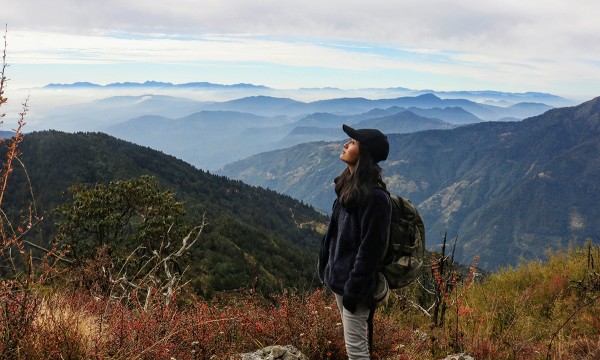