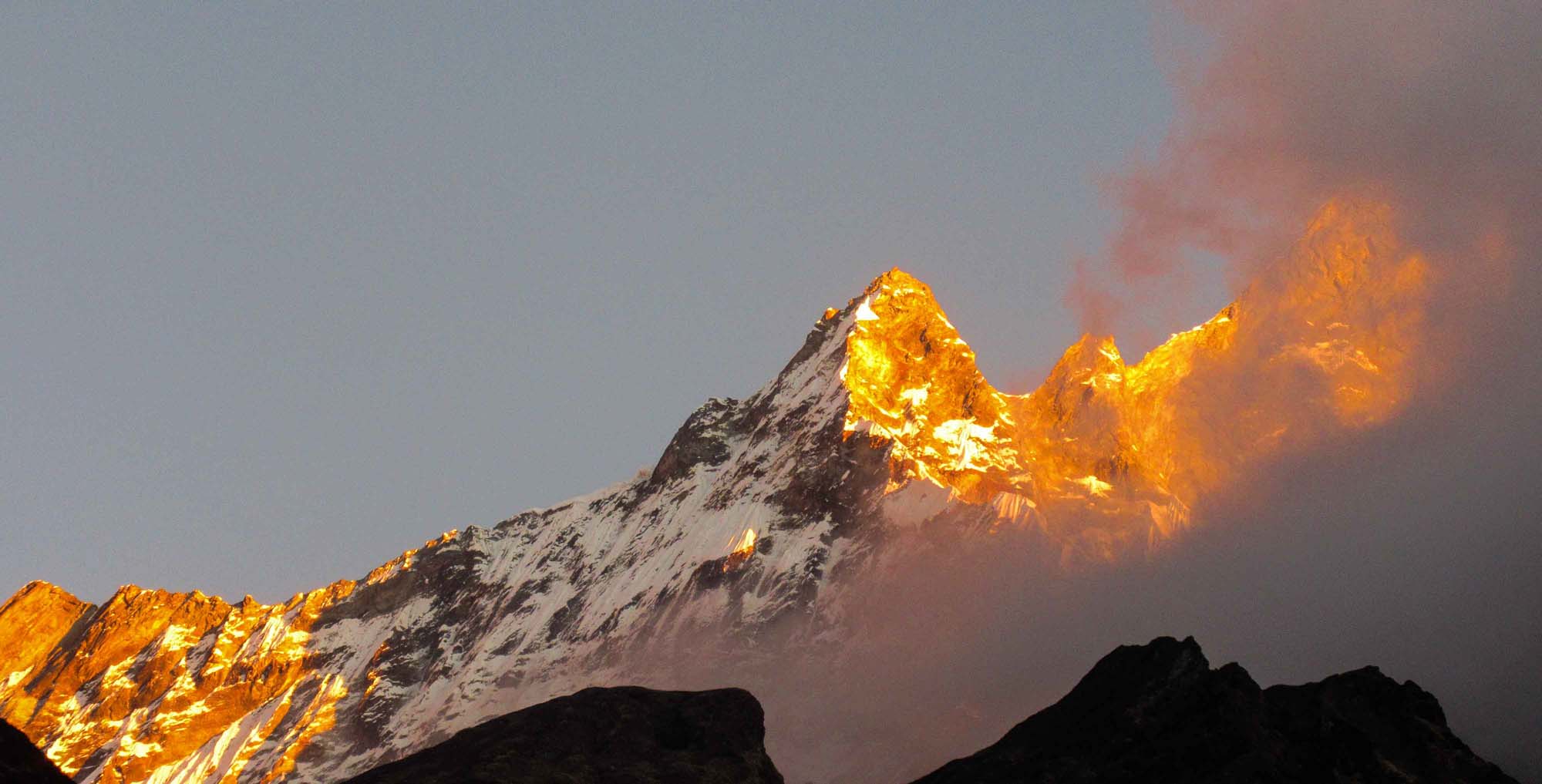 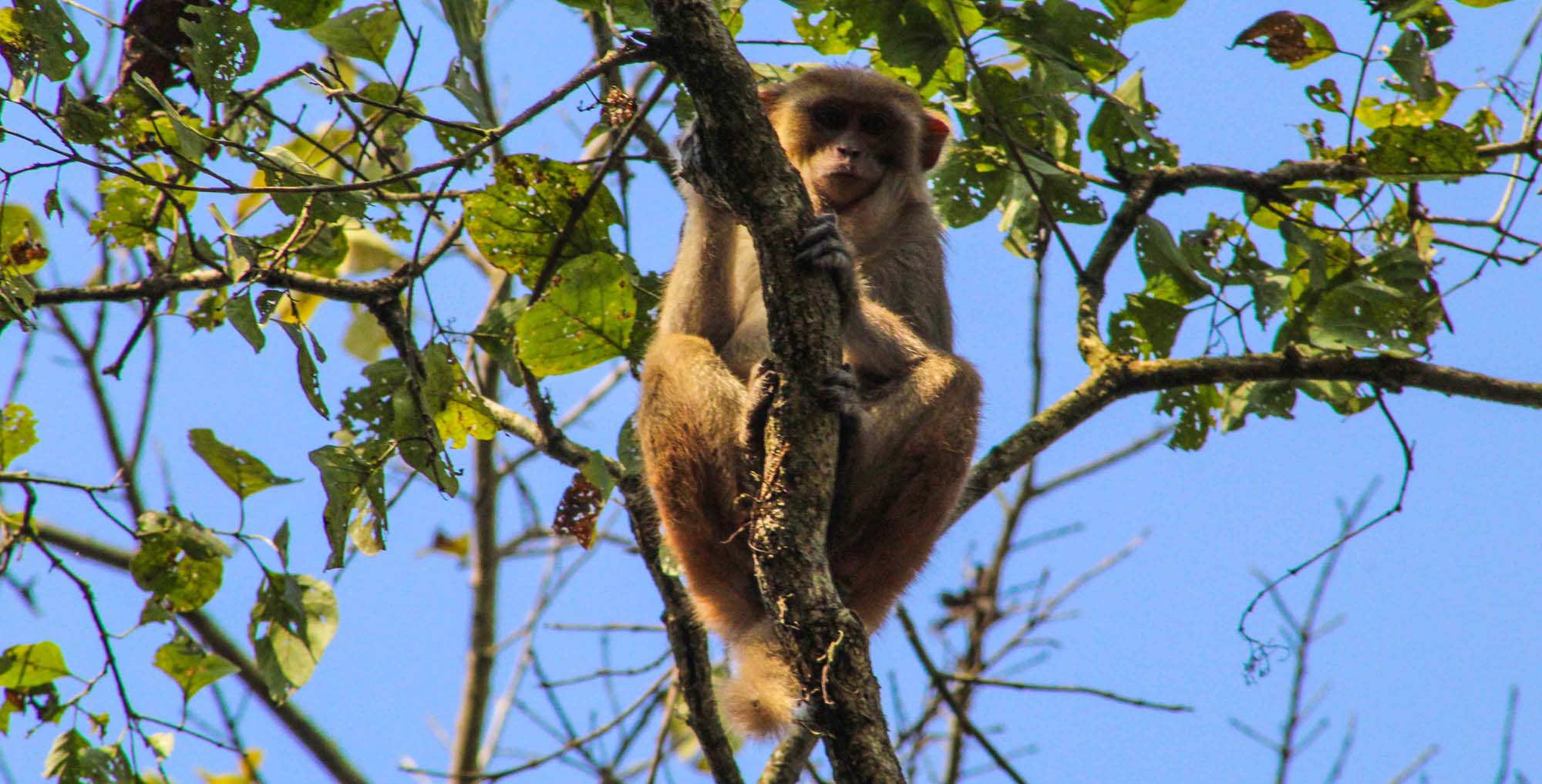 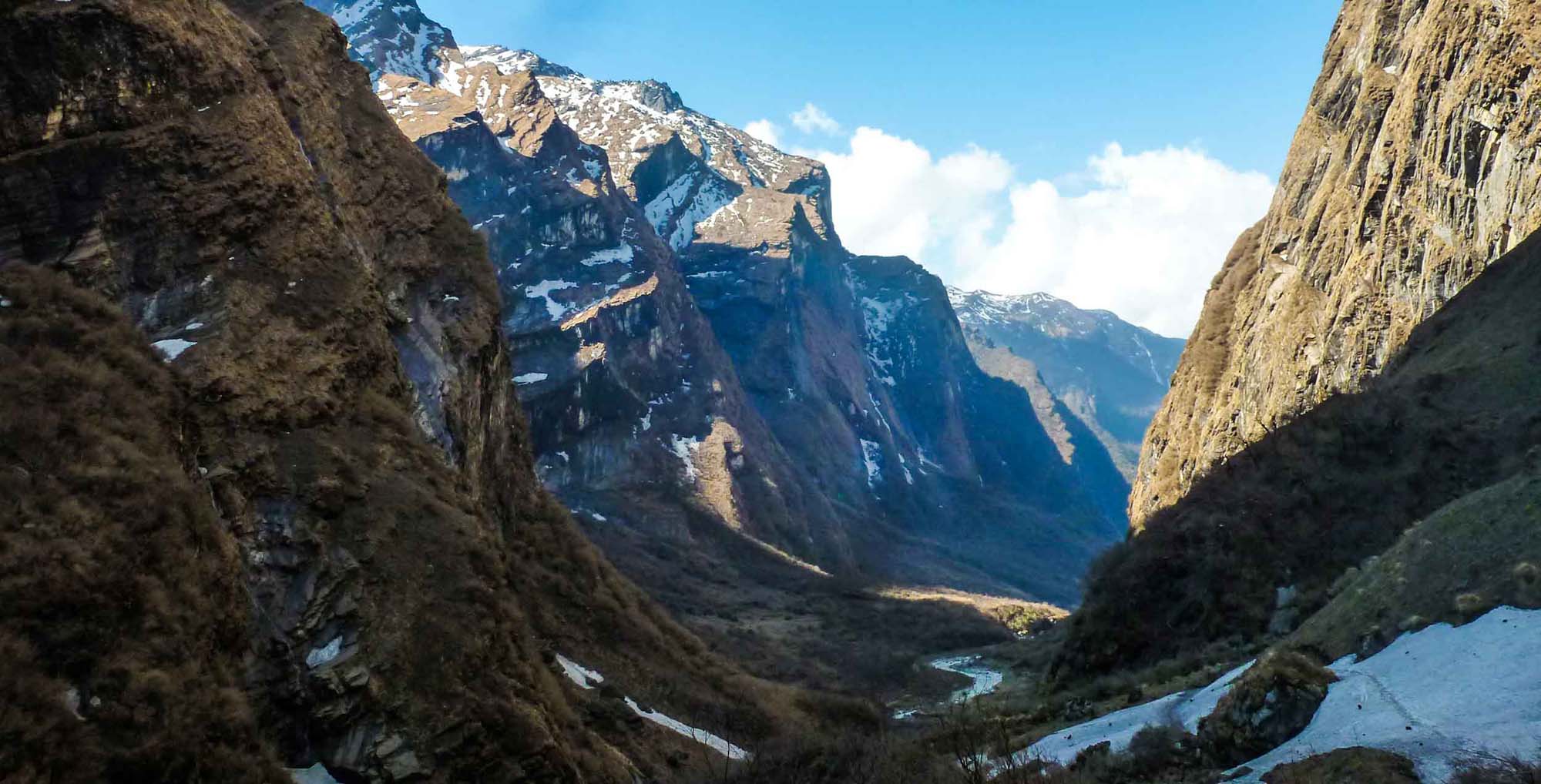 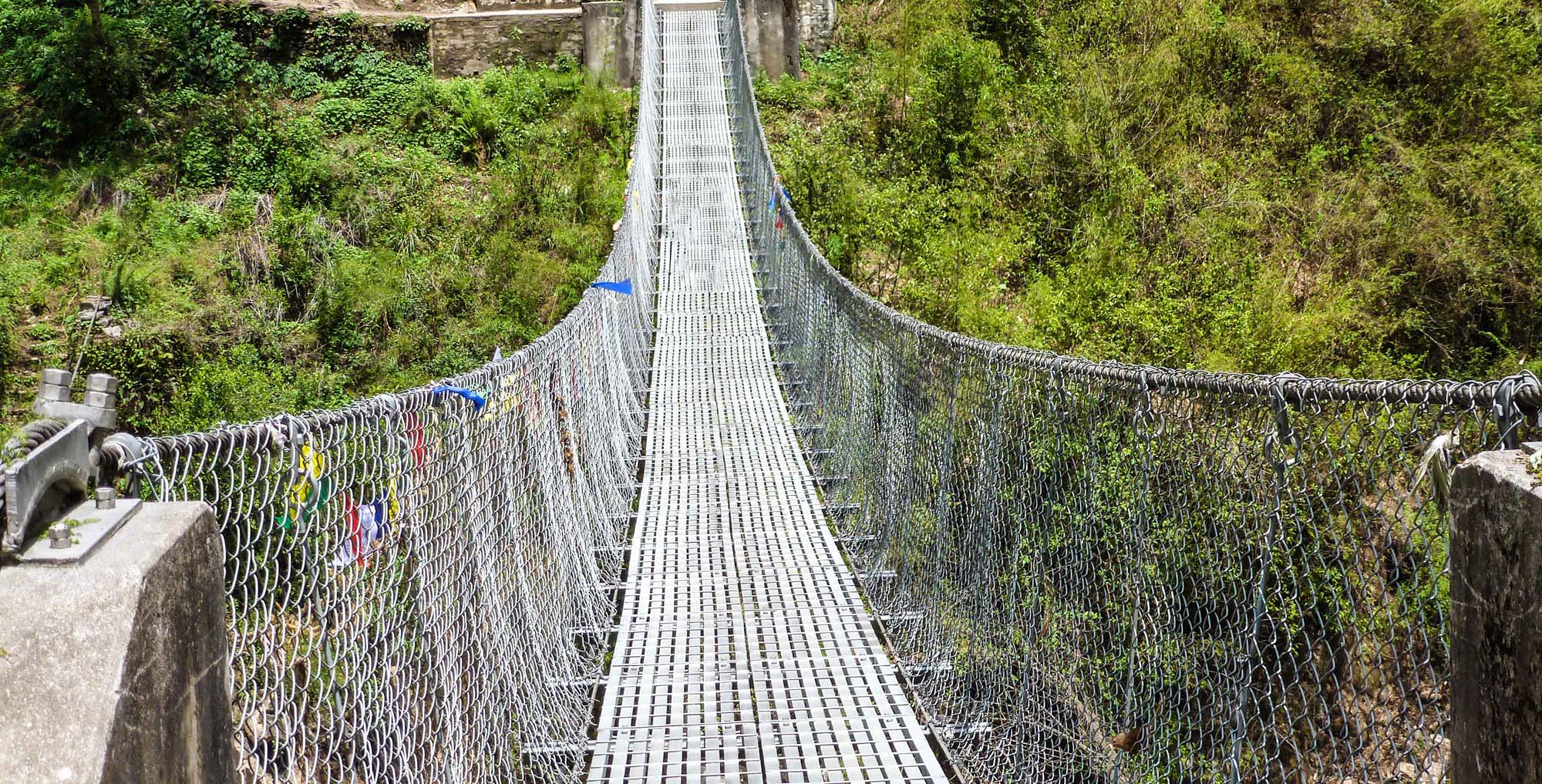 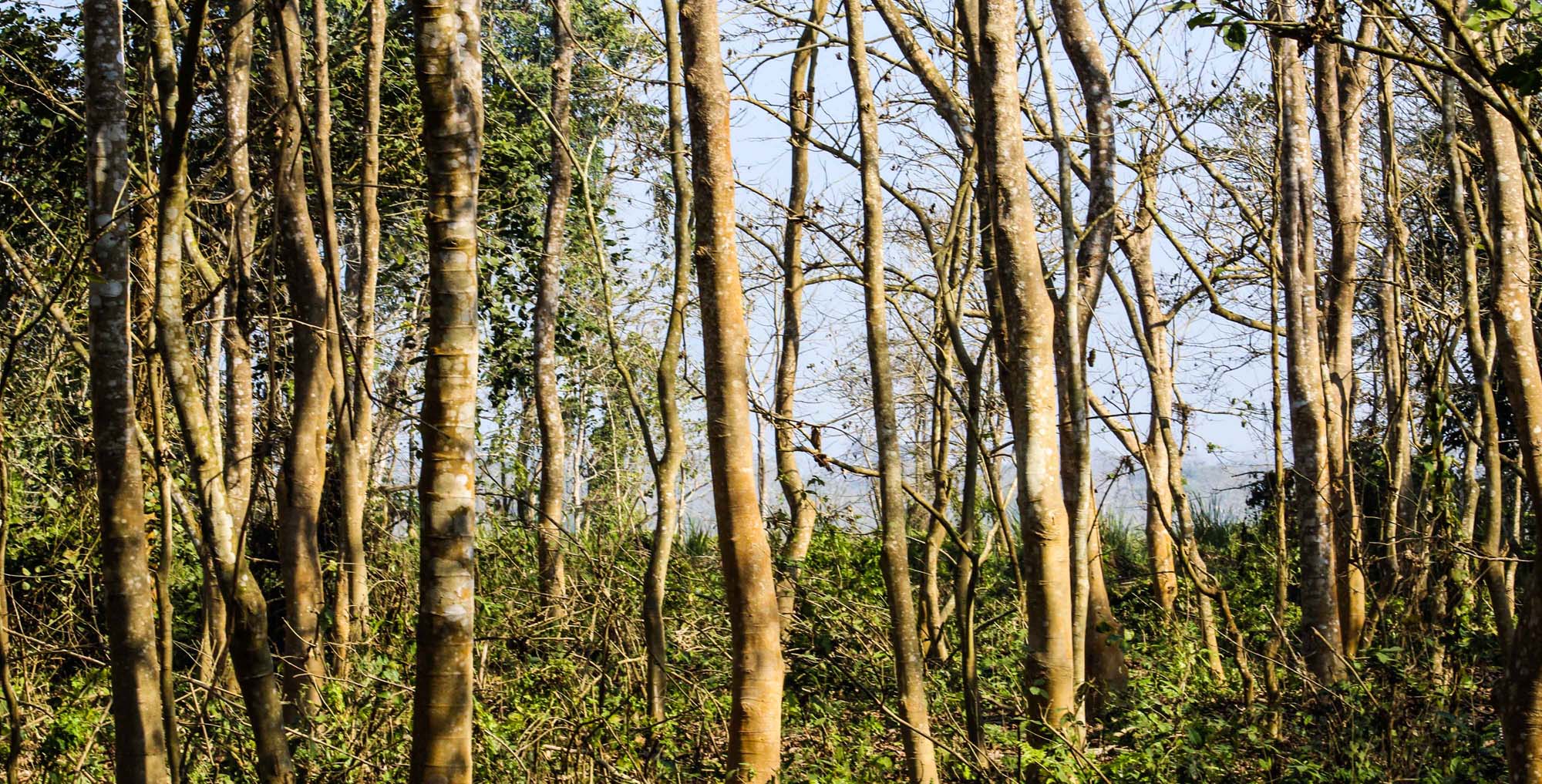 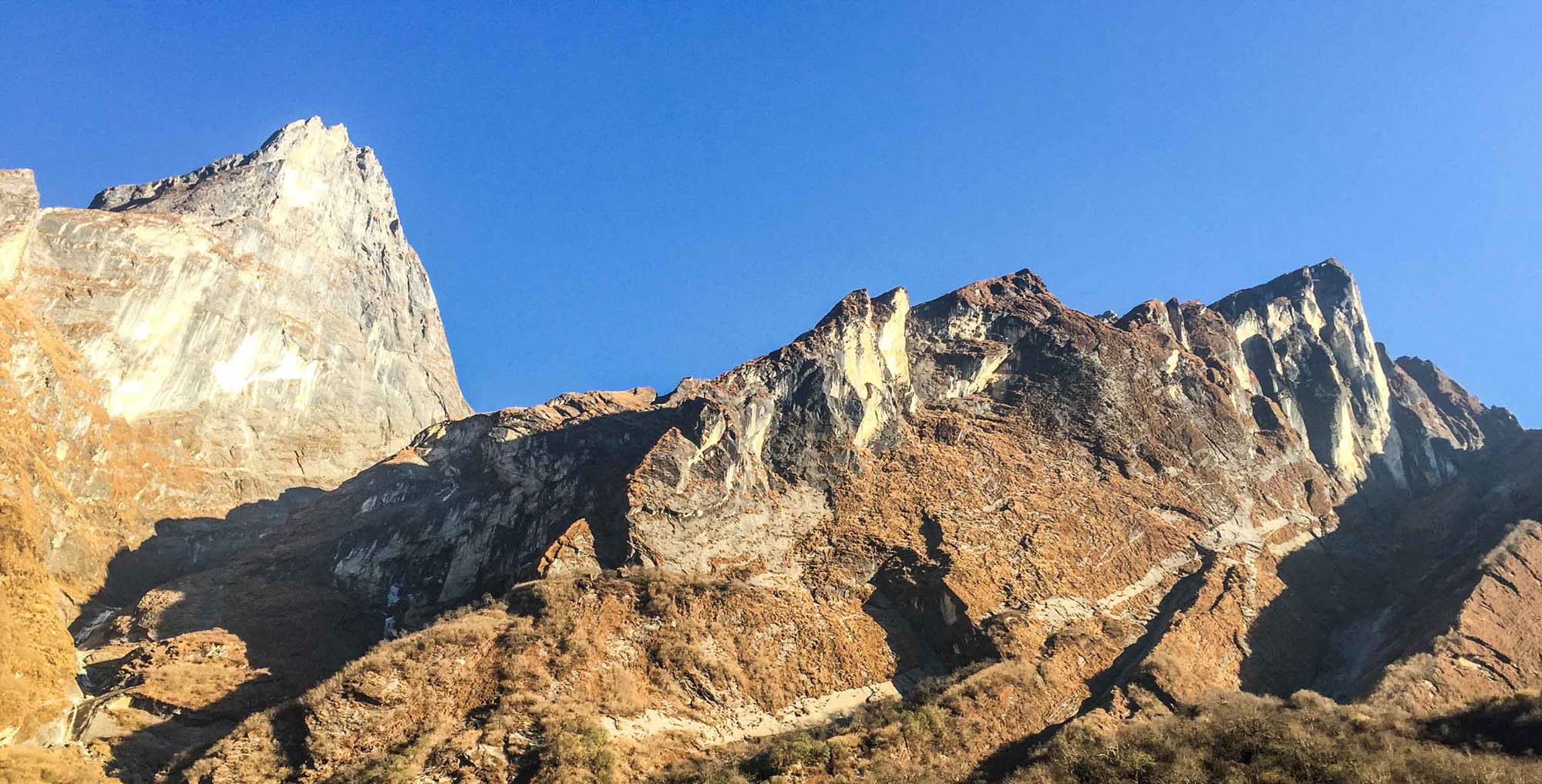 “The Annapurna Base Camp (ABC) trek is the tranquil and best scenic base camp trek in the Himalayan world.”

Annapurna base camp is commonly known as ABC (4,130m) but it is also called an Annapurna Sanctuary Trek (Annapurna Deuthali in Nepali). It is one of the most popular trekking areas in Nepal. The peak trekking season is swarming by making all available tea houses not enough for trekkers for their lodging. This trek offers fine close-up mountain views without the acclimatization problems like the Everest regions. The trekking trail to spectacular ABC completes in one week. Although it has some long steps ascents and descents, mainly on stone steps and the trek will not be difficult as we move with the team enchanted by natural beauty on the pathway. Following the Annapurna Base Camp trekking route gradually uphill, we get to enjoy panoramic views of Hiunchuli, Machhapurchre (Fishtail), and Annapurna South peaks.

In Annapurna Base Camp there are terrific views of the close-vertical south face of Annapurna I (world 10th highest mountain- 8091 meters) towering above the sanctuary to the northwest. The ascent of this face in 1970 by an expedition led by Chris Bonington remains one of the most remarkable climbs of 8000 meters peak. Generally, morning is the best time for the views of the mountain. Mountains seen from ABC are Tharpu Chuli (tent peak 5663m), Singu Chuli peak; 6501m, Hiunchuli; 6441m, and South Annapurna; 7219m. Just behind the Paradise guest house, there is a memorial Chorten (Buddhist stone monument) build in memory of well-known climber Anatoli Boukrev from Kazakh who died in 1997 in an avalanche.  That is the main viewpoint from where you will see prayer flags with different countries' flags attached to them. On the left side of the way to Chorten, you will see the shepherds' hut. Next to that, you will see a flock of sheep in the evening. When you follow few minutes ahead of the shepherds' hut you will see another stoned Chorten which is built for the memory of three Korean climbers; Park Young Seok, Shin Dong-Min, and Kang Ki- Seok who lost their contact with the base camp team on 18th October 2011. Three minutes beyond the Korean memorial Chorten, you have a wonderful sight of Annapurna glacier view.

The highlight of the Annapurna Base Camp Trek

Upon your arrival at the Tribhuvan International Airport in Kathmandu, you will be welcomed by a representative of the Himalayan Wander Walkers. You will be checked into your hotel. You will meet our trekking operator for a briefing about the entire trek on this day. You can either rest or hang out around a famous tourist area in Kathmandu, Thamel.Overnight at hotel set with BB Plan.

Our office staff will pick you up from the hotel and escort you to the tourist bus station. You will drive to Pokhara around 6/7hrs which is 200km from Kathmandu. A beautiful valley set on the bank of Phewa Lake, Pokhara is also known for its panoramic views of Annapurna, Machapuchare (Fishtail) in the north, Dhaulagiri in the west, Lamjung Himal, and Manaslu in the east. It is smaller and much less hectic than Kathmandu which provides the perfect starting point for our trek.Overnight at the hotel.

Today you will drive to Gandruk, a Gurung village. It will take approximately 3 hours to reach Gandruk via Nayapul and Birethanti, a tourist check post. After arrival, you will have your lunch and then visit the typical Gurung village with your guide.
Overnight at the teahouse.

After breakfast, you will start your second-day trek to Chomrong village which is the last settlement to the gateway of the Annapurna base camp trek. The trek starts by descending down from the Ghandruk village to the Kyuri Khola and then following the trail which leads to Kumrong Danda. On the way, you will pass through the terrace farm, and bypassing another hill will take you to Gurjung which is the village of Gurung people, with an easy walk to Chomrong at an elevation of 2,170 m.Overnight at a guesthouse.

Today the trail drops down to the Chhomrong Khola and again we continue climbing to Khuldighar- 2,380m. There used to be an ACAP (Annapurna Conservation Area) check post. As you go higher, you will notice the decreasing of the forest, from where the route travels steeply down to a rocky bank and then running through thickets of bamboo at the bottom of the gorge, keeping always on the west side of the river. We walk through bamboo, then rhododendron forests to the Himalayan Hotel (2920m).Overnight at a guesthouse.

Today the trail climbs up to the Hinko Cave, Deurali, and then Machhapuchhare Base Camp (which isn’t really a base camp since climbing the mountain is not permitted). This trek is totally surrounded by mountains an known as the Annapurna Sanctuary trek. Two hours trek from Machhapuchhare Base Camp takes you to the Annapurna Base Camp (ABC) at an elevation of 4,120m. There you will have unobstructed 360-degree views of the mountain, which is very spectacular and pleasant. This is the last point of the ABC or Annapurna Sanctuary Trek.
Overnight at a guesthouse.

We follow the same trail down which drops by 1,700m to the bank of Modi Khola to Bamboo at 2,345m where there are a few teahouse/lodges available to stay.Overnight stay at teahouse.

We follow the same trail until Chommrong. Once we have passed Khuldighar there is an experimental sheep farm. The trail continues through rhododendron and bamboo fields. From Chomrong the trail descends very steeply to the Jhinu Danda. You will enjoy a natural hot spring which is also the treatment for different diseases related to the skin.Overnight stay at teahouse.

Our trek start from the right side of Modi Khola about 4.5 hrs to Birethanti which can be considered as one of the best and the most relaxing walks of the entire trek. We will reach Nayapul and after an hour of the drive will take us back to Pokhara. In the evening, you will have a boating program on Fewa lake and visit the Hindu Temple of Tal Bharai which is situated on the small island of Fewa Lake.

Drive back to Kathmandu

After breakfast, you will return back to Kathmandu which is of 6/7 hours drive. You have the option to extend your trip to continue onto Chitwan jungle safari, rafting adventure, Kathmandu valley shopping tour, and scenic Everest flight, mountain biking, and other activities.

Final Departure to your port of Destination

Three meals a day; breakfast, lunch and dinner during the trek

All the International air fare from and to Kathmandu

All meals and accommodation in Kathmandu and Pokhara 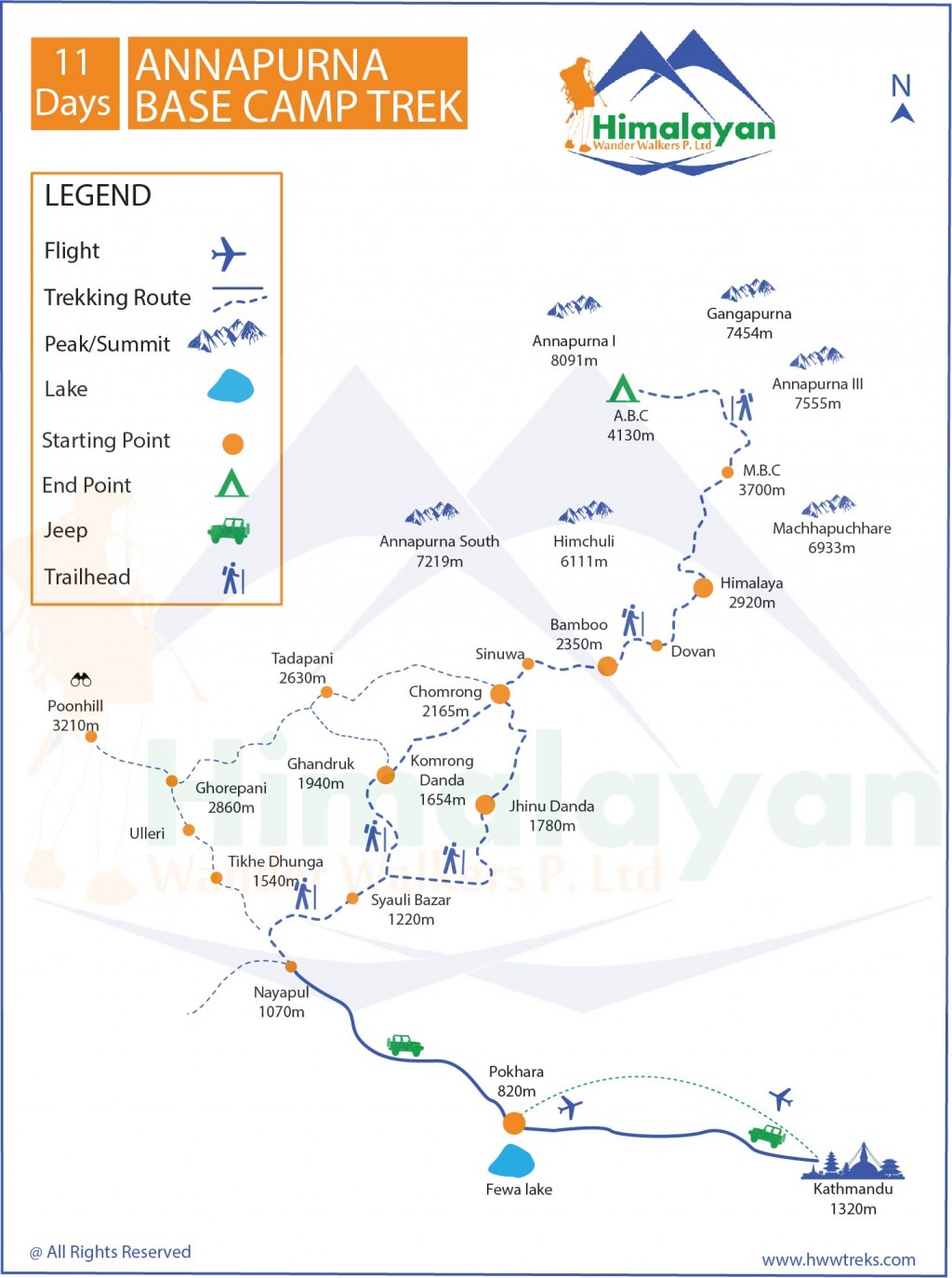 Guiding, Food, and Lodging
In Nepal, all trekking supplies - Teahouse trekking means staying and eating in local lodges. We stay in single rooms where possible, but often you will have to share. Rooms are basic, normally just a bed with a pillow, blankets. A few have electric lights and all have a spacious dining room-lounge. We eat at teahouses and, although the food is usually plentiful and delicious, the menu is not extensive. They offer a variety of potatoes, rice and noodle dishes, as well as soup and seasonal vegetables. Beers and local spirits are often available, but that will be at your own cost. A variety of cereals, bread, and egg dishes are generally available for breakfast. There are also snacks available such as basic biscuits, chocolate, and soft drinks and in some areas, you will find fresh fruit in season. It is normal to meet your porter in the teahouse where you will stay overnight. So, pack your necessary things in your own day pack.

DRESS CODE FOR VISITING MONASTERIES, AND TEMPLES IN NEPAL

Note regarding itineraries
Although we generally adhere to the schedule, the itinerary is subject to change for numerous reasons beyond our control, including weather and terrain conditions, suitable campsite availability, and the group's general fitness level. It is important to understand that our trek is logistically complex and it is not unusual that adjustments be made. Our guide will orient you each evening to the following day's plan; their good judgment is the key to the long history of successful treks that Himalayan Wander Walkers has led till now. Please remember that our ability to make adjustments as needed helps to ensure that your trek is successful.

“Poonhill, a scenic viewpoint which offers a gorgeous panoramic view of the Annapurna and Dhaulagiri mountain ranges.” Poonhill (3,210m) Trek is also known as Annapurna panoramic trek. It is a popular trekking destination in the Annapurna region. Within four to five days of the...