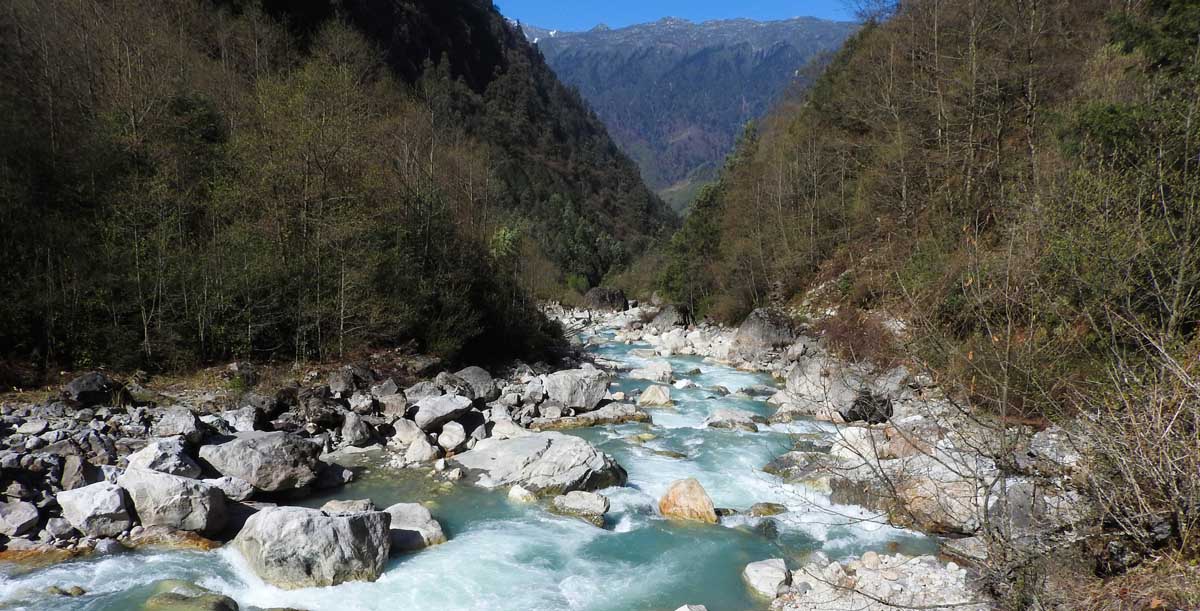 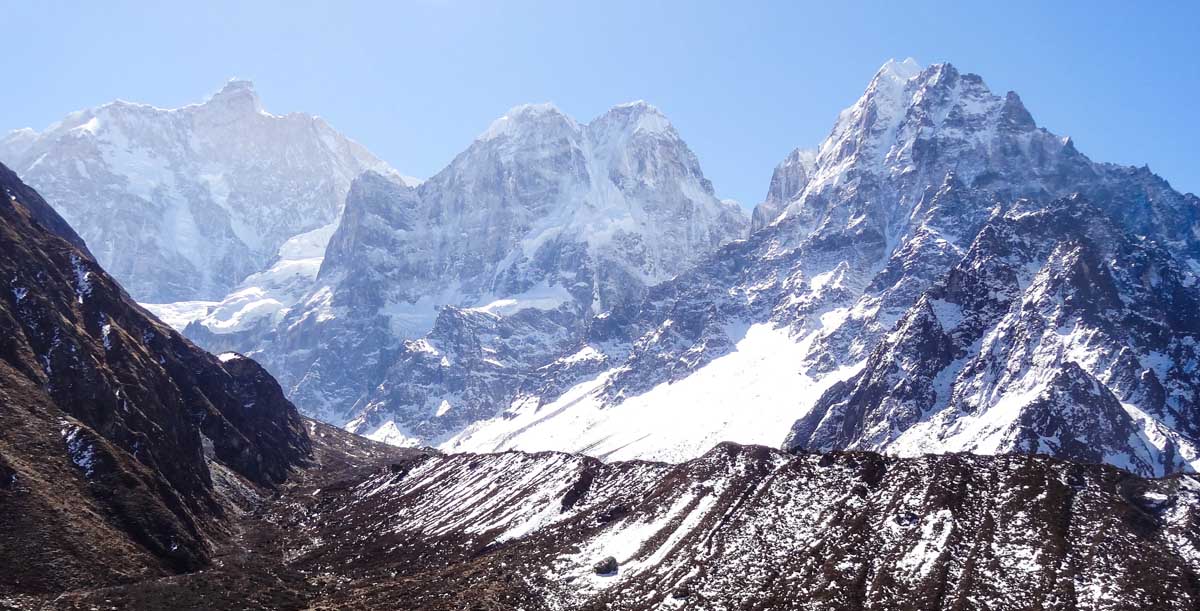 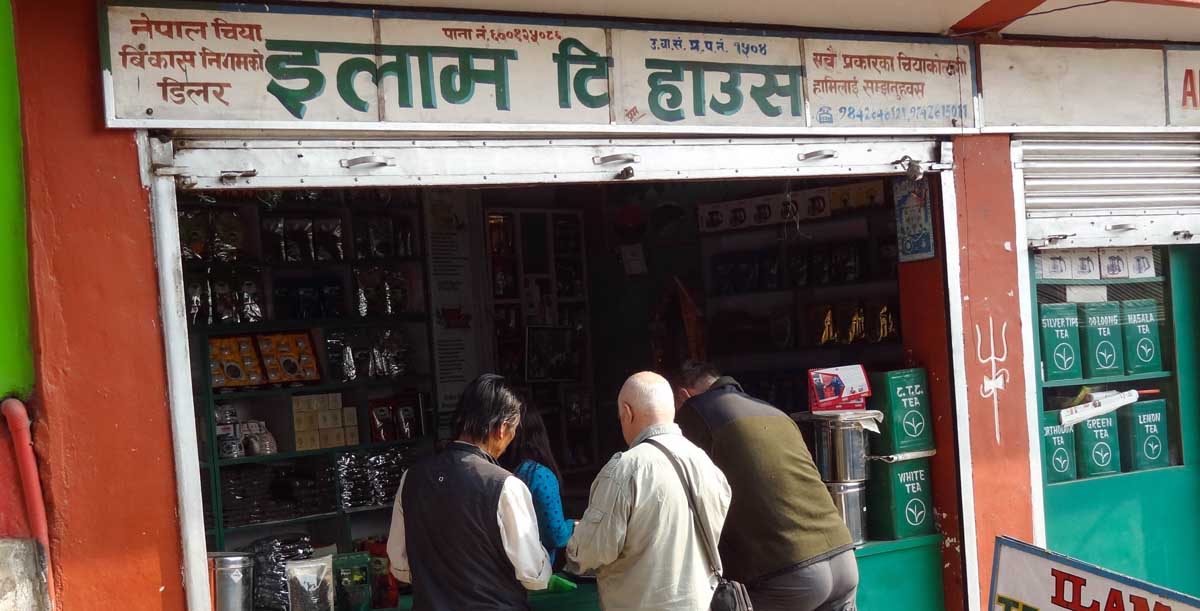 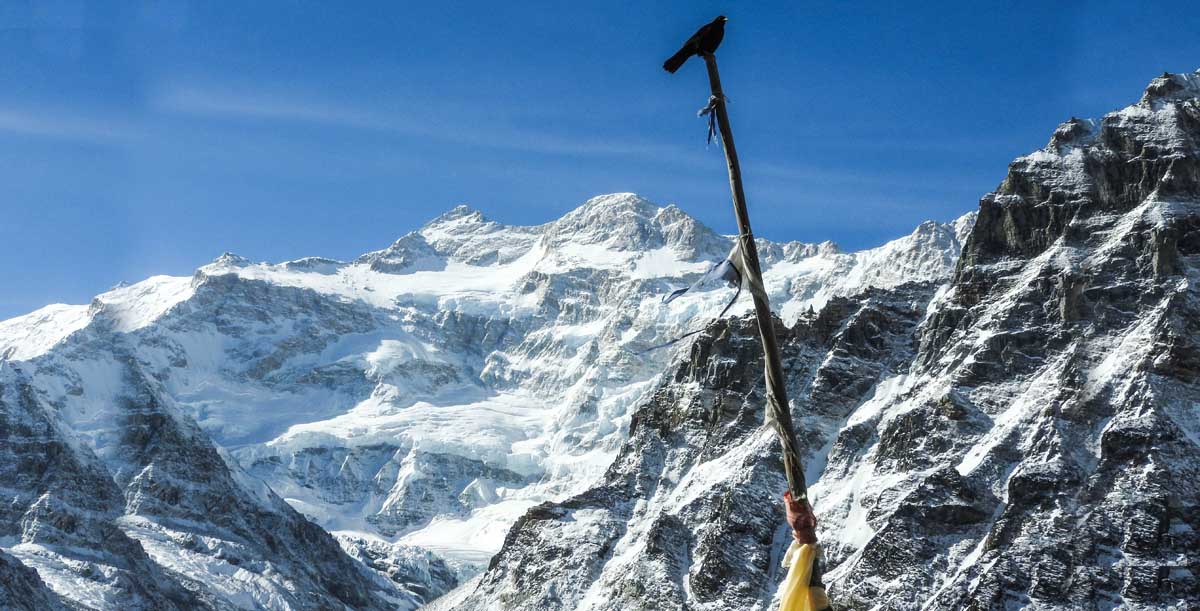 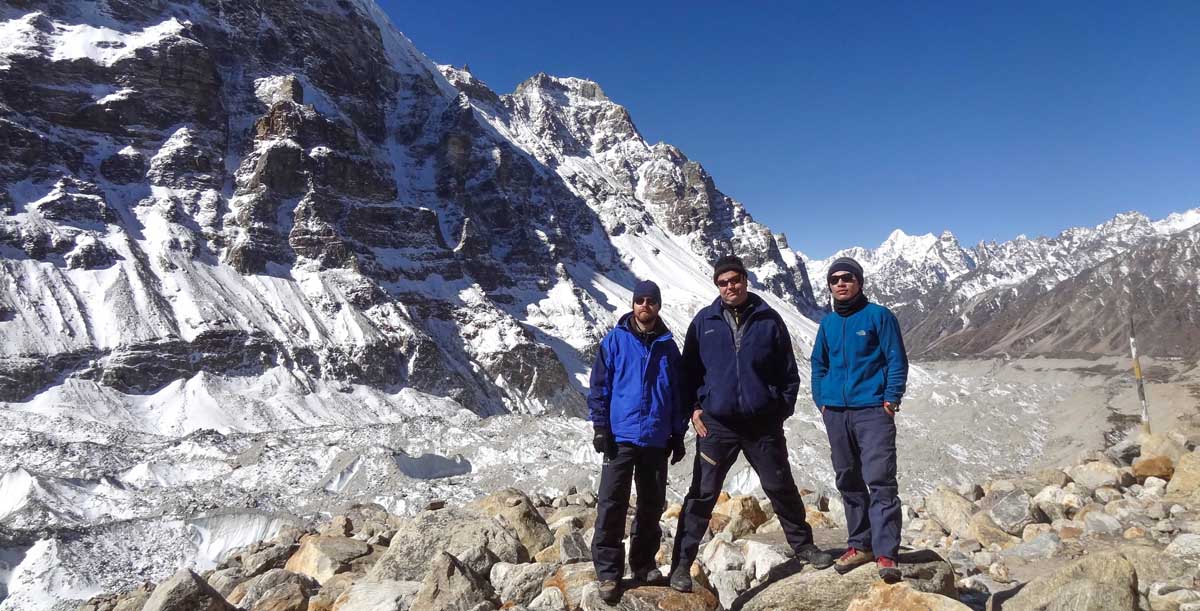 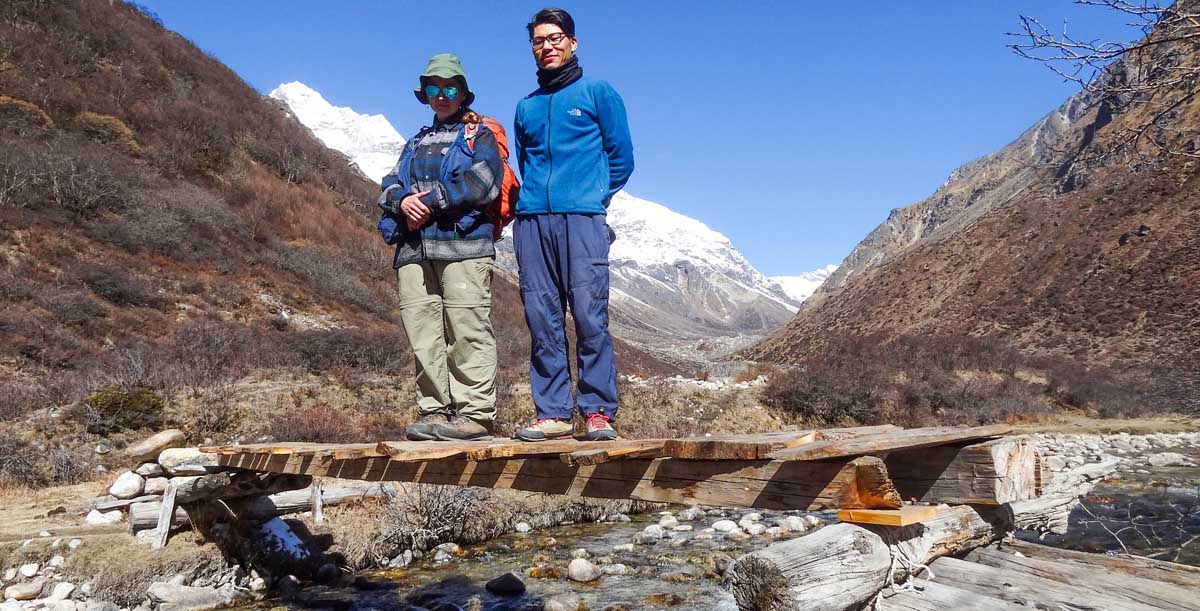 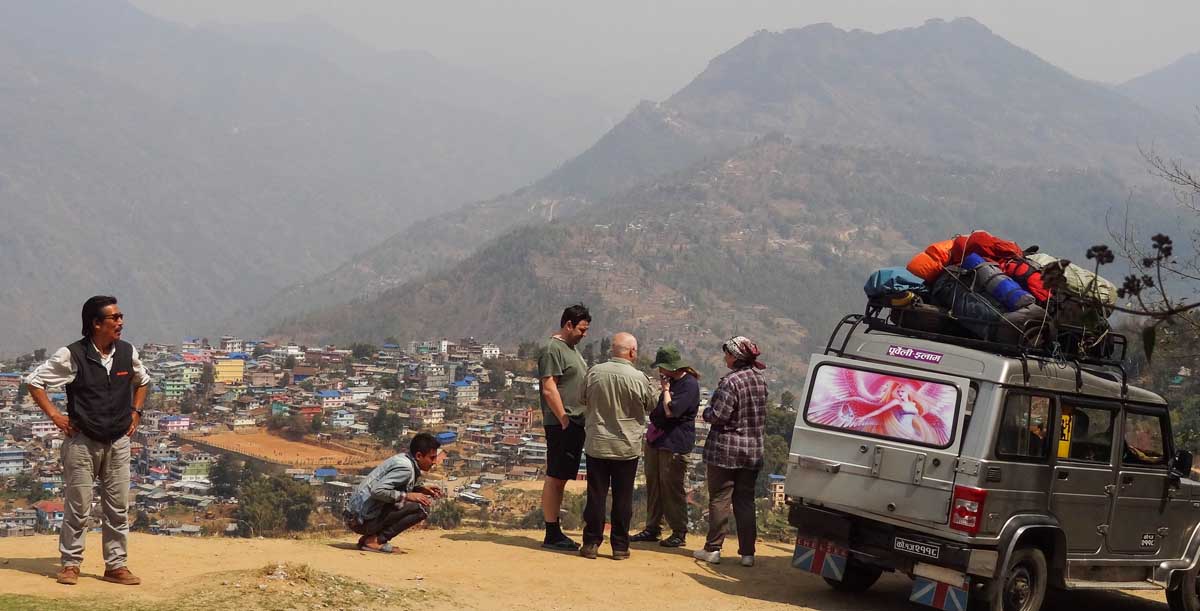 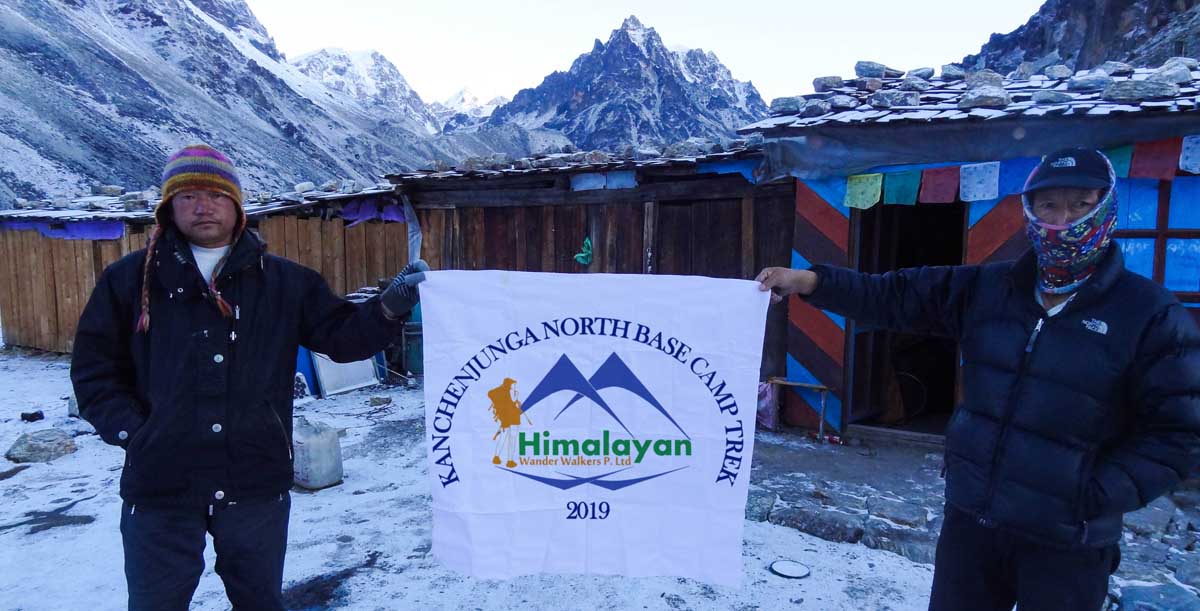 Kanchenjunga North Base Camp Trek is chosen as a less crowded and off-the-beaten route for Himalayan treks in eastern Nepal. Because of the difficulty in trekking to this area, it is considered a strenuous trek. This trek starts from the elevation of 1350 meters at Taplethok and reaches the highest point at Pang Pema (5,100 m) or Kanchenjunga North Base Camp en route the variety of landscapes like low land rhododendron forest, typical villages, high altitude moraine, and stunning glacier. From Pang Pema, you will have close-up views of the north face of Yalung Kang and Kanchenjunga. It is suggested by many trekkers to stay overnight at Lhonak and visit Pang Pema the next day morning to have a better view including the sunrise view.

Trekking to Kanchenjunga became popular because of the Kanchenjunga Mountain itself which is the 3rd highest mountain in the world. In addition to that this area is well protected by Kanchenjunga Conservation Area Project (KCAP) where you can explore the different cultures from your day one trek to the last day. World Wild Life Fund (WWF) is working on the conservation of different endanger wild animals like red panda, Asian black Beer, and especially snow leopard by collaborating with the KCAP.  This area is popular for Tea farming and cultivation of cardamom which can be seen on the trekking trail. This trek is perfect for all the snow-capped mountain lovers where the villages, people, and landscape provide real flavor to the trip.

Taking a flight from Kathmandu to Bhadrapur is the best way to reach your trek starting point at Rani Pool. If you are in a group of 10 and more then Himalayan Wander Walkers arrange a charter flight to Suketar which avoids the long drive from Bhadrapur to Taplejung via Illam. From Rani Pool, the dirt road leading to Olangchung Gola in the west and the trekking trail in the north. The trekking path follows the Ghunsa River via Amjilosa, Gyabla, Ghunsa, Khambachen, and eventually reaches Lhonak. After the exploration hike to Kanchenjunga North Base Camp, you will retrace to Taplejung and drive to Bhadrapur.

Arrive in Kathmandu and welcome assistance by Himalayan Wander Walkers representative at the Tribhuvan International Airport and transfer to hotel, rest at the hotel, and briefing about the trip.

Today after breakfast we will start the city tour to most historical and spiritual attractions in Kathmandu. These landmarks are considered World Heritage Sites; including the historic Hanuman Dhoka Durbar Square, the sacred Hindu temple of Pashupatinath, the famous 'Monkey Temple' (Swyambhunath), and the world's largest Buddhist stupa, Bouddhanath. Briefing regarding the trek with two-way question-answer with the trip leader (The Guide).

Flight to Bhadrapur and drive to Taplejung. 7-8 hours.

Early morning, we will have our breakfast at the hotel in Kathmandu and then we will forward to the airport and catch the flight over Bhadrapur which will takes 45 minutes to reach. After getting off the flight we will drive to Taplejung.

Overnight at the hotel.

You will have breakfast at Taplejunga and take a four-wheeler local jeep to Tapethok for 3 to 4 hours and lunch at Tapethok. After lunch, we will start our first day of trek crossing the suspension bridge on the Tamur River. Trial passes through the Cardamom field next to the stone-paved route which leads to Sekhathum.

The trekking route from Sukathum to Amjilosa is regarded as a bit challenging and rough. We need to cross the suspension bridge which is outside of the Sukathum village. Then the trail passes through the dense forest and gentle ascending via the hamlet of Zaubari. From laminar we need to cross the Ghunsa Khola and a steep climb will reach Amjilosa, a Sherpa village.

From Amjilosa, we will trek towards the river bank and through the dense forest of bamboo, fir, and rhododendron. We then climb uphill crossing several small bridges along the way. During the trial, we will enjoy the dramatic waterfalls which are originated from the mountains. We will continue until we reach Gyabla.

From Gyabla, the trek goes towards the Ghunsa through the river to the valley. Then we will reach Phale, a Tibetan refugee settlement. We can purchase some of the beautiful creations of human beings here. Then we enter through the forest of pine and conifer to reach the village of Ghunsa. Ghunsa is a beautiful village of Sherpa people. We can see a hydroelectricity plant in this region. Ghunsa is at an altitude of 3,595m above sea level.

You must need a rest day for acclimatization because you are already in a serious mountain area. You will have breakfast late than normal trekking days and then our guide will take you to visit hydropower, old Chorten, and Monastery on the opposite side of Ghunsa village. The afternoon will be perfect for a hot shower and relaxing at the teahouse.

The trail from Kambachen to Lhonak is a bit tougher as it goes through the high altitude through slopes of recent landslide and climbing up the hillside to a pasture land called Rating. We have to acclimatize ourselves during the whole trek at this part of the land. From there you will walk on the moraine of Kanchenjunga glacier till the Lhonak.

Lhonak to Kanchenjunga north base camp (5,143m) 4 hours and back to Khambachen 3-4 hours.

From Lhonak, viewing the Kanchenjunga Mountain above us, we will continue our trail following the Kanchenjunga glaciers. We have to be very careful while walking in this region due to the possibility of landslides and some ice slides also. From the base camp, a little higher point will offer its visitors the most panoramic view of Kanchenjunga, Tent peak, Nepal peak, and Gimmigela Chuli (the twins). We will have lunch at Lhonak and trek back to Khambachen.

From Kambachen, we will return back to Ghunsa following the same trail. We can get a dazzling view of the beautiful forest along with some marvelous view of the White Mountains all around us. The night will be exhilarating at Ghunsa. Best place to stay on your whole trek.

Today Trek to Rani Pool which will take about three hours and after lunch drive to Taplejung.

After breakfast, you drive to Ilam. En route the paved road you will spot some villages and beautiful scenery of fields. After arriving in Ilam you take a walk through a village and stay overnight in Ilam.

Today we will drive to Bhadrapur in the morning which takes 3 hours approximately. Enjoy the last moment of driving through the tea garden of Illam and then descending down to Jhapa district. On arrival at Chandragadhi Airport, you will fly 40 minutes to Kathmandu. After arriving at Kathmandu, we will move towards the room of the hotel to take a rest for some time and can visit the town and the market area later in the day.

We are saying goodbye as your journey to Nepal comes to an end today. If you have more time you can do some shopping or sightseeing. Approximately 3 hours before your scheduled flight a representative from Himalayan Wander walkers will take you to the airport for an outbound flight back to your home country. On your way home you'll have plenty of time to plan your next adventure in the wonderful country of Nepal.

Arrivals and departure transport by car (We will collect you from the Kathmandu international airport) and transfer to Hotel.

3 nights’ accommodation (2 persons per room) in Kathmandu in a 3* standard Hotel with breakfast.

All land transportations (a private car/bus)

Full Board Meal (Breakfast, Lunch and Dinner) during the whole trek.

Government licenced guide and a porter for two people.

* The Price given here is per person based on a minimum of 2 people. The price will be cheaper with an increase in the number of people.

* Single Supplement is applied (Incase if you are single)

CHECKLISTS FOR NORTH BASE CAMP TREK

Guiding, Food, and Lodging
Trekking in Nepal, all trekking supplies - Teahouse trekking means staying and eating in local lodges. We stay in single rooms where possible, but often you will have to share. The rooms are basic, normally just a bed with a pillow, blankets. A few have electric lights and all have a spacious dining room-lounge. We eat at teahouses and, although the food is usually plentiful and delicious, the menu is not extensive. They offer a variety of potatoes, rice and noodle dishes, as well as soup and seasonal vegetables. Beers and local spirits are often available, but that will be at your own cost. A variety of cereals, bread, and egg dishes are generally available for breakfast. There are also snacks available such as basic biscuits, chocolate, and soft drinks and in some areas, you will find fresh fruit in season. It is normal to meet your porter in the teahouse where you will stay overnight. So, pack your necessary things in your own day pack.

Olangchung Gola Trek lies in the Kanchenjunga region in eastern Nepal. Olangchung Gola is also known for Walung in the local language which is actually the name of the village lies in Phaktanglung Rural Municipality of Taplejung district, the last village before crossing the Lumba Sumba Pass. It...